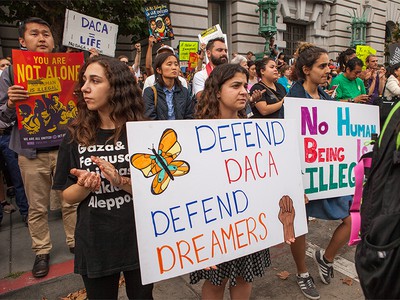 A federal judge’s recent decision ordering the Trump administration to reinstate the DACA (Deferred Action for Childhood Arrivals) program is drawing cautious optimism from immigration/refugee advocates with the Office of the General Assembly. DACA was designed to protect undocumented youth and young adult immigrants from deportation.

Amanda Craft, manager for Advocacy in the Office of Immigration Issues in OGA, says it’s been a long time coming.

“DACA recipients and their allies have been advocating diligently and tirelessly for the reinstatement of the full DACA standards first established under the Obama administration. During these past four years, the Trump administration has tried countless angles to terminate DACA,” said Craft. “The courts have spoken out against those actions. This latest court decision to return to the original intent of the program is another victory for the voices clamoring for justice.”

However, Craft says undocumented youth and young adults are a reminder that DACA is not the complete solution to their dilemma.

“It is a liminal status that protects them, but it is a status that can be revoked. It is not a pathway to citizenship, which would allow them full participation in the United States,” she said. “They are also very aware that their parents remain unprotected from possible arrest, detention and deportation.

Craft says organizations working with undocumented young adults and youth are working closely with the transition team for the incoming Biden administration.

“They are hopeful DACA will continue, but they are pushing for something more permanent like a clean Dream Act,” she said. “There is renewed hope, but it is tempered by the memory of massive deportations under the Obama administration and by the knowledge that it will take an act of Congress to pass the Dream Act.”

For decades the PC(USA) has supported Dreamers, undocumented youths who came to the United States as children. The strong policy support encourages the Church and its members to be actively involved in advocating alongside the voices of the community.

“We are working in coalitions, like the Interfaith Immigration Coalition, who include these voices at the table. Our role is to amplify their voices and encourage others to join in,” said Craft. “We know we have DACA recipients who are members of the PC(USA), and we are determined to fight along with them to seek a lasting and just solution to their immigration status. Their faith propels our hope forward. It is God’s love and grace and justice that sustain that fight.”

Under the federal court order, the current administration has been instructed to allow newly eligible immigrants to file new applications for protection under the program. It is estimated that more than 800,000 individuals have been protected under DACA. More than 300,000 new applicants could be eligible for protection as a result of the order.

The filing fee for each application is approximately $500. If you are interested in donating funds to help young people apply or renew their DACA status, the Informed Immigrant website, a warehouse of a variety of information for immigrants, has a fundraiser established. Their DACA donation page lists numerous organizations that work with DACA recipients. Some are state-based organizations and others are national.