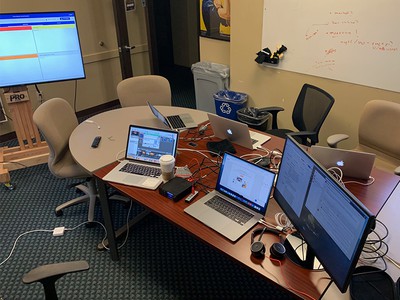 This is the workstation for Nathan Young, who is producing the online 224th General Assembly. —Photo provided.

Final preparations are under way this week for the first fully online General Assembly of the Presbyterian Church (U.S.A.) Normally during the final week, organizers would be traveling to the host city to oversee the layout and production of the PC(USA)’s biggest meeting.

Thanks to the COVID-19 pandemic, organizers had to scrap all of their onsite plans and quickly come up with an online solution.

“We had to re-think accessibility in a setting like this. In a physical assembly, you could walk over and talk with someone about a problem or question how to do something or how make a motion. Now they are on their own. To have the same level of accessibility in a convention center, it took more resources to make that happen,” said Nathan Young, General Assembly producer. “They have to have every opportunity to learn about this and try it out. Helpdesk and training are integral parts of this. There are vast technological abilities across the assembly, and we need to make sure people have the same abilities.”

Young is a seasoned veteran in the General Assembly, having worked in a technical production role for the last six assemblies. This is his first year in a full producer role. He’s been working closely with Vicente Guna, manager of technologies for the Office of the General Assembly, and Julia Henderson, interim director of assembly operations in the OGA.

“It takes a lot. We are doing this a lot faster than we would under different circumstances,” said Guna. “It helps that we were as far as we were in planning when this pandemic started. All of our systems are flexible and scalable enough that we were able to pull this off in a fairly quick period of time.”

Henderson is filling the role vacated by Tom Hay, who retired last year. She was not expecting such a major change midway through the planning, but she says that despite a few bumps, so far, so good.

“There were processes we were trying to improve upon, moving to electronic instead of paper such as the script docket, moving to Google Docs, and Nathan was working with the teleprompter. That process served us well, early on,” said Henderson. “We were able to test these processes in leader briefing and the joint board/committee meeting. We can change the script on the fly if needed.”

The tech team has been working to ensure that the church’s website for General Assembly business, PC-Biz, is up to the task in this new online approach.

“We’re fortunate as a denomination to have PC-Biz as a tool,” said Henderson. “There were some places where we were using paper, but we decided to rely on PC-Biz. We’re working hard to make it possible for someone to fully participate with voice and vote.”

“You have the same exact ability to vote, you have the same exact ability to speak. Those things don’t change. The medium changed,” said Young. “We are doing what we would normally do at a General Assembly; we are just putting our videos on Zoom, that’s the biggest difference. We just had to figure out how to leverage our video and audio platforms remotely and adjust PC-Biz to work in that space.”

General Assembly will be held over three days this month; June 19, 26, and 27. As many as 504 commissioners and 180 advisory delegates will take part. With the addition of corresponding members, approximately 1,000 will participate in the online assembly. The team will pull together a production control room at the Presbyterian Center in Louisville.

“J. Herbert will have a corner of the conference room. Tricia Dykers Koenig will serve as parliamentarian and support, so she will be nearby. In the middle of the room will be the newly elected Co-Moderators where they will have their own area and resources, along with the necessary screens to do their jobs,” said Young. “At the other end of room will be the rest of the tech team; me, an assistant producer, a graphics person, and an individual who will be doing all of the streaming.”

Young says precautions will be made to ensure that the few people in the large conference room are practicing social distancing.

“That’s where everything will be streamed and my world will be giving people the ability to speak and if something goes wrong, that’s where we will manage and resolve issues,” he said. “I really trust this team we have. If we are all within a step of each other, Vicente and Julia can come beside me and we can solve problems. This will be the neuro center or nervous system of GA.”

“We are trying to do two things: generate an online event and make it as vibrant as it can be. Rely on the simplest platform to do that,” said Guna. “We have the reproduction of full parliamentary process and that’s how the power of PC-Biz comes into play.”

Guna says the remainder of the people that will make this possible are scattered around the country.

“Some of our core team will be in other states. We will use chat feature in Microsoft Teams to communicate with one another to discuss issues or update scripts. We’ve got that going for us,” said Henderson. “The other thing that is interesting is Zoom only allows us to have up to 1,000 people. We had to rethink who has voice, resource people, corresponding members to serve as resource people so we don’t add to the number.”

Young says he feels good about language integration for General Assembly. That sentiment is shared by Jason Raff, manager of Global Language Resources for the church. He says the biggest challenge is ensuring that his team provides live, simultaneous interpretation for all worships and plenary sessions from English to Spanish, English to Korean, and the other direction as well.

“We have some commissioners who prefer to address the assembly in their native language and our interpreters are at the ready to make that possible,” Raff said. “The transition to a virtual assembly has actually been something of a blessing for our team, because Zoom has an onboard interpreting feature that allows us to easily jump in and provide live interpreting with an easy user interface for participants.”

Guna, like the others, feels they are setting the bar for what is to come.

“I want to think we are looking at a primitive version of what we will be using for our next General Assembly, that we have room to test and integrate everything on a single platform and use technology to evolve to a more advanced tool,” said Guna. “We can do plenaries, massive and small meetings, video conferencing. I see it everywhere, serving not just assembly, but serving presbyteries, synods, and other organizations.”