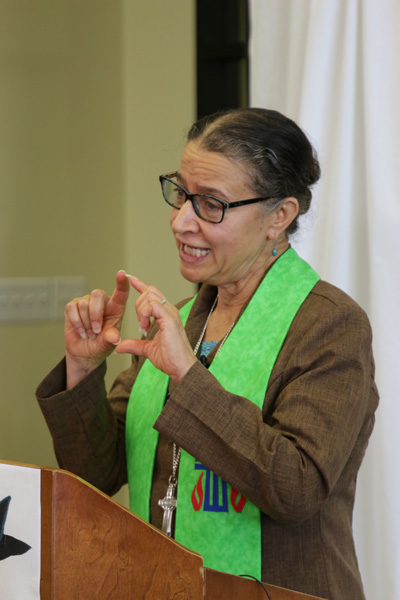 Commissioners to the 224th General Assembly made short work of the docket for their second plenary session Friday, completing their business more than an hour earlier than scheduled.

Their first vote may have been the hardest. The question was whether to reconsider action commissioners took a week ago, referring a number of items to the 225th General Assembly (2022) and agreeing to take on a limited number of items of business during the current online assembly.
The vote was not close: 377 commissioners voted against the motion to reconsider, while 97 voted for the motion.

Friday’s vote means that much of the work that’s been done over the past two years, including reports by the Moving Forward Implementation Commission, the Special Committee on Per Capita and Financial Sustainability, and the report of the Disparities Experienced by Black Women and Girls Task Force, will have to wait two years before being taken up by commissioners to the next assembly.

The reason, of course, is COVID-19. An online assembly precluded the discussion and discernment work that’s normally done in committees when commissioners meet for an in-person assembly.

The Rev. Dr. J. Herbert Nelson, Stated Clerk of the General Assembly of the Presbyterian Church (U.S.A.), told commissioners that the Committee on the General Assembly “took into account the circumstances of an online assembly” before recommending which items to consider now and which ones to defer until 2022.

“We have limited time and the inability to have committees sort out complicated issues,” Nelson said. In addition, he said, approving any amendments to the Book of Order “would raise complex constitutional questions.”

Once the motion to reconsider had been defeated, commissioners heard reports on the proposed unified budget for 2021-22. Commissioners are scheduled to vote on the budget proposal during their final scheduled plenary, which begins at 4:30 p.m. Eastern Time Saturday. Assembly proceedings can be followed online here and here.

In other business Friday afternoon: