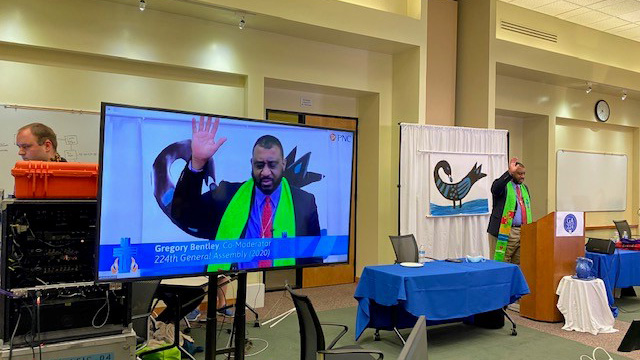 Reverend Gregory Bentley, co-moderator of the 224th General Assembly conducts the closing prayer of the assembly. Photo by Rick Jones

After making dozens of motions and plenty of two-minute speeches, commissioners to the 224th General Assembly (2020) concluded their final online plenary with 8 minutes and 46 seconds of silence.

The silent vigil, the amount of time a Minneapolis police officer put his knee to the neck of George Floyd, was held not only to honor Floyd, but to “remember and repent” for the sins of “ignoring and marginalizing” siblings and churches throughout the denomination, said Elona Street-Stewart, the assembly’s co-moderator together with the Rev. Gregory Bentley. “We will take this silence to be resolved to live out the justice of God’s kin-dom.”

Earlier, the Stated Clerk of the General Assembly of the Presbyterian Church U.S.A., the Rev. Dr. J. Herbert Nelson, II, offered a moving prayer about violence against Black women and girls. Addressing “eternal and gracious Mother God,” Nelson prayed for girls whose “bodies, minds and spirits” have been “broken down in so many ways” that the “only way out would be in ways you did not intend.”

He prayed for the girls’ mothers and other relatives, too, saying, “all they could do is fall to their knees and cry to God who could not be seen, and yet they knew God was there … Help us to repent, to live lives that restore those whose wounds are still there … We need you, Lord. We’re waiting. Our girls, our women — they’re waiting. Their families are waiting. Amen.”

Saturday’s final business was highlighted by the adoption of proposed unified budgets of about $80.1 million for 2021 and about $83.4 million for 2022. Those budgets will cover the work of the Office of the General Assembly, the Administrative Services Group and the Presbyterian Mission Agency.

Commissioners also gave authority to the three boards overseeing the work of each ministry — the Committee on the Office of the General Assembly, the A Corporation Board and the Presbyterian Mission Agency Board, respectively — to approve spending more or less than amounts budgeted for specific line items as a result of emerging situations. The boards had requested that authority to address the ongoing financial implications of the COVID-19 pandemic and other situations that might emerge. Any amendments to the adopted budgets will be reported to the 225th General Assembly.

Commissioners also voted to keep the apportionment rate flat for the next two years, at $8.95 per member.

Representatives from the PMA and A Corp Boards and COGA talked to commissioners about budget priorities for the next two years. A top priority for the PMA is doing the work of the Matthew 25 invitation, by which congregations, mid councils and other groups can agree to work on one of more of three focus areas: building congregational vitality, dismantling structural racism and eradicating systemic poverty.

“Matthew 25 had never been more urgent or relevant than it is now,” the Rev. Dr. Diane Moffett, president and executive director of the PMA, told commissioners. “We’re seeing more and more congregations joining every day even with the pandemic — or maybe because of the pandemic.”

The PMA projects a budget shortfall of about $8.2 million in 2021 and about $6.8 million in 2022. The PMA Board will be dealing with any shortfalls when it meets this fall, said the Rev. Joe Morrow, the Board’s outgoing chair.

Rather than seeking increases in the per capita apportionment, the Office of the General Assembly has been “dipping into reserves for a number of years,” said the Rev. Stephanie Anthony, the vice moderator of COGA. “There are no more reserves available.”

Many congregations and mid councils “are making difficult decisions” about their budgets as well, she said. COGA projects per capita revenue to be sliced by 25 percent this year and next, with a 20-percent reduction forecast for 2022.

“A priority is the support of mid councils,” she said. Presbyteries have the primary responsibility for supporting congregations, “and yet their work continues to get more difficult and complicated every year.”

As in previous assemblies, commissioners concluded their time together in worship.