Home News Looking toward the future

Looking toward the future 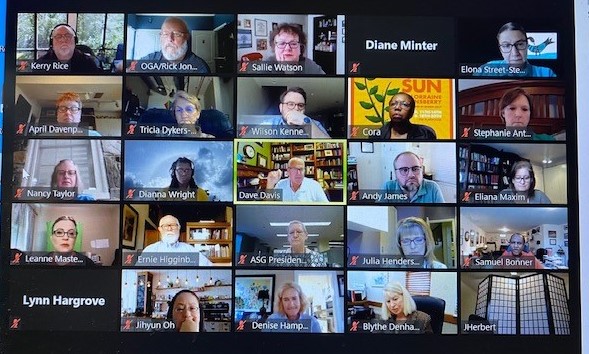 The last time members I of the Committee on the Office of the General Assembly (COGA) met face-to-face was in Baltimore last February. The COVID-19 pandemic has forced the group to meet by Zoom ever since and committee members are addressing topics they didn’t think they would have to face this soon.

The fall meeting opened on Monday with a continued conversation about the church of the 21st century and feedback on the recently completed 224th General Assembly (2020).

“We are continuing to stress innovation and looking at new ways of doing our work,” said the Reverend Dr. J. Herbert Nelson, II, Stated Clerk of the General Assembly of the Presbyterian Church (U.S.A.). “We are a relatively old, wieldy machine, and in a lot of ways, it takes a lot to get us started and get through processes in the life of this denomination.”

As he has said to COGA in past meetings, Nelson emphasized the need to reach and retain young leaders who have new ways of looking at issues and dealing with them.

“They don’t have the history that we have in the life of the church as it relates to race or class issues, and yet they find themselves active in the movement,” he said. “It’s a reminder that the world is changing, young people are changing. The world in which we evangelize has also changed. We have to navigate those experiences and make significant changes in the life of OGA to be effective in the 21st century and build the future church.”

Nelson alluded to the recent social justice actions taken by Presbyterians across the country as a sign the church is still alive.

“I’m glad to see the regaining of that spirit. We are regaining a sense of what it means to be Presbyterian by being active in the public sphere,” he said. “We continue to be involved in ecumenical and judicial work, looking at the impact with regards to a new model of ministry, pressing innovation in a 21st century model.”

COGA also heard updates from two of the three working groups that were formed this summer to focus on some of the key issues facing OGA in the coming months and years.

The group reported out the results of a recently completed churchwide survey to commissioners, corresponding members, and other General Assembly (GA) representatives, saying most participants were satisfied with the first online gathering of a General Assembly, which was held this past summer. Julia Henderson, OGA’s interim director of assembly operations, said many of the respondents desired opportunities for personal fellowship and relationship building.

“Another theme was a desire for a greater diversity of voices on the floor, some feeling that the same individuals were called on repeatedly,” she said. “Many also felt there should have been more time for business and debate, adding that they would have preferred to work through an entire week.”

Henderson told the group high marks were given to Help Desk support, training, and the GA Moderators’ election.

“We will review these results, then do some focus group testing with commissioners and advisory delegates and come back with more information during our monthly COGA meetings,” said Wilson Kennedy.

The working group is tasked with looking at the best way to help the church move forward in the decision-making process. Leanne Masters, who facilitates the group, says one key element came through their recent discussions: missing voices.

“We need the voices of people of color, young people, individuals who are unable to take ten days to attend a General Assembly in person, physically disabled or neurodivergent people,” she said. “We talk about inviting people to the table or opening up the table and that brings an assumption of whose table it is.”

Instead of assuming that people are inexperienced and need to be brought along, Masters says the church needs to take a different approach.

“Why not listen to what they are saying?” she asked. “We have to recognize there are a ton of different ways to do the work we are called to do. How do we make sure the missing voices are heard? Restructure it so all voices are heard.”

In other business on Monday, Ruling Elder Elona Street-Stewart, Co-Moderator of the 224th General Assembly (2020), reported on the first few months in office. She said the recent rise in social justice activity across the country confirmed to both her and Co-Moderator Gregory Bentley that this was the right time to be in their position.

“We didn’t want to be called to be an exhibit for the church. We didn’t want people categorizing us around diversity. That’s not why we are called,” she said. “We feel called home to this church to be engaged at a level that has been blessed by our origins.”

Street-Stewart says they’ve discovered how to live and work in a world that meets through Zoom calls and they’re still working to meet the many requests for Zoom appearances. They’re also looking forward to the opportunity to meet and fellowship with other Presbyterians in person.

“The Earth is crying with pandemic, hurricanes, and fires. We have not moved out of lament. How do we bring comfort and counsel to those who are really impacted in ways that has the most negative consequences for them?” she asked. “There are people crying right now and we want to be able to understand the world in which they live. That’s why Presbyterians need to be present when possible and speak their names.”

Street-Stewart concluded by adding it would be a challenging two years in office, but she and Bentley are here to listen.

COGA will conclude its gathering on Wednesday.