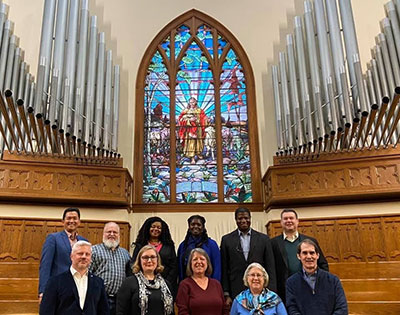 The conversations between the two denominations go back more than 20 years. In the 1960s, former Stated Clerk of the General Assembly of the United Presbyterian Church in the United States of America (UPCUSA), Eugene Carson Blake, initially called for closer collaboration and dialogue among American denominations for “truly catholic, truly reformed, and truly evangelical” fellowship of churches. This led to the formation of the Consultation on Church Union (COCU), which became Churches Uniting in Christ (CUIC). The first official bilateral dialogues between the two ecclesial communions began in 2000.

The first round of the dialogue resulted in an 11-point agreement between the PC(USA) and the Episcopal Church that was ratified by both bodies in 2008. The second and third rounds of the dialogue grew out of the first conversations.

“While several of these points were statements of recognition and affirmation of one-ness, other points called upon the two parties to continue to seek common understanding and common action. The second round of dialogue devoted much energy to issues of oversight, episcope, orders of ministry, and the understanding of ordination,” said Ruling Elder Anne Wainstein Bond, PC(USA) co-chair. “This current round was given a mandate to address full communion/orderly exchange of ministers, the meaning of membership in these bodies, and the role that issues of race and class have played in our understandings of church and our work of ministry and reconciliation.”

Representatives from the Presbyterian Church (U.S.A.) and the Episcopal Church are continuing efforts to find ways to work together in shared mission. The third round of the Episcopal-Presbyterian Bilateral Dialogues met recently via Zoom to discuss ways to “deepen ties and work together.”

The Reverend Dr. Dianna Wright, interim director of ecclesial and ecumenical ministries in the Office of the General Assembly, says the pandemic also factored into the conversation.

“The Dialogue members agreed that their churches are in a season of upheaval due to the scourge of COVID-19 and increased awareness of long-standing problems of racial inequity and other injustices in our society,” said Wright. “At a time when our individual faith communities are struggling to be Christ in the world while stripped of our usual tools of ministry, we are challenged to seek out the critical core of what it means to be the church.”

The Reverend Donald J. McCoid, retired Bishop in the Evangelical Lutheran Church in America (ELCA), was a special guest during the gathering.

“Rev. McCoid was a key figure in working out the agreement for full communion between the Episcopal and ELCA churches,” said Wright. “He worked on the Formula of Agreement with the PC(USA) and some of their full communion partners. McCoid shared his experience in ecumenical outreach and the challenges inherent in that ministry. He also shared his insights concerning the particular issues facing Episcopalians and Presbyterians engaged in that work.”

“Both churches are desirous for closer relationship by trying out a limited exchange of our ordained ministers, as authorized by our respective regional councils (presbytery for us and diocese for Episcopalians),” said Presa. “Second, we have deepened exploration and discussion on that two-word phrase: full communion. We certainly are not there yet until we can mutually reconcile our ordained offices, but this proposal for limited exchange of ordained ministers takes a major step forward towards that future.”

“The ultimate goal for this third round would be a greater sense and deeper appreciation that we as Episcopalians and Presbyterians have always been part of the same family but with distinctive practices, and that ministry at the local and regional levels have been quite flexible in being a part of God’s mission in the world through joint ecumenical collaboration, and in some cases, living out what it means to be full communion partners on the ground even when it wasn’t official policy from the national levels of both churches,” said Presa. “This is all to say that Presbyterians and Episcopalians have come a long way from the 1960s from COCU, from CUIC, and where we are headed together.”

The Bilateral Dialogue will convene again via Zoom in February and is scheduled to hear from a theologian, the Reverend Dr. Amy Plantinga Pauw of Louisville Presbyterian Theological Seminary, to discuss her recent book on a wisdom ecclesiology, and how churches live out witness and mission in a 21st century context of great challenge.

“We will further discuss and refine the proposal for a limited exchange of ordained ministers,” said Presa. “All of this will be done in the context of worship, of prayer, and of open, collegial, sacred conversations!”

“I am very much looking forward to the coming 'gatherings' of the dialogue team, both for the rich and deep content of our discussions, the experience of worship from both traditions (even via Zoom), and the fellowship and sharing of these times with open, thoughtful, faithful colleagues,” said Bond. “Several of the participants from both ecclesial traditions were part of the last round, and many are newer in the conversations, but each brings a distinct role and experience within her/his ecclesial community which provides a broad range of perspectives and contributions to the work of the dialogue team.”