Home News Healing the wounds of separation and loss

Healing the wounds of separation and loss

The final session of the virtual Polity, Benefits, and Mission Conference wrapped up Friday afternoon with more conversation around plans for the 225th General Assembly of the Presbyterian Church (U.S.A.) and words of encouragement as the pandemic continues.

Kate Trigger Duffert, manager of GA Business and Per Capita for the Office of the General Assembly, provided an overview of the business that is currently slated to be brought before the Assembly next summer.

Kate Trigger Duffert, OGA’s manager for GA Business and Per Capita, provides an overview of some of the business items that will be brought before the 225th General Assembly next year.

“With all of the referrals coming in, we have a good handle of what will be coming to the Assembly,” she said. “Currently 47 overtures from mid councils are in and there are two new ones that did not come from referral. There is a lot that has been gathered in the last three to four years.”

A number of business items to be considered for the 225th General Assembly currently fall into several overall categories; environmental justice, antiracism, equity in the denomination and peacemaking.

“We are grieving our continued inability to gather in each other’s physical presence. Zoom is a wonderful tool that has kept us connected in some ways, but it is just not the same and we are concerned that when technology is key, those without reliable access are excluded,” said the Rev. Tricia Dykers-Koenig, OGA’s associate director of Mid Council Relations. “We lament feeling disconnected and lament the persistent reality of racism and white supremacy.” 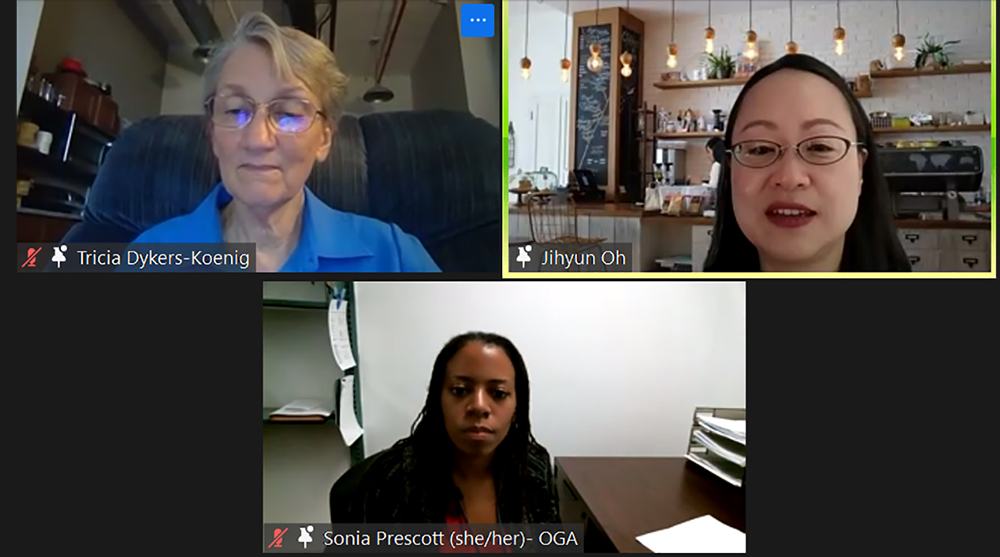 The Revs. Tricia Dykers-Koenig and Jihyun Oh with Mid Council Ministries and Sonia Prescott with the Presbyterian Historical Society speak during the final session of the conference.

Dykers-Koenig added that the divides “so evident in our nation” are showing up in churches, too.

“We lament the ways we feel ill-equipped for the challenges. Is the future hybrid — and is it possible to do that well? Who’s getting left behind?” she asked. “How do we communicate ideas and resources and the blessings of our connectionalism to the settings where the vast majority of Presbyterians are living out their values, their faith — not in presbyteries, synods or national agencies, but in congregations?”

The Rev. Dr. J. Herbert Nelson, II, Stated Clerk of the General Assembly of the PC(USA), addressed the conference from his office at the Presbyterian Center. 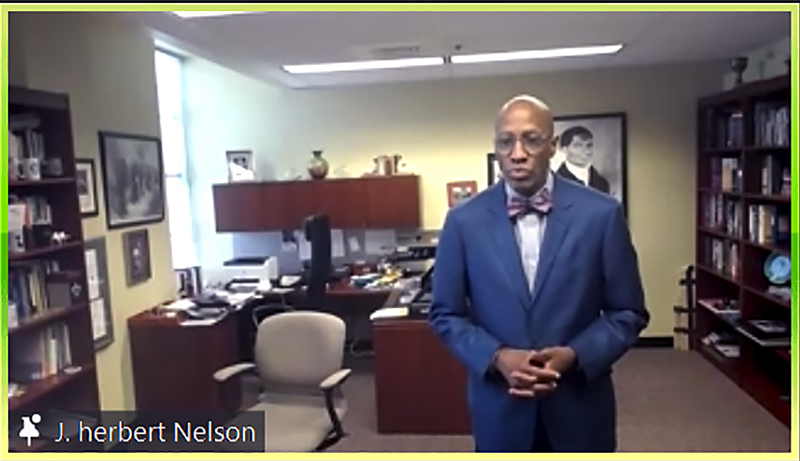 The Rev. Dr. J. Herbert Nelson, II, Stated Clerk of the General Assembly of the PC(USA), addressed attendees at the Policy, Benefits, and Mission Conference.

The Rev. Dr. J. Herbert Nelson, II, Stated Clerk of the General Assembly of the PC(USA), addressed attendees at the Policy, Benefits, and Mission Conference.

“The world has changed, and we find ourselves falling behind in the life of the church,” said Nelson. “We struggle to put together a GA in the midst of what could be another variant and still try to be the church that struggles through places that are oftentimes left behind. What does it mean to spread the gospel and be keepers of God’s promise?”

“The best thing we know to do right now is to bring mid council leaders together to pray, study and share some of the things we’ve learned in these moments,” said Nelson. “How do we help each other in these moments? Burnout and not knowing what to do can be overcoming.”

Nelson alluded to the stress facing pastors and other church leaders over the past year and a half as the COVID-19 pandemic has impacted church attendance and ministry.

“Inward pressures and pains are being pressed on one another, including our churches, congregations and preachers,” said Nelson. “So many preachers have left the pulpit in these times and it’s hard for those of us of faith to explain to someone else the struggles they are going through when we are going through the same things.”

The Rev. Dr. Diane Moffett, president and executive director of the Presbyterian Mission Agency; the Rev. Dr. J. Herbert Nelson, II; and the Rev. Frank Clark Spencer, president of the Board of Pensions, concluded the conference Friday afternoon.

Nelson concluded his remarks saying he believed one of the central roles of his office is to be “wounded healers,” helping others who struggle while the national office struggles as well.

OGA’s Mid Council Ministries will be looking at feedback from conference attendees to determine the best ways to approach concerns and interests in the coming months.

The conference, co-sponsored by the Board of Pensions, OGA and the Presbyterian Mission Agency, took the place of the Mid Council Leaders Gathering that has been held for the past several years. Next year’s conference is tentatively scheduled for Oct. 12–17, 2022.