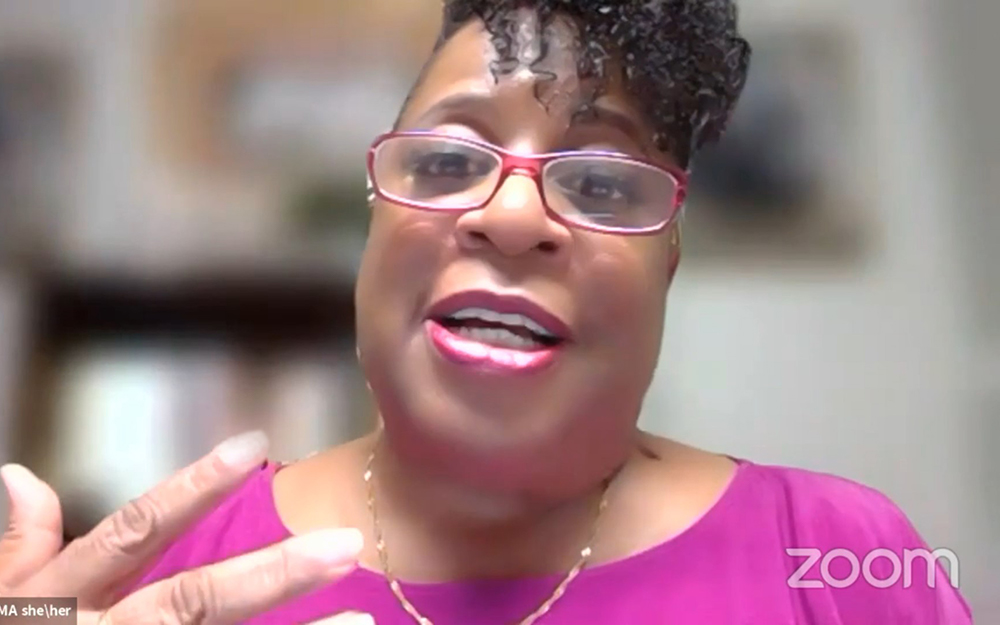 The Rev. Dr. Diane Moffett discusses antiracism during the broadcast of Good Medicine on October 13, 2021.

The Rev. Dr. Diane Moffett discusses antiracism during the broadcast of Good Medicine on October 13, 2021.

The Matthew 25 vision challenges the PC(USA) to “see the ways to reform, rethink and reimagine how we engage in this world that needs our witness now, to point people to another reality and another way of being that invites all God’s children to the table,” the Rev. Dr. Diane Moffett, president and executive director of the Presbyterian Mission Agency (PMA), said during the October broadcast of “Good Medicine,” hosted by the Rev. Gregory Bentley and Ruling Elder Elona Street-Stewart, Co-Moderators of the 224th General Assembly (2020).

Matthew 25 is an invitation for Presbyterian congregations, mid councils, and other related organizations and agencies to actively engage in the world around them. Both the 222nd and 223rd General Assemblies (2016 and 2018) called on the PC(USA) to act boldly and compassionately to build congregational vitality, dismantle structural racism and eradicate systemic poverty.

To kick off the Good Medicine conversation, Moffett was asked to address how Matthew 25 speaks to decolonization. She said it’s about dismantling systems that “take away hope, and hurt and harm God’s people.”

She described colonization as the “division, control and exploitation of people and resources to benefit the colonizer,” and decolonization as undoing these systems “so that we are able to connect again and … reestablish the dignity of a variety of people of color, who have many different cultures and languages that are by design by God.” She envisions rebuilding a culture that is “life-giving to those who have been pressed to the edge.”

“We’re really talking about doing something different and creating something that more aligns with the kingdom that Jesus speaks of in Matthew 25, when he says that at the end time all the nations are going to be judged by how they are treating the least of these,” said Moffett.

The Presbyterian Mission Agency has been applying the values of Matthew 25 to its recent visioning work. Moffett said the PMA is focusing on how to “minister, serve and bear witness to Christ in the 21st century … and seeking to reestablish a culture that aligns with the kingdom where the last are first, where those who are marginalized become the center of ministry.”

The PMA began by looking at themselves, she said, and their own “dominating, hierarchical systems that create competition, people in the same organization fighting against each other and not seeing the community as one.” They are working to turn these insights into ways to reform, then carry this out into the church and “challenging the church as to what kind of systems we are perpetuating that take away hope.”

In the 30 months since Matthew 25 was introduced, 10 synods, 70 presbyteries and nearly 900 congregations have officially committed to the invitation, as have Presbyterian Women, various GA agencies, and some colleges and universities. Moffett describes this commitment as “Presbyterians standing together. We’re making disciples and believers who understand we’re saved to serve and those who are on the margins are the center of our ministry. We are going to be dealing with systemic poverty, racism and oppression, and as a church we believe God has called us to speak out and correct this.”

Moffett noted that Matthew 25 is broad enough that she believes “most of us are already doing the work at some level. It’s not a program; it’s basically a scriptural vision — and how you live into it domestically and internationally, and how does it work in your community. We want to lift up and celebrate the work.” It is a collective effort to say “we are followers of Jesus, we are people of the Way, and point people to the reality of who God is and be transformed … and create a world that is more just.”

As the demographics of the nation rapidly change, Moffett said she wants the witness and work of the church to not only strengthen but also remain relevant. “All of us are in this together, and we’ve got to respect and honor that all of life is precious. It all comes from God. We are created in the image of God, and we are created to be different. And difference is not deficient.”

Street-Stewart noted that decolonization is a matter of “restoring and repairing.”

“The imperial practices of violence and oppression are not part of decolonization. It’s not to say we’re going to do with you what you did to us, and we’re going to take over,” said Street-Stewart. “It’s a matter of saying these gifts are really for everyone, and we want to repair what has been damaged and broken. That’s also the message around Matthew 25 — let’s talk about these systems that perpetuate the injustice … what can we do to repent those things and move forward. We are endowed with gifts of healing as the Church, so let’s use those to bring the healing.”

To see and hear the entire broadcast, click here. “Good Medicine” is presented live on the second Wednesday of the month at 2 p.m. Eastern time on the 224th General Assembly Co-Moderators Facebook page.