Home News After the storm

Have a recent story of ecumenical or interreligious cooperation to share with GACEIR? Please email me.
— Dr. Dianna Wright, GACIER staff member 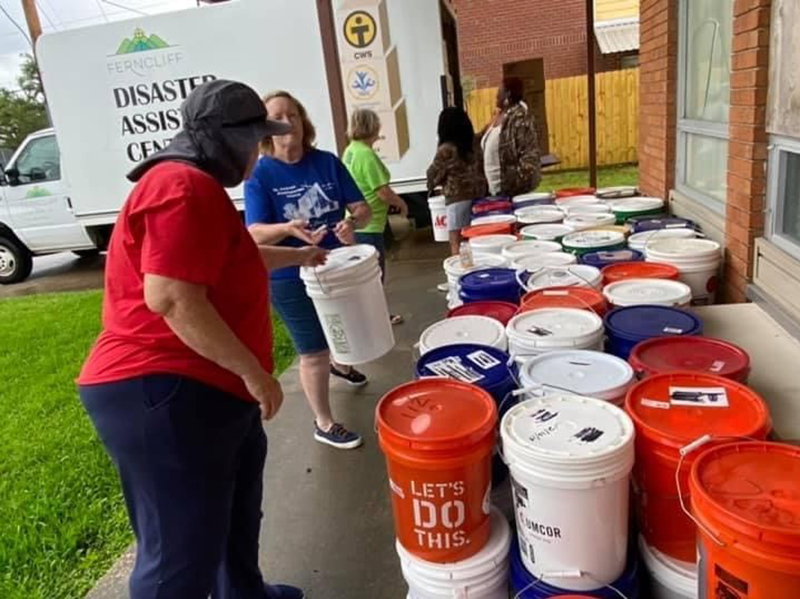 “In Southwest Louisiana we talk of life before the storms and after the storms,” said CRE Nanette Cagney, pastor at St. Andrew Presbyterian Church in Lake Charles.

The “storms” are August 2020’s Hurricane Laura, followed by October’s Hurricane Delta, two of the five named disasters to hit the area in the last year. The “we” is everyone in Southwest Louisiana, including the patchwork of community groups that have come together in unprecedented ways to rebuild in the wake of recurring devastation.

Many of Lake Charles’ community groups work out of area congregations with different denominational or religious affiliations.

In a recent phone call she described some of the ways worshiping communities in Lake Charles have come together after the storms.

She also praised a new spirit of cooperation between PC(USA) congregations, showing that Presbyterians in Louisiana are working together across historic divides to “love your neighbor as yourself” — a pillar of the church’s interreligious stance.

The five major storms since Hurricane Laura have included a 12-hour period in May 2021 when 15 inches of rain fell in Lake Charles, and Hurricane Ida, which hit Louisiana on August 29, the 16th anniversary of Hurricane Katrina.

Each new weather event hampered repair and recovery work. Many businesses and other institutions the community relies on have remained closed for months.

Beyond damaging buildings and vital infrastructure, the storms made basic food provision difficult. Cagney said that Lake Charles’ north side, which is predominantly African American, “is a food desert with no grocery stores” as recently as last month.

For Mother’s Day, “the best gift turned out to be fruit and vegetables,” which were distributed to residents of north Lake Charles by the Vessel Project at St Andrew.

St. Andrew Presbyterian Church, where Cagney has been the commissioned ruling elder since 2006, is hardly new to interreligious and ecumenical work.

Prior to 2020 the PC(USA) congregation teamed up with a local mosque and synagogue to facilitate antiviolence worship services and hold Q&A sessions about Islam. For the last 15 years St. Andrew has participated in a group called Women in Ministry, joining nondenominational, Methodist, Disciples of Christ, Catholic, Muslim, Episcopal, Presbyterian and most recently Pentecostal women once a month for networking and support.

After Hurricane Laura in August 2020, St. Andrew broadened its collaborative ministry, working with what Cagney called “a larger coalition of faiths” to address the pressing needs created by recent storms, including the widespread food shortages.

“We are working together across lines to get whatever needs to be done,” she said. 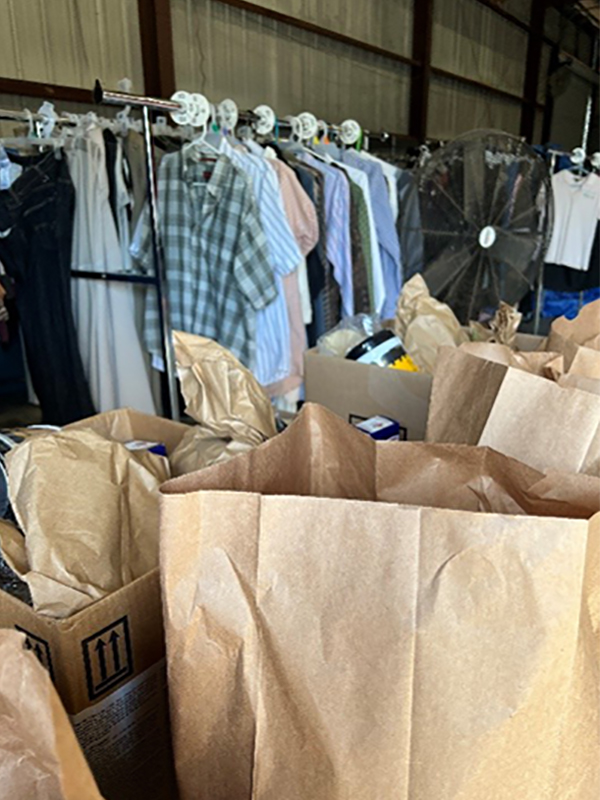 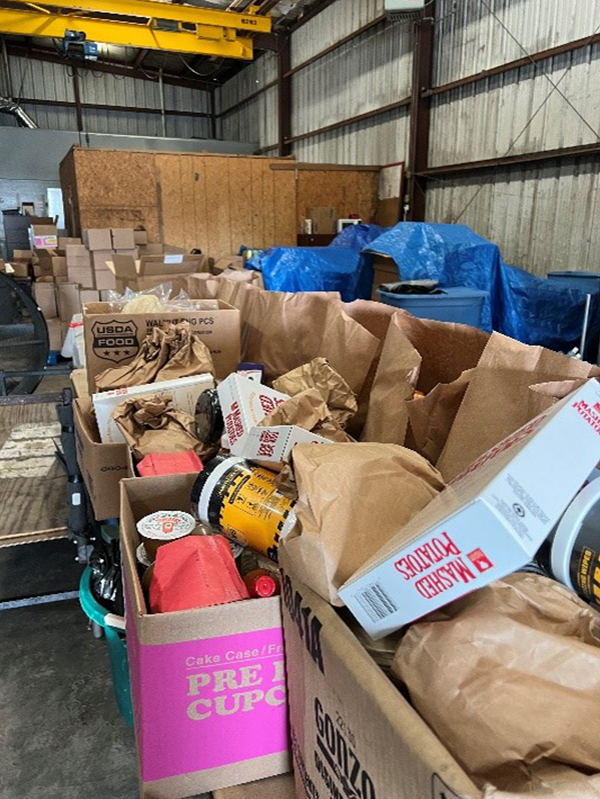 Specific examples of ecumenical collaboration Cagney cited include the following:

The United Christian Fellowship is an exciting new venture that is especially important to St. Andrew, which is located across the street from the campus of McNeese State University.

St. Andrew is also teaming up the Vessel Project and Water’s Edge Homeless ministry, facilitated by a PDA community grant, to assist with Lake Charles’s housing crisis and homeless population.

“Housing costs have been astronomical because of the storms,” Cagney said. “Reasonably affordable housing after storm damage is extremely hard to find.”

Cagney also praised Presbyterians for working inside the denomination following the storms.

The Synod of the Sun, which includes presbyteries in Louisiana and Texas, “was very helpful, bringing food to the area and providing a grant for a summer feeding program through the Vessel Project.” 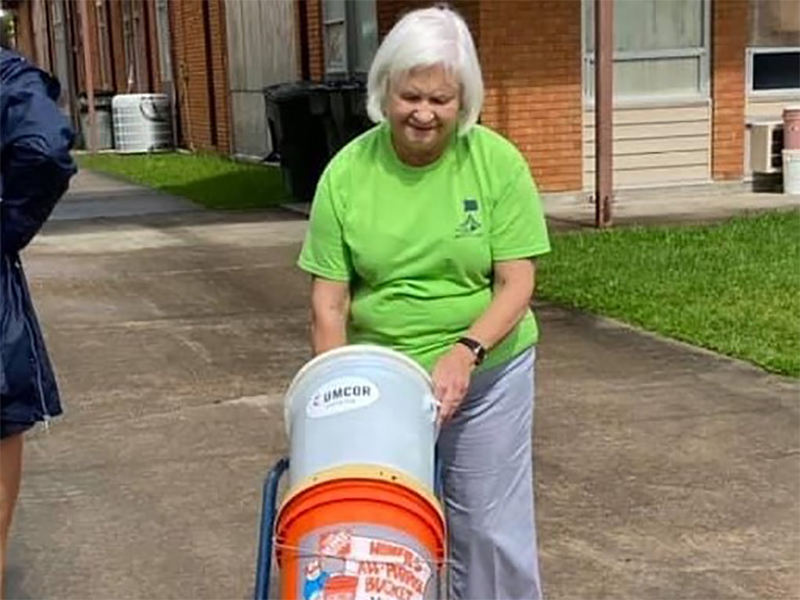 “The First Presbyterian Church of Scotlandville has been a godsend,” Cagney said, “connecting us to Black churches in the north of Lake Charles.

“We’ve wanted for years to have a closer relationship with churches on the north side of town. Scotlandville has opened doors.”

Cagney said that the Scotlandville-led discussions have gone a long way toward helping to repair race relations between churches in Lake Charles.

“These types of coalitions are forming across the Presbytery of South Louisiana as we join together to rebuild after horrible devastation,” she said.

When asked what might be next for Lake Charles collaborations — ecumenical, interreligious or Presbyterian — Cagney said that congregations were discussing other ways to do outreach together, “such as community gardens, little free food pantries and joint Taize and Advent services.”

One thing is for sure for Southwest Louisiana and other areas seeking repair following difficult times: the most impactful responses draw on a wide array of community talents and resources. In Lake Charles, storm recovery has been that much stronger for connecting congregations and faiths.