Syria at 10 years since the March 2011 Arab Spring Uprising 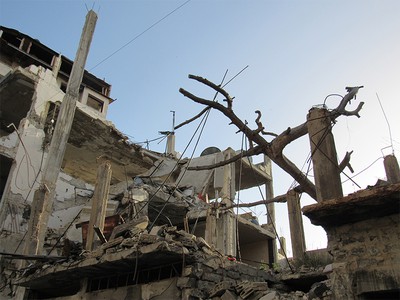 It has been 10 years since the eruption of the popular uprising known as the Arab Spring began in Syria. We grieve the past 10 years that the Syrian people have been battered by the many forces that have created a catastrophic situation in their country. The conflict has led to countless deaths, millions of displaced people, widespread destruction of physical infrastructure and nearly 3 million Syrians who are currently at risk or are food insecure. A shortage of essential goods, resulting in skyrocketing prices and a great erosion of purchasing power, as well as widespread unemployment are a result of U.S. government-led sanctions. A severely devalued currency and the challenge of COVID-19 have left 82% of the Syrian population living under the poverty line. The government now finds itself starved for funds required to meet the needs of the people of the country.

We pledge our solidarity with the Syrian people, especially the families and pastors who comprise the National Evangelical Synod of Syria and Lebanon (NESSL). The 223rd General Assembly (2018) of the Presbyterian Church (U.S.A.) affirmed in part that U.S. government leaders should “revise the current program of economic sanctions on Syria so as to reduce their painful impact on ordinary Syrian families and on religious, civic, educational and medical bodies unassociated with any form of terrorism.”

In a recent communication, the Rev. Dr. Joseph Kassab, the General Secretary of the NESSL, said, “The continuation of the sanctions will lead to more impoverishment and suffering for the population of the country. These sanctions aim to impede the reconstruction process required to achieve the basic stability that enables the displaced to return to their areas, secure jobs and return to a normal life. The threat of the Caesar Act to penalize countries such as China, the United Arab Emirates (UAE) and Russia that may seek to finance and implement reconstruction operations in Syria is by itself penalizing the ordinary Syrians and their rights to work and live in dignity.”

While the way forward through diplomacy is surely a rocky one, it is hard to see any other way in which the sanctions can be lifted and financial assistance can begin to flow to the Syrian people. May God guide all those who seek relief for those suffering in Syria toward a path of compassion, peace and justice.

A four-session study guide on Presbyterian mission involvement and political considerations, called "Syria: The Burden of Memory and the Hope of the Gospel," was created by the Syria Lebanon Partnership Network (SLPN) in 2018 and is available through the PC(USA) bookstore. The cost is $5 (10 or more at a discount).

The SLPN invites all to their Spring Gathering on April 13 via Zoom from noon through 2 p.m. Eastern Time to discuss issues affecting the Syrian people. See this PC(USA) news article for more information: https://www.presbyterianmission.org/story/what-is-happening-in-syria-and-why/?utm_source=ActiveCampaign&utm_medium=email&utm_content=Presbyterian+Church+USA+Weekly+News&utm_campaign=Weekly+News+-March+17-23+2021

Information was compiled by members of the Syria Lebanon Partnership Network of the PC(USA).