The good medicine is there, but do we want to take it? 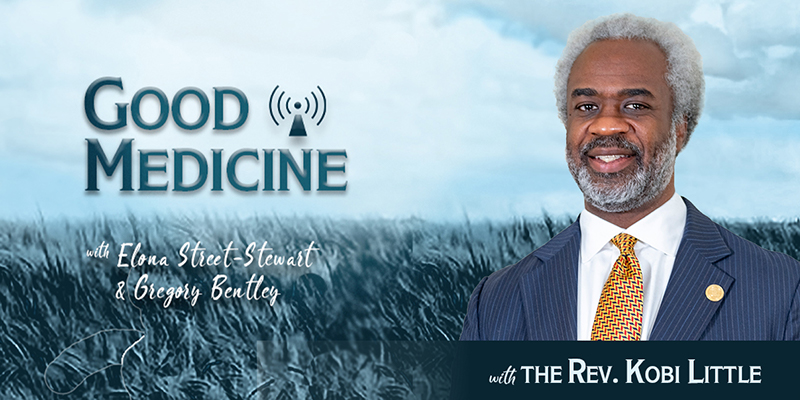 The “first order of business” for the church is to bring about more humane and justice-oriented politics, the Rev. Kobi Little said during the April broadcast of “Good Medicine,” hosted by the Rev. Gregory Bentley and Ruling Elder Elona Street-Stewart, Co-Moderators of the 224th General Assembly (2020).

Little is a global citizen, strategic advisor, public policy advocate and faith leader. He is president of the Baltimore NAACP and vice president and political action chairman of the Maryland State Conference of the NAACP. He is also the dean of Justice Chapel.

Little said the conversation about decolonizing politics must begin with defining white supremacist colonization, sharing four words that come to mind for him: “invasion, hegemony, hate and exploitation.”

These defining characteristics are still manifested in a world impacted by colonization. “In contemporary America is a desire to maintain the status quo, a desire to focus on profit rather than people, because colonies are founded for the purpose of extracting resources and exploiting those resources for profit. And we see the structural inequity and systemic racism that are the byproducts of hegemony and hate,” Little said. “So, the challenge for us is to identify, own and accept the colonial reality, and then to unpack what that reality is so we can equip ourselves to be free of it.”

The church’s role in bringing about change has been modeled by Moses, the prophets, Jesus, and Paul and the Acts church, Little said. “What we are called to as believers is to not be conformed of this world, not to accept the status quo, but to be transformed by the renewing of our minds and use that … new self and new lens to create the beloved community. That actually is the Great Commission — to observe all of the things I (Jesus) have taught you, and to then go into the world and share all of these teachings. And Jesus’ most central teachings were about creating a world where the focus is on the most vulnerable. That’s why he says the last shall be first, and that’s why he consistently teaches servant leadership.”

Street-Stewart pointed out that “what is so horrific, the Great Commission became license to appropriate and exploit. As Indigenous people, we do not lift ourselves under a banner of the Great Commission. To share the gospel was good medicine … versus going out to all the world and claiming people, still under these doctrines of dominion, so that they could be exploited on behalf of the Christian empires.”

Little responded, saying, “The church has not only been complicit with colonization, but the church has in error and in sin used the gospel to colonize and to disempower and to capture people; wherein Jesus proclaims the gospel is in fact to enlighten, to liberate and to advance. The only way the church can really repent of this great sin and this misuse of the Great Commission is to be forthright and make the commitment to consistently be anti-colonial, pro-liberation, pro-equality and pro-equity.”

It is important to challenge, question and analyze assumptions inherited from the colonial system, such as, “Police don’t lie; police don’t beat people unless they deserve it. … If it’s good for Wall Street, then it’ll be good for the rest of country,” Little said. “Even as people of color or even as justice-loving people, we are complicit with the ongoing legacy of colonization. So, each of us has a responsibility to hear those words of Scripture that say be not conformed to this world … and be reborn, renewed, transformed when your understanding changes.

“One of the things we see when reading the Scriptures is that medicine begins through good thoughts and good words. Colonialism, hate, hegemony are diseases. These things we must cure, and we must first identify them in ourselves and cure them in ourselves,” Little said. “We hear Jesus say, ‘Do you want to be made whole?’ As we share the good medicine, we must see that it is a process of giving and receiving, but it’s also a question of do we want to be whole. The good medicine is there; the question is do we want to take it.”

The participants shared some resources that can begin, as Bentley said, the “journey of reorienting ourselves toward the truth and owning up to the mythologies and propaganda that we’ve swallowed as truth, so that we can really begin to work toward creating the conditions that enable all of us to flourish together.” The resources include:

To see and hear the entire broadcast, click here. “Good Medicine” is presented live on the second Wednesday of the month at 2 p.m. (Eastern Time) on the GA Moderators Facebook page.