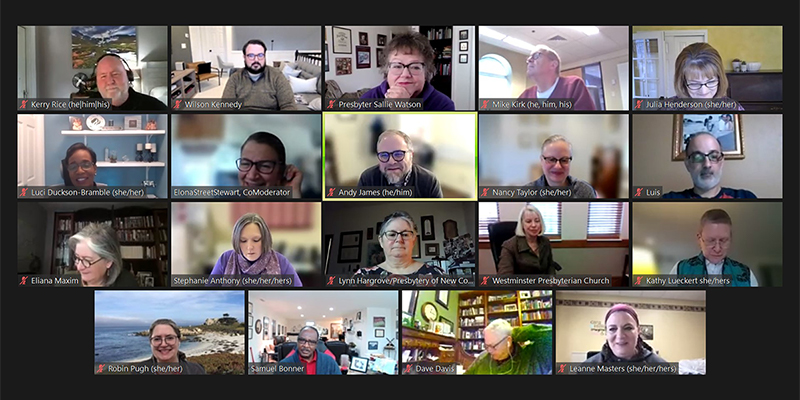 On Thursday members of the Committee on the Office of the General Assembly (COGA) continued their monthly discussions about plans for this summer’s hybrid assembly.

With only 150 days until the 225th General Assembly, the committee focused on possible changes to standing rules and recent policy decisions about attendance. After an assembly committee leadership selection update, COGA circled back to a topic from its December meeting: finalizing the lineup of assembly committees.

Teaching Elder Andy James gave a report from the Standing Rules Working Group and asked for feedback to a proposed change about shortening the allowable text length of business items, including reports from entities, commissions and GA committees. One reason to shorten texts is the associated cost of translation. The change would be in effect for the 226th General Assembly in 2024.

Ensuing discussion focused on the varying lengths of presbytery overtures, which currently have no word limit including recommendation and rationale sections.

Teaching Elder Eliana Maxim said that shortening the text length of business items “is definitely something we should pursue,” in order to stay committed to goals of broadening access through translation.

Ideas for encouraging presbyteries to honor the current word count included setting limits on the characters a presbytery can key into PC-Biz, the denomination's business application, and additional training so presbyteries can share the responsibility of using assembly resources equably.

Kerry Rice, Deputy Stated Clerk, addressed the decisions, which were made in consideration of ongoing pandemic conditions. The policies include the following:

Regarding the first decision, Ruling Elder Samuel Bonner asked, “Does the policy mean you can’t be a voting member [of a committee] if you don’t get a vaccine or booster?” Rice responded, “Yes.”

Members voiced support for the policies, even as they discussed the certainty some will take issue with the decision. Teaching Elder Lynn Hargrove raised the possibility of presbyteries needing to replace commissioners who disagree with the attendance policies.

“This is all about risk-tolerance,” Rice said. Earlier, he and Nelson described meetings with health experts who said any in-person gathering raises the possibility of community spread of COVID-19 in Louisville and parts of the country where commissioners and advisory delegates travel to. The policy decisions were made in order to mitigate the possibility of people being exposed to the coronavirus.

The decisions, emailed that afternoon to mid council leaders via the Mid Council Relations newsletter, were affirmed by COGA during Thursday’s meeting.

valerie izumi, Assistant Stated Clerk and Coordinator for General Assembly Nominations, gave an update on the process for the Co-Moderators of GA224 to select leaders of assembly committees for GA225.

izumi reminded COGA that GA224 in 2020 was the first assembly where individuals could self-nominate, a process that has been continued for GA225 and is designed to enhance diversity and make it easier for more commissioners to participate.

The meeting ended with an update from COGA’s December meeting: the emerging structure and scheduling rationale for GA225 committees. 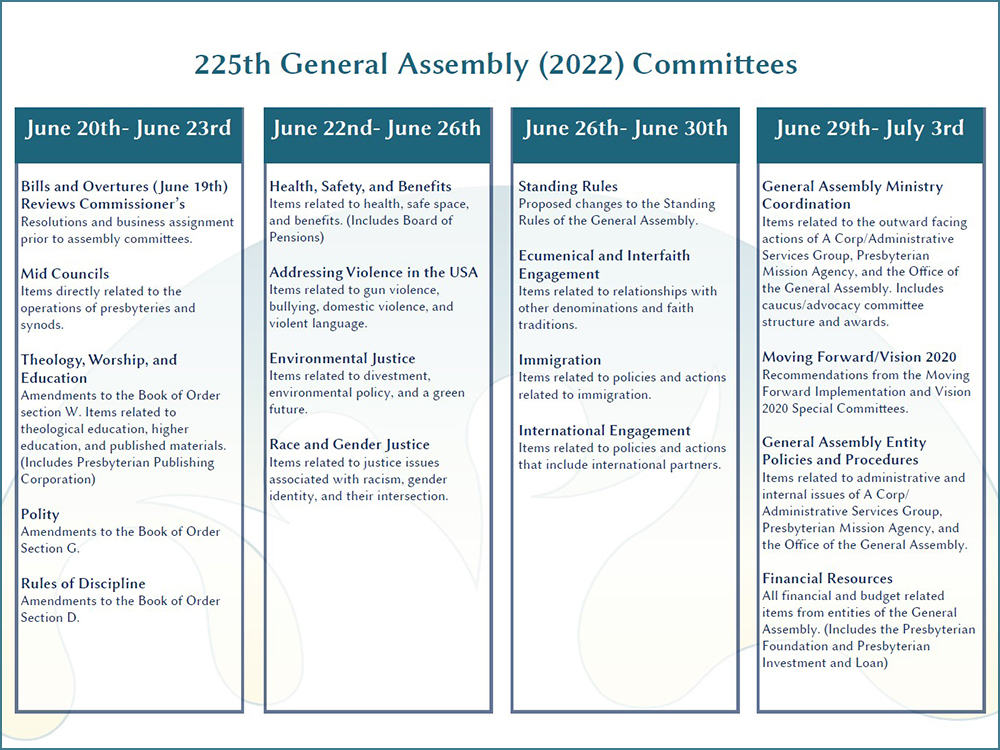 Kate Trigger Duffert, Manager for GA Business and Per Capita Promotion, shared an updated list of 16 planned committees, as well as the planned meeting schedule. As with assembly breaks, committees will be staggered to limit crowding in shared spaces, including hallways.  Non-voting assembly participants will be able to experience the committees online.

Trigger Duffert explained that committees tasked with considering overall financial implications will meet last. The finalized committees and their schedule will soon be entered into PC-Biz.

COGA members shared their enthusiasm for the work done to date, with Teaching Elder Wilson Kennedy saying that the staggered schedule makes it easier for all to participate in the assembly, and for the work of committees to be taken up during plenary.

Teaching Elder Stephanie Anthony, COGA Moderator, adjourned the meeting after mentioning the next gathering on February 7-9.