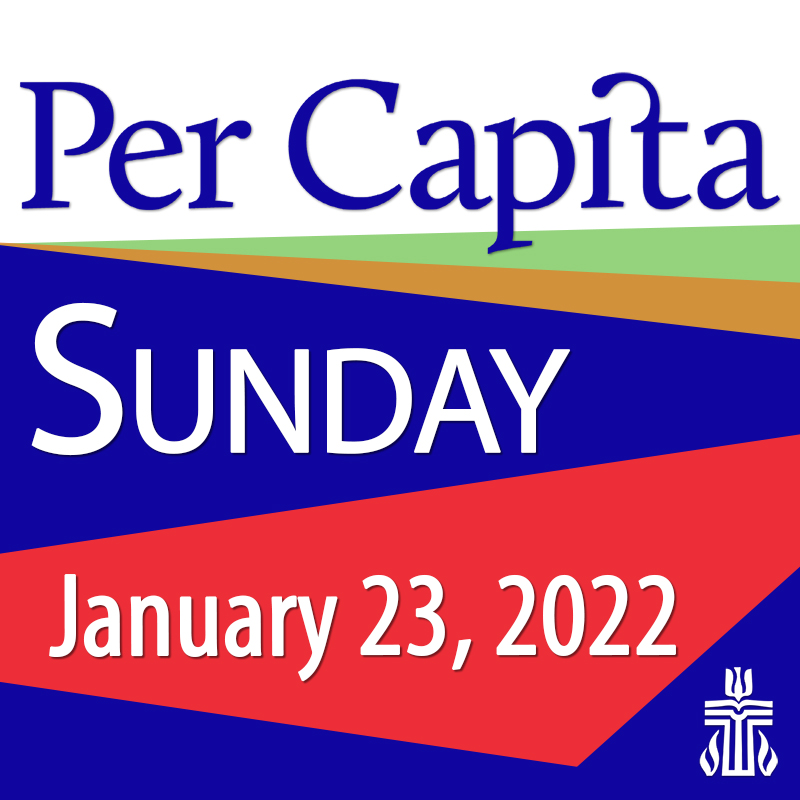 A new celebration Sunday has been added to the PC(USA) calendar: Per Capita Sunday.

According to the Per Capita Sunday web page, “On January 23, 2022, Presbyterians are invited to center their worship services around the ways in which we are called into mutual support and ministry through per capita giving.”

Helping to center those worship services are resources congregations can download, including a Per Capita Sunday Liturgy with scripture from 1 Corinthians 12:12–31, “a reminder that all parts of the church are parts of one body.”

The Per Capita Sunday page provides guidance for using the new resources. Text or videos can be placed inside congregational presentations or shared via websites and social media.

“The idea is to provide congregations with resources to help with their own conversations about per capita,” said Kate Trigger Duffert, Manager for GA Business in the Office of the General Assembly (OGA) and writer of the Per Capita Sunday Liturgy.

“We’re hoping January is a good time,” she said, with many congregational and mid council budget meetings scheduled for early in the year.

Staff of OGA and the Presbyterian Mission Agency (PMA) collaborated with volunteers to produce the resources, including minutes-for-mission videos. Trigger Duffert gave special credit to Dr. Bill McConnell, a mission engagement advisor for PMA, the Rev. Dr. Timothy Hart-Andersen of Westminster Presbyterian Church in Minneapolis, and Co-Moderator of the 224th General Assembly Elona Street-Stewart, for leading the effort. 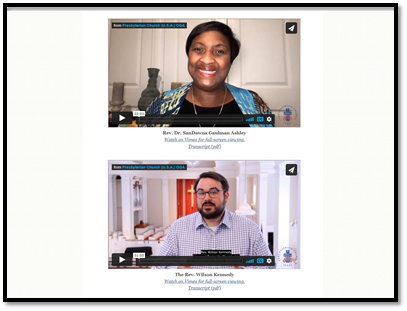 According to pcusa.org, “Per capita connects Presbyterian Church (U.S.A.) congregations and mid councils with the work of the wider church. As the primary source of OGA support, it is how Presbyterians mutually and equitably share the costs of moving the church forward in the 21st century.”

The national church per capita rate each member of a PC(USA) congregation is asked to contribute is $8.98 per year. In the previous funding-cycle the amount was $8.95.

Trigger Duffert said Per Capita Sunday was partly inspired by Special Offering Sundays that raise financial support for PMA mission projects. The Per Capita Sunday materials do not ask congregations to take up an offering, instead showing the impact of budgeted per capita remittances.

In an email, McConnell highlighted two recent per capita conversion stories that make the case for national church support in a time of diminishing budgets and personnel changes.

In one story from Presbyterians Today, Hart-Andersen writes about the assistance the national church provides to congregations and mid councils during times of crisis.

“We are not often aware of the value of per capita,” Hart-Andersen wrote, “but it is there all the time — especially when we need it.”

In the second story, the Rev. Andrew Kukla of First Presbyterian Church of Boise acknowledged on Facebook that he used to be “one of those 'get rid of per capita' people” before explaining his newfound support. Now his congregation contributes “more than the required amount … as part of our covenantal relationship to the larger denomination.”

Kukla’s post is linked to in a recent blog post by the Rev. Dr. Jan Edmiston, Co-Moderator of the 222rd General Assembly, where she also makes the case for denominational giving.

“If you see that God’s will is being carried out in terms of the bigger picture,” Edmiston wrote, “I hope you’ll embrace the gift of being part of a connectional Church.”

The national church plans to create more per capita resources after this year’s Per Capita Sunday effort is evaluated, said Trigger Duffert. She encouraged anyone with feedback about resources to email the per capita team.

In one of the Minutes for Mission videos, the Rev. Juan Sarmiento, Executive Presbyter or the Presbytery of San Fernando, reflects in Spanish and English on how per capita helped him be received as a Minister of Word and Sacrament into the PC(USA) and later participate in a General Assembly — moments that show per capita nourishing the full body of the church.

“I am truly grateful for the things that our per capita contributions make possible!” Sarmiento said. “And I thank you for your commitment to it.”