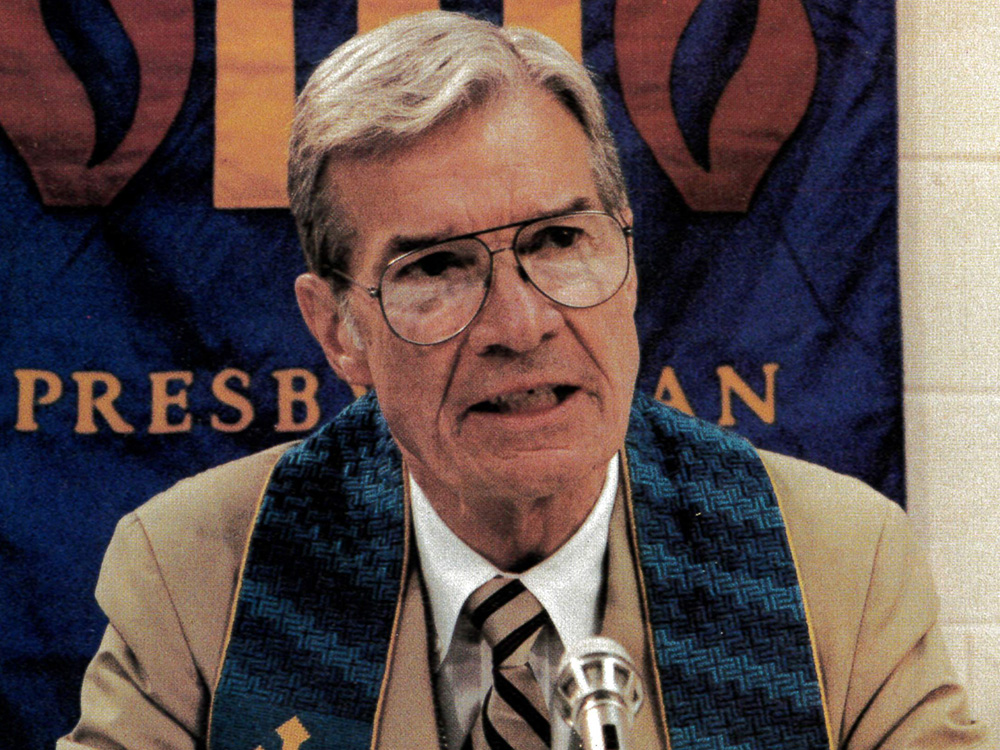 The Presbyterian Church (U.S.A.) is mourning the loss of Price Henderson Gwynn. The North Carolina businessman, who served as Moderator of the 202nd General Assembly of the PC(USA), died last week at his home in Charlotte, North Carolina. He was two months shy of his 100th birthday.

The lifelong Presbyterian had a rich history with the denomination, but never felt the call to be a pastor and was once quoted saying, “With a father, grandfather, a brother-in-law, and uncle who were Presbyterian preachers, I had to consider the ministry, but I was called to the world of business. That is where I belong.”

Upon his retirement from the business world, Gwynn devoted himself to work within his home church and the national office. He was asked to place his name in nomination for moderator at the 202nd assembly and said he was initially hesitant since he was not theologically trained but was convinced to take part.

“One of the problems with a layperson out of the business realm is that you’re immediately inundated with a schedule that is horrendous to look at. And you’ve got to preach at this major church, which you’ve never done before. You’ve got to speak at the commencement. You get to speak at a new building dedication. You’ve got to talk to high school students and college students,” he said in a 1998 interview. “A layperson simply doesn’t have a barrel of award-winning sermons back in the closet that you can dip into. They’re all original.”

Gwynn said he asked OGA to cut the schedule in half for the first eight weeks so he could build an inventory of remarks.

“I just can’t go out of here like a shot out of the cannon and start right now. Because it hadn’t been my bag. Never done that before. So, they reluctantly agreed and we pared the schedule down so I could spend some time studying,” he said. “I finally had something like 30 to choose from.”

Gwynn said his message to the church during his time as moderator was similar to Marj Carpenter’s.

“She emphasized the mission aspect, but I emphasized that it’s good to be a Presbyterian,” he said. “I’m proud to be in that fellowship and delighted to be able to extend it to other people and happy about doing it and do so with no apologies.”

He was preceded in death by his wife of 68 years, Katherine Gilman Loy, and is survived by three sons, five grandchildren, and three great grandchildren.

A memorial service will be held at his church, Steele Creek Presbyterian Church at Pleasant Hill in Charlotte at 3 p.m. Eastern Time on Saturday, Oct. 8.  The service will be livestreamed at the church's Facebook page and YouTube channel.