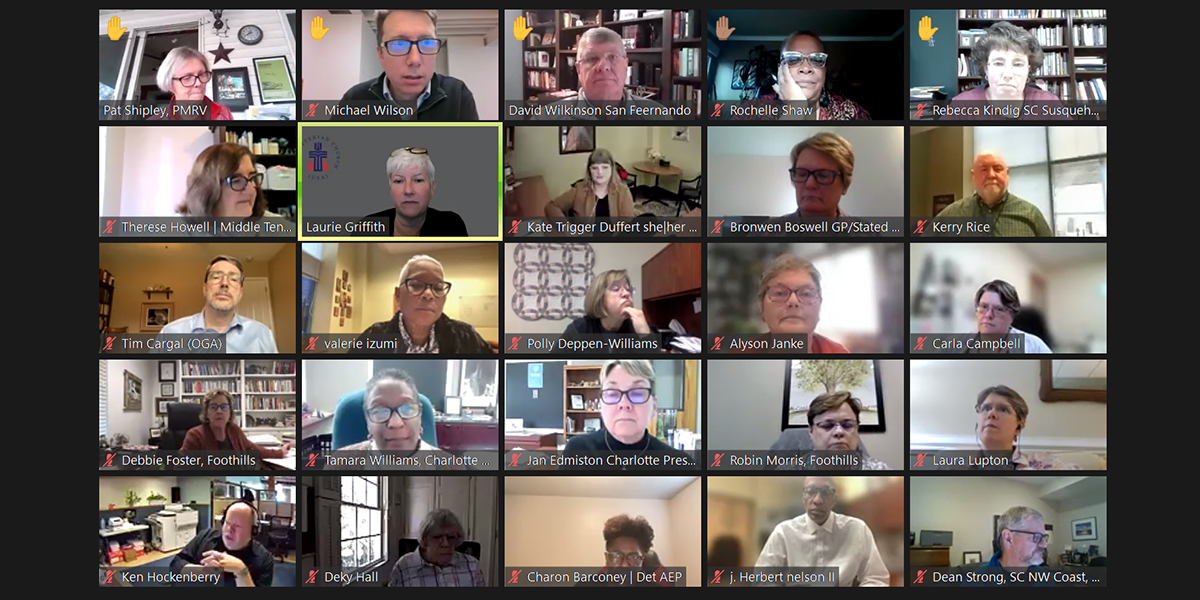 Some attendees at the mid council leaders discussion, November 2, 2022.

Mid council executives and stated clerks joined staff from the Office of the General Assembly (OGA) Wednesday to discuss actions of the 225th General Assembly (2022) of particular interest to synods and presbyteries.

From 1 to 2:30 p.m. (Eastern) the Zoom gathering looked at proposed amendments to the Book of Order that presbyteries need to vote to approve or disapprove before July 9, 2023, as well as the process for submitting votes via an amendments portal.

From 3:30 to 5 p.m. small groups reviewed additional actions by the summer’s General Assembly with implications for mid councils, including business about antisemitism and Islamophobia, gun violence, the sin of slavery, reproductive justice, family leave and sanctuary and accompaniment for migrants.

Laurie Griffith, Associate Director for Constitutional Interpretation, highlighted amendments of note. All 33 proposed amendments from GA225 can be found in a pamphlet that had previously been provided to attendees. 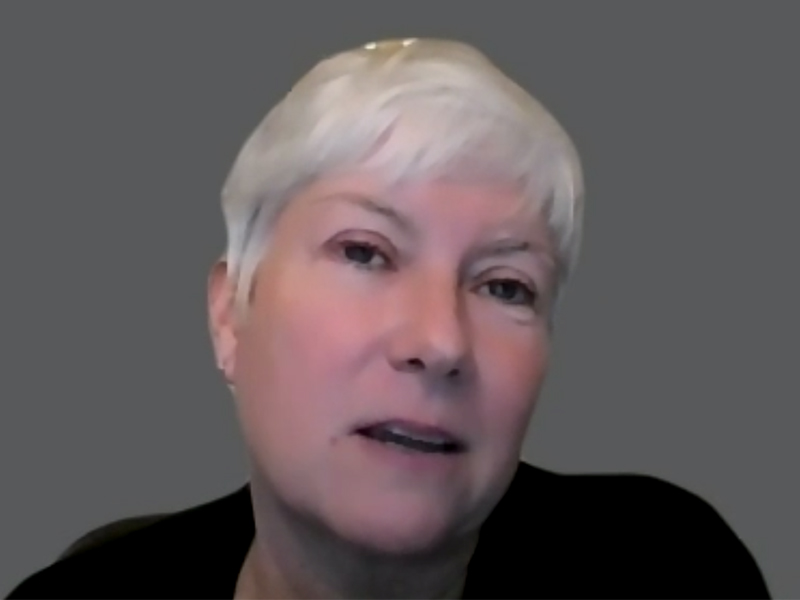 Highlighted amendments include language about holding electronic meetings, “honorary” designation for retired ministers, and family medical leave. Regarding leave, Griffith said she had heard from some mid council leaders that they would be working on adjusting their policies regardless of the amendment votes.

Other proposed amendments Griffith discussed include language broadening responsibilities for commissioned ruling elders and adjusting policies about terms of employment and severance for church workers.

Throughout her talk, mid council leaders could be seen in their Zoom boxes making notes. After Kate Trigger-Duffert, Manager for GA Business and Per Capita Promotion, discussed how votes will be transmitted via the amendments portal, the leaders talked among themselves in small groups.

Trigger-Duffert had explained that stated clerks will handle votes at presbyteries. Sharing her screen, she showed the amendments portal and where to record votes or find out the history of each amendment. Results do not have to be submitted at once by presbyteries, Trigger-Duffert said. She will share running vote totals with mid council leaders as votes arrive. 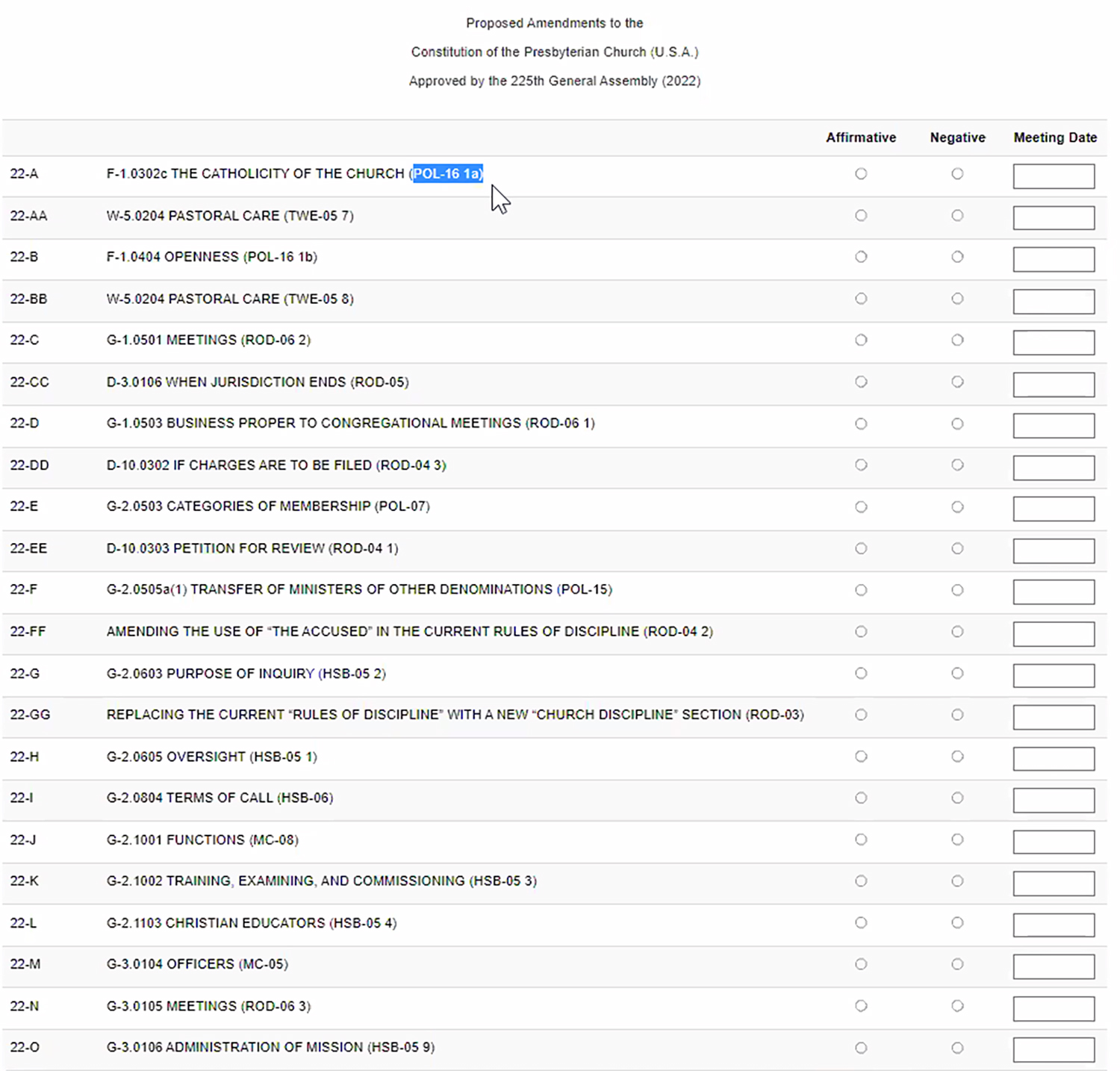 After the small groups, attendees asked questions about resources created or shaped to better understand and classify the proposed amendments. Several leaders agreed to share their own resources via platforms managed by groups such as the Association of Stated Clerks and Association of Mid Council Leaders.

“As many resources as we can share is great,” Griffith said before asking her own question: How are mid council executives planning to conduct votes at their presbyteries?

Answers included using omnibus motions and consent agendas to group less contentious votes (such as votes on electronic meeting amendments), preparing a ballot for voters at presbytery meetings, spreading votes across two meetings (with items requiring debate to be split between meetings) and saving items requiting debate for an in-person meeting rather than a Zoom format.

Rice thanked the leaders for sharing their plans and resources and invited the Stated Clerk of the General Assembly, the Rev. Dr. J. Herbert Nelson, II, to address the group.

“We are thankful for your work and the way by which you have continued to stay steadfast and faithful to our denomination and our faith together in Jesus Christ,” Nelson said.

“We are having to recalibrate church. What does it mean to be a Christian? To work in new spaces in the communities in which we are living?”

Votes on proposed amendments to the Book of Order can be understood as a continuation of the changes that the pandemic instigated or accelerated.

After listing some other ongoing challenges facing the church, Nelson called now “the best of times” in the ways congregations and mid councils are responding to challenges and embracing opportunities.

“You all have been on the front line of meeting these challenges, and I want to thank you for that. It is the road ahead that will remind us of God’s glory.”