Home News A way of life

A way of life

Have a recent story of ecumenical or interreligious cooperation to share with GACEIR? Please email me.
— Dr. Dianna Wright, GACIER staff member 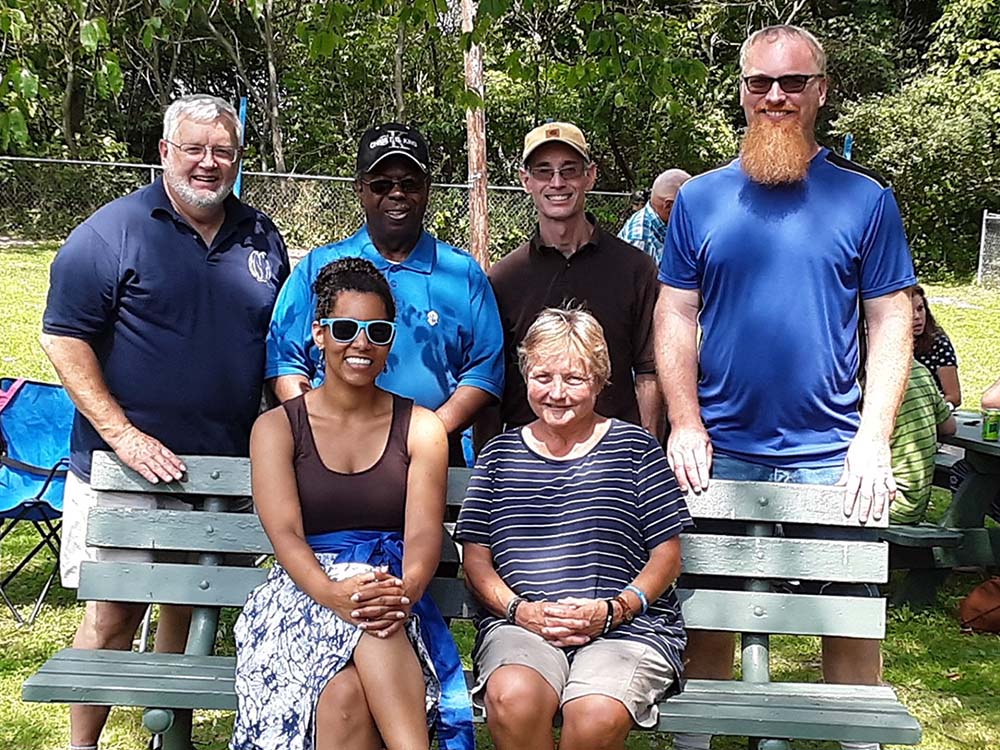 Spencer is a small town in upstate New York with a quaint village center. That’s where anyone driving Highway 34 will find Christ the King Fellowship Presbyterian Church a short distance from other historic church buildings with various denominational affiliations.

Explaining the intimate scale of life in Spencer, the Rev. Sabrina Slater, pastor at Christ the King, joked, “Put it this way. We don’t have a stop light, but we do have a flashing red light at a four-way stop.”

A native of Spokane, Washington, Slater grew up a continent away. Previous experiences in ministry listed on Christ the King’s website took her around the world, including a 30-day Ignatian silent retreat, a pilgrimage along the Camino de Santiago in Northern Spain and a foot-washing ceremony in Fiji. Slater is a graduate of the Bossey Ecumenical Institute, “where she had the opportunity to represent the Presbyterian Church (U.S.A.) internationally, living and studying in Switzerland with Christians from 20 different countries.” She also served as a 2017 World Communion of Reformed Churches Council Delegate.

Slater brings those experiences, and her work on the General Assembly Committee on Ecumenical and Interreligious Relations (GACEIR) and 2020 Vision Team, to Spencer, where she began as Christ the King’s pastor in summer 2017. Presbyterians have been worshiping in the area since at least the 1830s.

“I didn’t know Spencer before I applied for the job,” Slater said. “When interviewing and discerning where God was calling me, I spoke about my belief that church is not just the local congregation but the national and international church.”

The congregation wanted a pastor who would be engaged with the community. “Already in place at the church was a commitment to the faith community in Spencer,” Slater said.

“Being connectional” is a byword inside the PC(USA). In Spencer, “Ecumenical connections are a way of life, even if we don’t use that word (ecumenical) to describe it,” Slater said.

She listed some of the services Spencer churches support, including a high school baccalaureate program, Spencer Picnic, and village-wide worship services such as the National Day of Prayer, Thanksgiving and Lent and Easter services that rotate among congregations. Each year Spencer churches invite guest preachers from different denominations to lead worship.

Other ecumenical collaborations include a Men’s Bible study with members from eight churches. Slater still has the postcard the group sent her in 2017 welcoming her to the community. 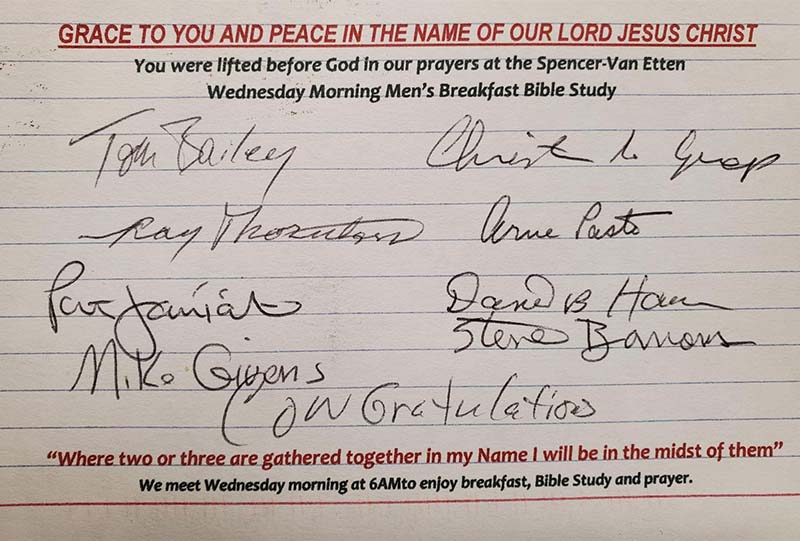 Ecumenism in Spencer has become trickier because of COVID-19, but many of the programs in place before 2020 have continued and some have flourished. A food cupboard assisted by the town’s churches is growing to meet the increasing reality of food insecurity; in the first year of the pandemic 50 volunteers logged more than 3,600 hours of their personal time. Slater said the food cupboard “came into existence 40 years ago through prayer, with churches working together and seeing the need in the community.”

The faith community maintains an emergency fund for heat assistance that Christ the King manages, helping with a major concern during Spencer’s long winters. Christ The King’s membership includes “an amazing organist” who Slater said also plays at St. Luke’s, a church one town over. During a recent National Prayer Day, a librarian member of the church printed and posted prayers by Spencer’s pastors around Nichols Pond in the village center.

One of Christ the King’s members is on the board of INSPIRE, a secular community group that will co-host a blood drive on Good Friday this year.

Another community resource Slater mentioned is Mental Health Heroes, “a mostly school-based program that multiple members of the faith community have been a part of from the beginning.”

Helping community members beyond Sunday morning is increasingly important for churches around the country, and tracks with congregations’ eagerness to serve non-Christians. A 2021 Pew Research Center survey found that the “religiously unaffiliated” share of the public is 6 percentage points higher than it was five years ago and 10 points higher than in 2011. “Recent declines within Christianity are concentrated among Protestants,” the survey showed. 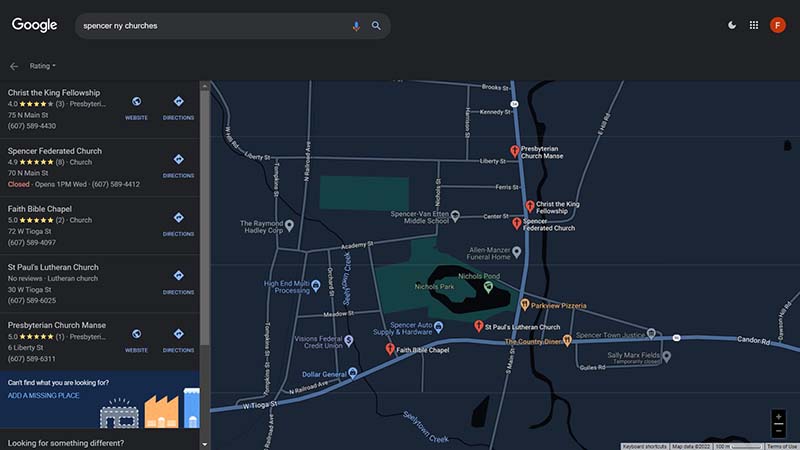 The number of churches in places like Spencer is impacted by the decline in church-going. Slater estimated that the area has 10 congregations in 2022, adding that the number has been fluctuating due to churches closing or combining. Several church buildings now have federated denominational affiliations. Slater is one of Spencer’s few full-time pastors.

“Folks might move between churches for whatever reason after 10 or 12 years,” Slater said.

Wherever a person’s pew, “We are a community that tries to take care of each other. Christ the King has 38 members. But our prayer chain reaches about 60 folks, and a weekly email goes out to 150 people, and not everyone actually gets email.”

Slater said the different faith traditions in Spencer work together like a family reunion. Like any family, there can be issues.

“My first fall we planned Thanksgiving worship and needed to negotiate the challenge of different traditions regarding women’s ordination, which ended up in us needing to move what church would host the service.”

“I know I can’t preach at some of the churches in town,” Slater said. “But we still manage to work together. And the hospitality extended in ways that can be supported are a great gift.”

Although there isn’t much interreligious programming in Spencer — the nearest mosques and synagogues are 17 miles away in Ithaca— Slater has been reaching out to faithful non-Christians.

“Partly because of GACIER I reached out to the Jewish community in Ithaca following a recent instance of terror toward a synagogue ... I said, ‘People in Spencer are praying for you,’ and heard back their thanks.”

When asked what she hopes for the future of ecumenical and interreligious cooperation in Spencer and other small towns around the country, Slater said, “I would hope some of the programs that were lost because of COVID are added back, and that we were able to add even more people into the partnership of community, including more clergy.

“But I don’t want us to add or to go back because it’s comfortable. I pray we’re open to how the Holy Spirit is inviting us to see and to show up loving in ways that join in God’s healing of the world.”