Reproductive justice and the PC(USA)

This article contains content that may be distressing to readers including accounts of abortion and violence.

Under the specter of safe and legal abortion ending in much of the country, let's look at the struggle for reproductive justice inside the PC(USA). 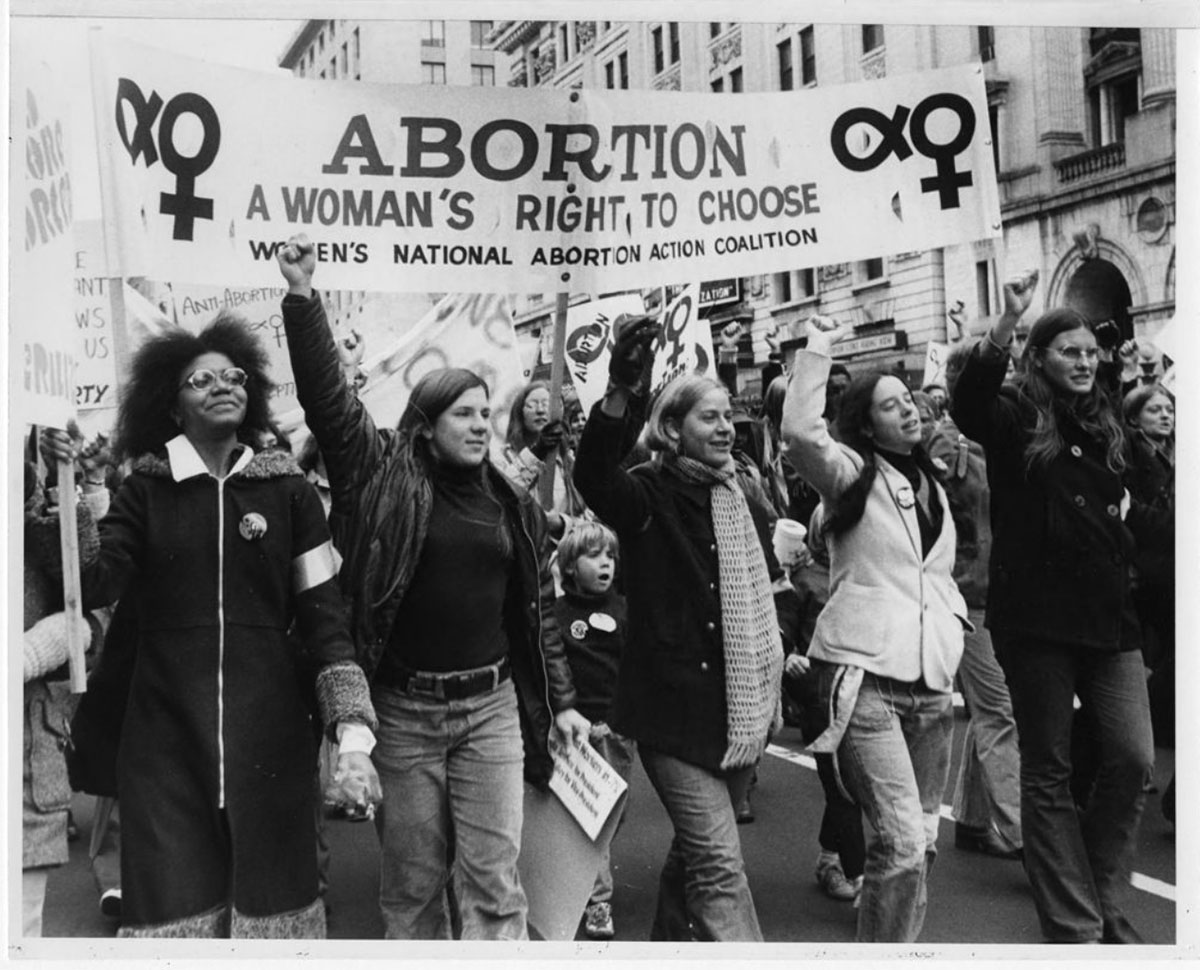 Marchers in a pro-abortion rally, November 22, 1971. From Religious News Service photographs, in Pearl.

Currently the PC(USA)'s office of Mission Responsibility Through Investment supports reproductive justice through shareholder activism, and the church’s Social Justice and Peacemaking Unit works with the interdenominational Religious Coalition for Reproductive Choice.

In 2019, responding to Alabama's passage of anti-abortion legislation, the Stated Clerk of the General Assembly of the PC(USA) issued a statement outlining the denomination's position. The now-Advocacy Committee on Women's Concerns brought an overture on reproductive justice to the 224th General Assembly (2020) that was postponed because of the shortened online business docket and will be taken up at the hybrid 225th General Assembly this summer. A report from the Disparities Experienced by Black Women and Girls Task Force also addresses reproductive justice.

The earliest appearance of abortion as an issue before the General Assembly occurs in 1869, at the Presbyterian Church in the U.S.A. (Old School) Assembly in New York. Responding to Overture 44, on “unscriptural views of marriage, divorce, and infanticide,” the commissioners wrote, “This Assembly regards the destruction by parents of their own offspring, before birth, with abhorrence, as a crime against God and against nature.”

A century later the 1962 UPCUSA General Assembly adopted the report of its Committee on Responsible Marriage and Parenthood holding that abortion could not be “an individual decision on the part of the physician and couple. Their decision should be limited and restrained by the larger society.”

In 1966 the UPCUSA organized the Task Force to Study Sexuality and the Human Community, which reported to the 1970 Assembly, reversing the 1962 position: “Abortion should be taken out of the realm of the law altogether and be made a matter of the careful ethical decision of a woman, her physician and her pastor or other counselor.” The influence of the Confession of 1967 is evident here. Though it extensively decried “sexual anarchy,” the confession sought to frame sexual relationships and matters of home and family in terms of compassion rather than discipline: “The church comes under the judgment of God and invites rejection by society when it fails to lead men and women into the full meaning of life together or withholds the compassion of Christ from those caught in the moral confusion of our time.”

The 1970 Assembly adopted the Task Force's report, adding that abortion was “a matter of the careful ethical decision of the patient.” This position was strengthened by the 1972 Assembly, which declared: “Women should have full freedom of personal choice concerning the completion or termination of their pregnancies and that the artificial or induced termination of pregnancy, therefore, should not be restricted by law, except that it be performed under the direction and control of a properly licensed physician.”

The PC(USA)’s present support of reproductive justice was informed during this era of General Assemblies by conversion experiences like those of the Rev. Peggy Howland and the Rev. Robert Lee Maffett — individuals who sought guidance in their own periods of moral conflict and were given it by the young women around them.

Howland, the 12th ordained woman in the UPCUSA, served on the board of Planned Parenthood of Passaic County, New Jersey in the early 1960s. In her telling, Planned Parenthood field workers changed women’s lives: “Poor women with several small children would shed tears when they learned there was a way to stop having babies every year.” Despite this background, Howland was opposed to abortion, until in 1965 a teacher of hers at Union Theological Seminary asked whether it was fair for young women to serve as “baby factories” for adoption services. Howland changed her mind.

In 1968 she helped found the Albany-area Clergy Consultation Service (CCS), a group of Protestant and Jewish religious leaders who conducted “all-options counseling”— setting some women up with adoption services, finding legal abortion providers for others and safe but illegal abortions for others. Albany CCS was careful to remain an information provider; women had to contact doctors themselves. “It was a humbling thing to have women follow our instructions and arrange to meet a stranger on a street corner near a certain motel in a distant city, trusting us that they would be safe with a real OB-GYN trained doctor who was taking this risk to help them.” 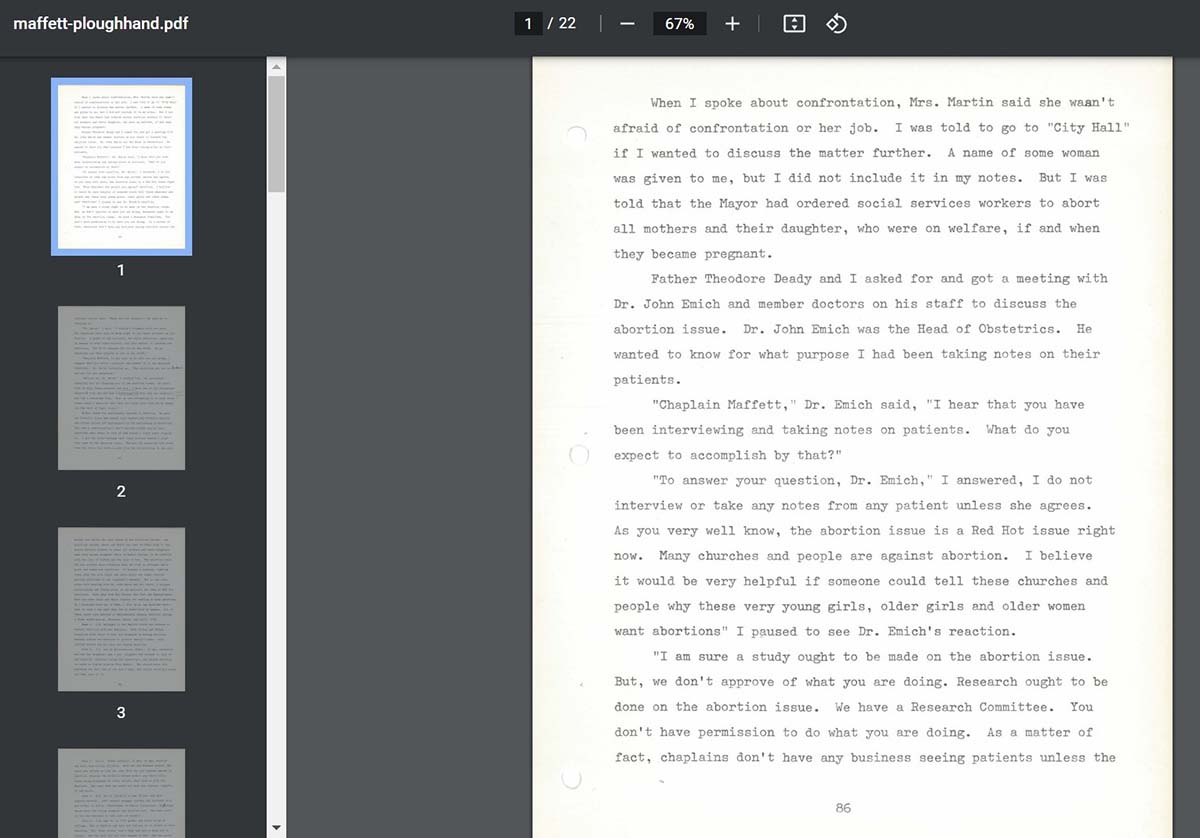 Some of the OB-GYNs Howland referred women to were in England, some in Japan and others in Philadelphia.The Rev. Robert Lee Maffett, the Presbyterian chaplain of Philadelphia General Hospital (PGH) in 1968, grew up opposed to abortion. As chaplain of the last centralized public health facility in the city, his thoughts conflicted. He saw how poor, Black and Latina women in particular suffered from the lack of safe, legal abortion. He also heard that the administration of Mayor Frank Rizzo had ordered OB-GYNs working for the city to perform compulsory abortions on any and all women on welfare.

In his memoir, “The Ploughhand,” Maffett describes his conversion experience. Seeking guidance from God on the permissibility of abortion, he had a dream: a teenager from his church is admitted to PGH, hemorrhaging from a self-induced abortion. Maffett bolted out of bed and drove to work to find that his dream was true. The teen survived, after massive blood transfusions. When she was strong enough to talk to Chaplain Maffett, she said: “Before I have a baby, I would rather have died. I am not ashamed and I don't feel sorry for what I did. I trust you and my mother. But, I did not want you or my mother or anybody to know I was pregnant. I didn't want anybody, my parents, or anybody to suffer for anything I did. So I made up my mind to abort myself, even if it killed me.”

The PCUS held common cause with the UPCUSA on abortion through the 1960s and 1970s. In 1978 the church called on elected officials to codify and support the U.S. Supreme Court ruling in Roe v. Wade, asking ”the President, the Congress and State Legislators to guarantee equal access to abortion rights as stated in the 1973 Supreme Court decision, by ensuring public funding for those who are unable to pay.” A reunited PC(USA) in 1983 once more affirmed Roe and the cause of reproductive justice.

Reagan-era opposition to abortion rights would first get picked up by the General Assembly in 1986. Reporting to the Assembly Committee on Justice and the Rights of Persons, the standing Council on Women and the Church and the Committee on Women’s Concerns wrote, “Acts of terrorism are being committed against abortion clinics and counseling centers. Harassment, both verbal and physical, plagues women seeking abortions and even follows them home. Certain religious groups, well-organized and well-funded, are increasing their efforts to overturn the 1973 Roe v. Wade decision of the Supreme Court, and to legislate a ban not only on abortion but on contraceptives as well.” The Assembly adopted the committee's report, which reaffirmed reproductive choice, deplored harassment of women seeking abortions, protested the ongoing terror campaigns against abortion clinics and urged congregations to start volunteer networks to escort women to abortion clinics. 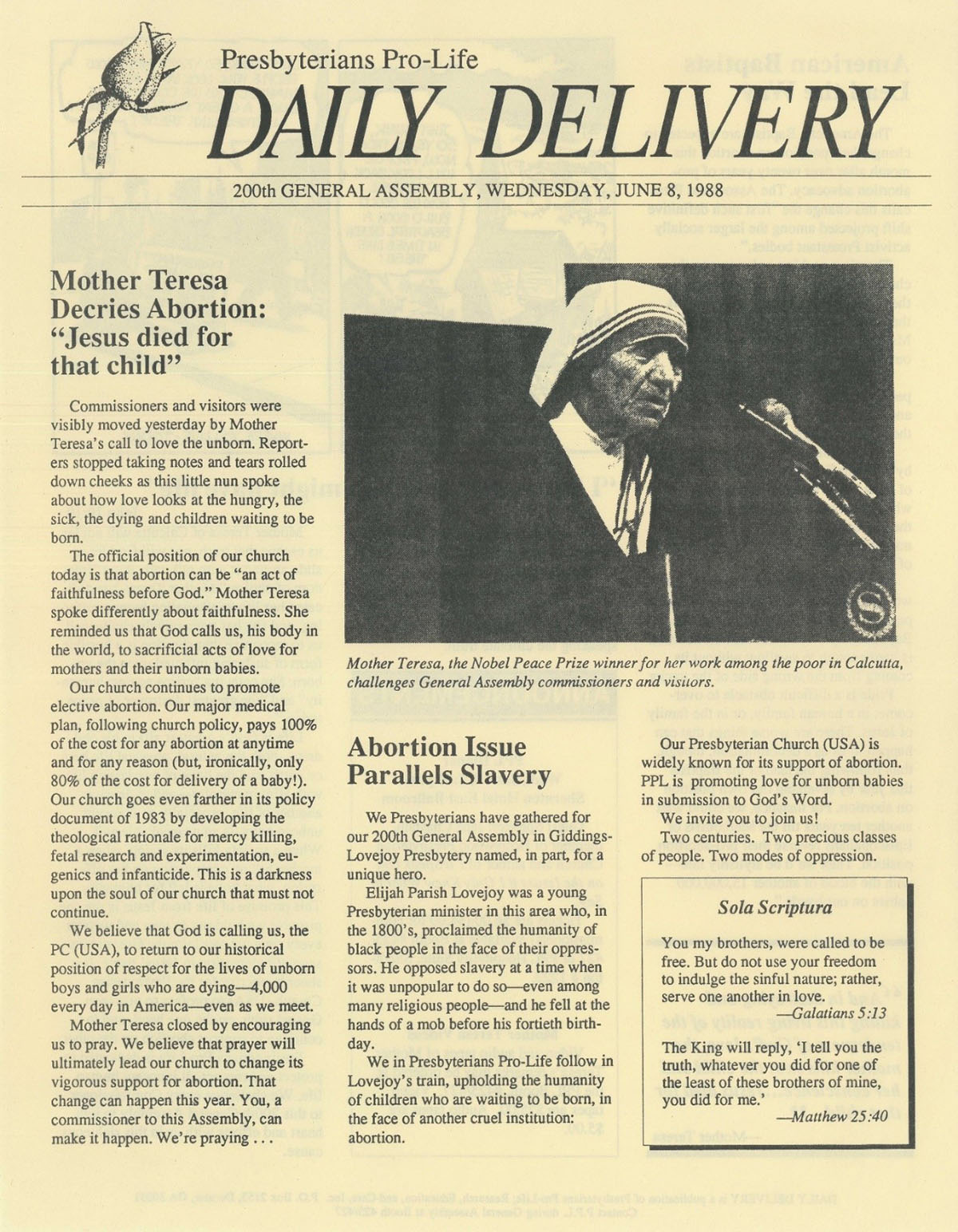 While Christian terrorist groups like the Army of God intensified operations against doctors and clinics, grassroots coalitions of Presbyterians against reproductive choice began to convene. Presbyterians Pro-Life began organizing in 1984, and had its first exhibit booth at the 1985 General Assembly. At the 1988 Assembly their annual dinner featured the Presbyterian sportscaster and right-wing celebrity Jane Chastain. Their biggest success that year was bringing Mother Teresa of Kolkata to address a gathering of Presbyterians at the St. Louis Sheraton.

In the 1990s, amid a systematic campaign of anti-abortion terror that would ultimately include the murders of 11 abortion workers, the bombing of the 1996 Olympics in Atlanta and more than 7,000 acts of violence including arson, bomb threats, bioweapon threats and assault, Presbyterians modified the expansive support of reproductive justice enacted by prior assemblies. The 1992 General Assembly approved the report of the Special Committee on Problem Pregnancies and Abortion, which included an affirmation “that abortion should not be used as a method of birth control.”

The affirmation echoed language used by opponents of abortion, who frequently argued that because other methods of contraception exist, all abortions are elective and casual. In one pamphlet, the Rev. Zolton J. Phillips of Tallahassee wrote, “It is my conviction that abortion is the evil work of a society devoted to hedonism and self-worship. It is a selfish act brought about by adulterous actions of a perverse generation as they seek to satisfy themselves and ignore the rule of God that sex belongs only within the bonds of marriage.”

The 1992 Assembly also took action to enable the Board of Pensions to change its dues structure to permit “relief of conscience” of ministers who opposed paying into any medical insurance plan that covered abortion. This action also sought to answer an anti-abortion talking point — that the Church's medical coverage paid, as one Presbyterians Pro-Life newsletter put it, “100% of the cost for any abortion at any time, but only 80% of the cost for delivery of a baby.” The Relief of Conscience rolls are maintained to this day. 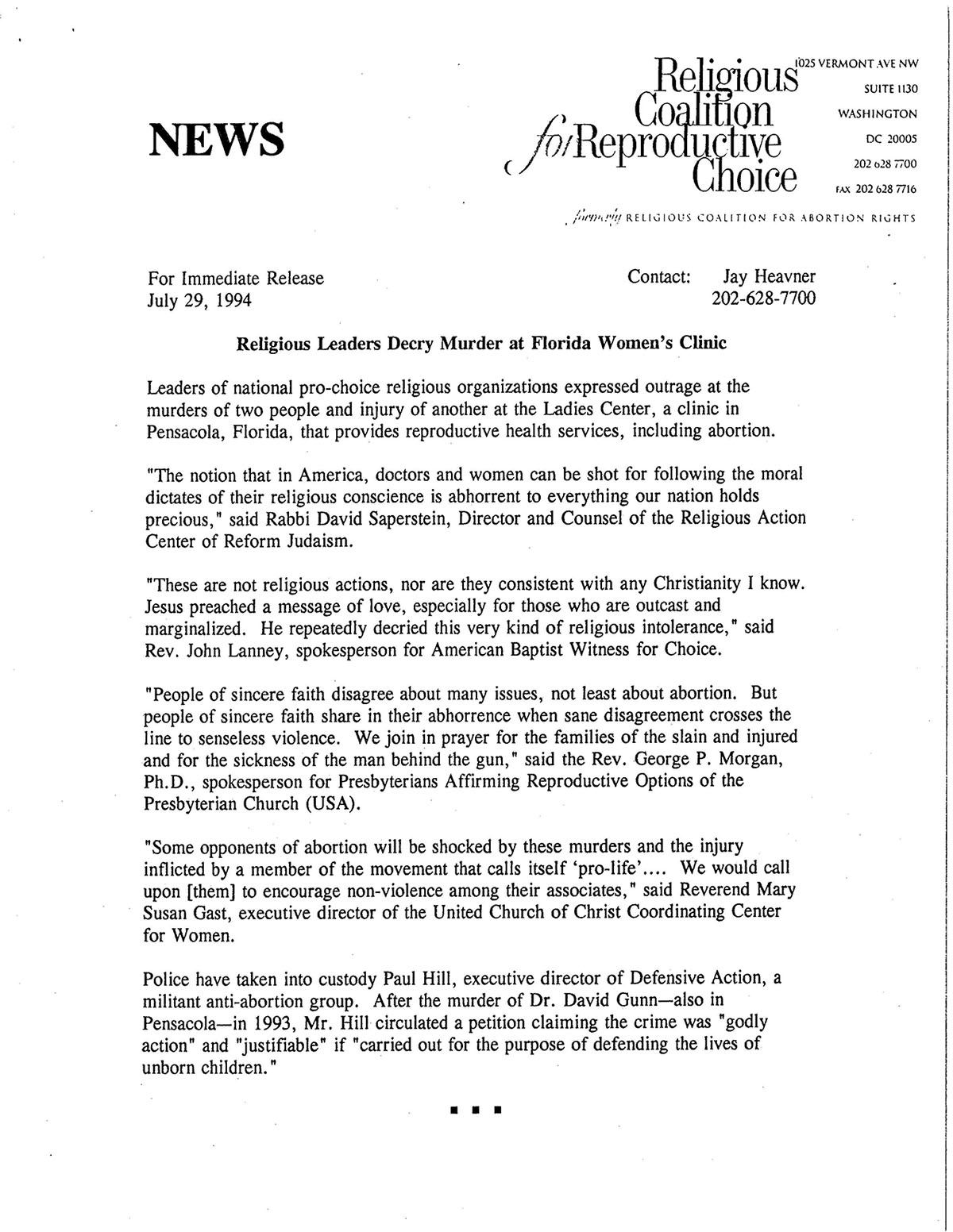 At the same time the PC(USA)'s Social Justice and Peacemaking Unit (SPJU) worked to support the Religious Coalition for Reproductive Choice (RCRC). In 1994, SJPU issued grants to RCRC in response to the murder of Dr. John Britton and James Barrett.

— This article was adapted from a Presbyterian Historical Society blog post: https://www.history.pcusa.org/blog/2022/05/reproductive-justice-and-pcusa