A look back at previous GA milestones 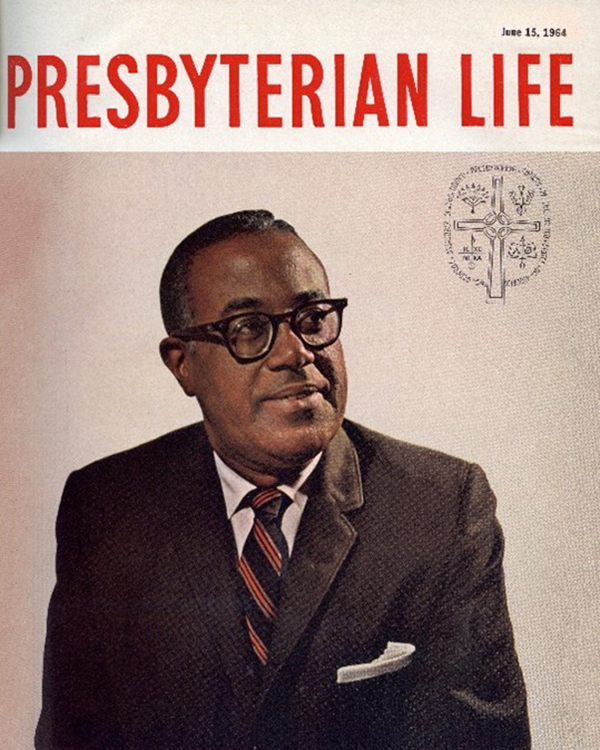 On Saturday night, commissioners will elect a pair of Co-Moderators to represent the 225th General Assembly through June 2024. This year’s Assembly will be a historic first for the denomination — a hybrid meeting taking place virtually and in person in Louisville. The Presbyterian Historical Society welcomes the newly elected Moderators and reflects on the historic elections of past Moderators.

As the denomination faced unprecedented challenges in recent years from the Covid pandemic and social unrest in response to racial and economic discrimination, the 2020 General Assembly responded by electing Co-Moderators who echoed the calls for justice. Ruling Elder Elona Street-Stewart and the Rev. Gregory Bentley were elected during a historic first — a completely virtual General Assembly. When elected, Street-Stewart — the first Native American elected Moderator of the PC(USA) — reflected on the denomination at that moment in time, “The world needs a church that has no fear over its diversity.”

Well before Street-Stewart’s historic election in 2020, the United Presbyterian Church in the U.S.A. shared her sentiment when it elected the Rev. Edler Garnet Hawkins to serve as Moderator of the 1964 General Assembly. Hawkins — the first African American elected to the position — became Moderator during a contentious Assembly. That same year, Stated Clerk Eugene Carson Blake — an outspoken advocate for the rights of African Americans — was called on by the Assembly to “cease and desist” from all activities “that would bring disrepute [on] or lower the dignity [of]” the church. Hawkins helped organize and minister to St. Augustine Presbyterian Church in the Bronx, New York, and, at the time, was a member of the Commission on Religion and Race. A 1964 issue of Presbyterian Life reflected on Hawkins’ election: “Never before, however, has someone been called upon to symbolize a major denomination’s unequivocal stand for civil rights.” A decade after Hawkins was named Moderator of the UPCUSA, Lawrence Wendell Bottoms would be elected the first African American Moderator of the Presbyterian Church in the United States at the 1974 General Assembly in Louisville.

Women first became eligible to serve as Moderators in 1930, when the PC(USA) General Assembly opened the position of ruling elder to them. Four decades later, Elder Lois Stair became the first woman elected Moderator of the UPCUSA in 1971. Prior to 1971, Stair was ordained a ruling elder at the First Presbyterian Church in Waukesha, Wisconsin, in 1957, and went on to serve as a GA commissioner and as a Moderator of Milwaukee Presbytery and the Synod of Wisconsin.

Five years after Stair’s election, Dr. Thelma Davidson Adair became the first African American woman Moderator of the General Assembly of the UPCUSA. Raised in Iron Station, North Carolina, Adair was educated first at Barber-Scotia Junior College, then Bennett College. After she married Presbyterian minister Eugene Adair in 1940, she received a Ph.D. in education and became a professor of Education at Queens College, University of the City of New York. Adair’s education, along with her leadership roles at Mount Morris Presbyterian Church and with Black Presbyterians United, prepared her for the work she would do as Moderator of the UPCUSA. As Moderator from 1976 to 1977, she visited 70 countries and conducted meetings with local and national leaders such as President Gerald Ford. 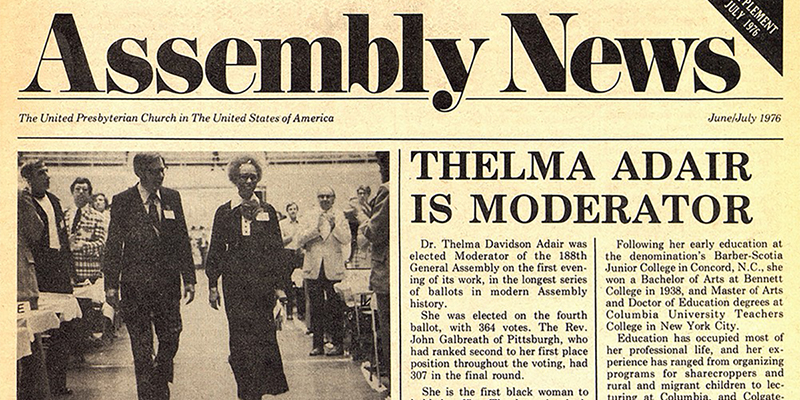 Dr. Thelma Davidson Adair after her election to Moderator of the UPCUSA. Assembly News front page, June/July 1976. From PHS Collections.

In 1978, Sara Bernice Moseley would follow shortly after Adair when she was elected Moderator of the PCUS in 1978. A native of Anson, Texas, Moseley graduated from Texas State College for Women in 1937 and in 1965 became a ruling elder at First Presbyterian Church in Sherman, Texas. Prior to becoming Moderator of the denomination, Moseley served as vice chair of the PCUS’s Division of International Mission, as chair of the General Assembly Mission Board and as chair of the Board of Women’s Work. After Reunion in 1983, Moseley served as the first chair of the General Assembly Council from 1983 to 1984.

The 1979 UPCUSA General Assembly met in Kansas City, Missouri, and elected the Rev. Howard Leland Rice. Rice worked at San Francisco Theological Seminary as a chaplain and professor of ministry from 1968–1997. Prior to joining SFTS, Rice was diagnosed with multiple sclerosis. Confined to a wheelchair, Rice became one of the first Moderators to publicly share his disability in support for the rights of disabled people. 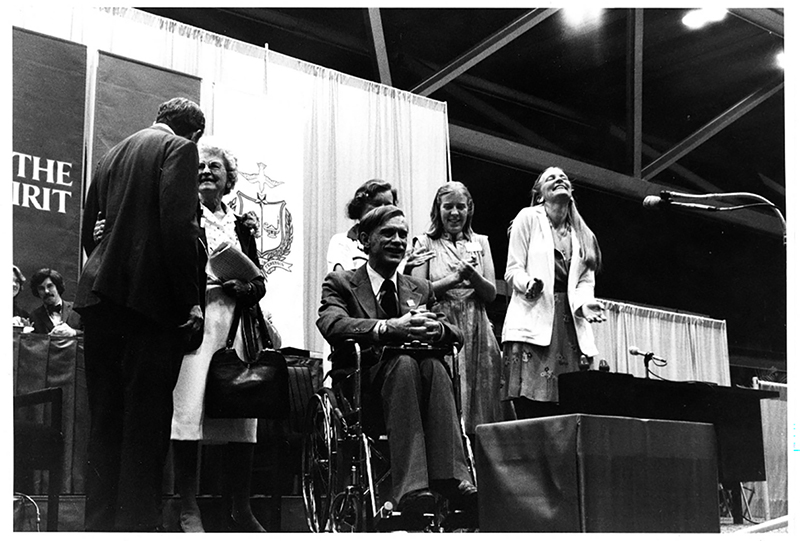 With a renewed spirit of togetherness, the PC(USA) General Assemblies continued to elect moderators who made history, and who represented a more complete picture of the denomination. In 2000, the Assembly elected Rev. Syngman Rhee, the first Korean American moderator; in 2002 they elected Rev. Fahed Abu-Akel, the first Arab American to lead a major U.S. denomination; in 2008 Rev. Bruce Reyes-Chow became the first Chinese-Filipino American Moderator; in 2012 Rev. Dr. Neal Presa was elected was elected the youngest Moderator at the age of 35; in 2016, Rev. Denise Anderson and Rev. Jan Edmiston became the first pair of Co-Moderators; and in 2018 Elder Vilmarie Cintrón-Olivieri became the first Hispanic Co-Moderator of the PC(USA).

As people gather in Louisville and online, the denomination prepares for another historic moderatorial election — the first Co-Moderators elected at a hybrid Assembly.