Home News Listening to the survivors of sexual misconduct

Listening to the survivors of sexual misconduct

Health, Safety and Benefits Committee approves most recommendations from a task force made up of survivors 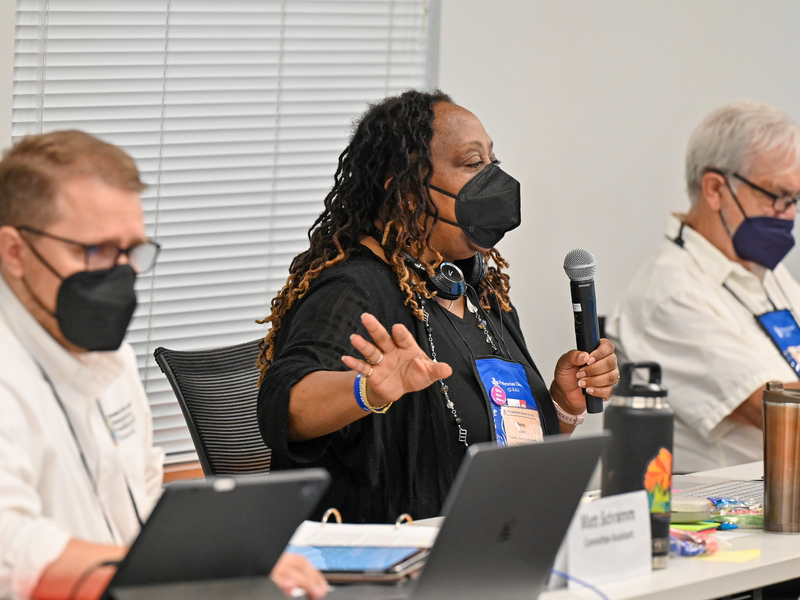 Vice-moderator of the Health, Safety, and Benefits Committee, Doris Evans, leads committee session on June 23, 2022 during the 225th General Assembly in Louisville, Kentucky. (Photo by Rich Copley) your

During its final day of business Saturday, the Health, Safety and Benefits Committee approved most of the recommendations made by the Survivors of Sexual Misconduct Task Force. The recommendations of the task force, moderated by the Rev. Carol Howard Merritt, were contained in HSB-05, which with all the amendments commissioners proposed on Saturday took the committee most of the day to complete.

Both Howard Merritt, a celebrated author and the pastor of Bedford Presbyterian Church in Bedford, New York, and another task force member, the Rev. Dr. Kris Schondelmeyer, who appeared before the committee via Zoom, told their stories of surviving sexual abuse. In the case of Howard Merritt, it was her sister’s story of being molested “over and over again” by a pastor from another denomination.

“When I became a pastor, I almost thought I was betraying her,” Howard Merritt told the committee. “But I promised myself I would fight on behalf of survivors.”

“Meeting with this task force was painful, but it was also extraordinary,” she said. “We had people who understood the balm of art and music and liturgy … Some of us understood our denomination’s polity and how it could bring reconciliation to our denomination.”

Schondelmeyer, pastor of Presbyterian Church of Deep Run in Perkasie, Pennsylvania, is a survivor of clergy sexual abuse dating back to his youth. He now advocates for creating safe and sacred spaces within the Presbyterian Church (U.S.A.). He said the commissioned lay pastor who abused him is now in prison after being convicted of even more dangerous crimes.

Schondelmeyer told the committee at one point he almost walked away from ministry and from belonging to the denomination, “but I can’t. I love God and the PC(USA), and I believe we can do better.”

The committee approved, in most cases with amendment, six of the task force’s eight recommendations.

Those receiving approval were recommendations:

After voting on each of the recommendations found in in HB-05 separately, committee members said unanimously that its other item of business for the day, HSB-09 from the Special Committee to Study the Reformed Perspective on Christian Education, was answered by HB-05.

An additional item of business

Committee members stuck around after their scheduled closing time to reconsider HSB-06, recommendations regarding a family leave policy, which the committee approved Friday. At the request of the Rev. Lindsay Jacaruso of the Presbytery of Minnesota Valleys, commissioners stripped out a requirement that at least eight weeks of paid family medical leave be required in pastors’ terms of call.

The reasoning is based on reports that previous assemblies had turned down similar requirements in the past when a specific number of weeks of paid leave was included. As it now stands, HSB-06 calls for paid family medical leave and participation in the PC(USA)’s benefits plan, including both pension and medical coverage. But no minimum paid family medical leave is mentioned.