Before it was Atlanta, it was Marthasville. Before that, it was Terminus and Standing Peachtree—the end of a railroad and the beginning of a Native American trail. The city that today anchors the ninth-largest metropolitan area in the nation has always been a place where people, goods, and ideas meet and depart. Presbyterian history in the ATL has followed a similarly transitory path. Even before the advent of the New South, the only certainty was change. 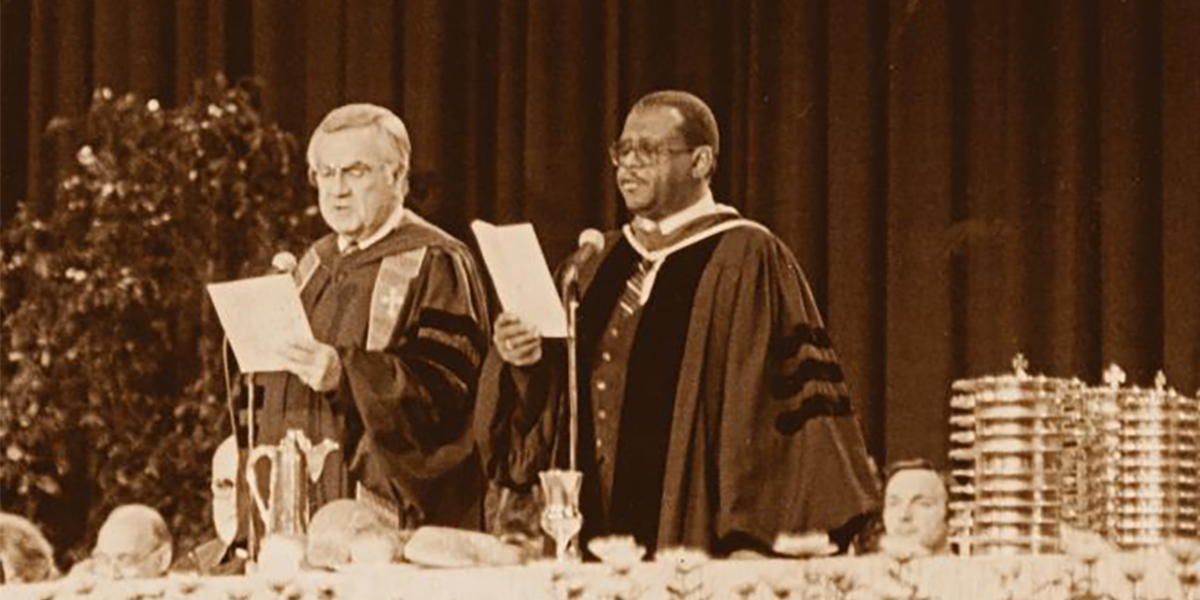 Anderson (left) and Costen (right) read, in unison, the Declaration of Reunion at the communion service on Friday evening, June 10, 1983, formally constituting the Presbyterian Church (U.S.A.).

Moderators John Anderson and James Costen brought the two churches together into one denomination during the Reunion proceedings. The service opened with a 30-minute processional of commissioners and representatives from each presbytery, carrying banners and bringing communion chalices and bread for the service. Other groups of Presbyterians around the country gathered in their local congregations to take communion and celebrate reunion.  In 2013, James Costen’s wife, Melva Costen, sat down with PHS to record an interview recounting her experiences in the Church, including her longstanding involvement with Presbyterian music. 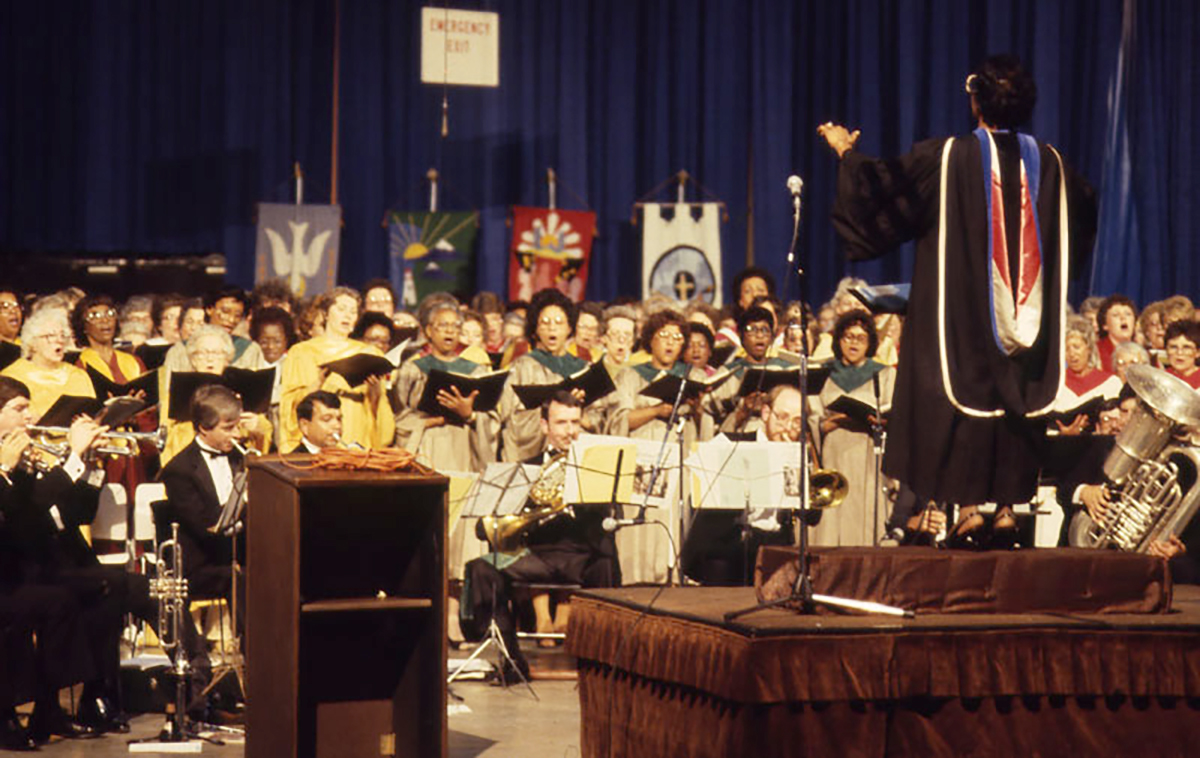 Melva Costen leads a choir at the 1983 General Assembly.

After the PCUS and UPCUSA General Assemblies passed the formal resolutions approving reunion, Presbyterians poured into the streets of Atlanta to celebrate the historic event. Carrying banners, singing, and joining hands, they marched the mile from the World Congress Center to City Hall where Mayor Andrew Young greeted the crowd. 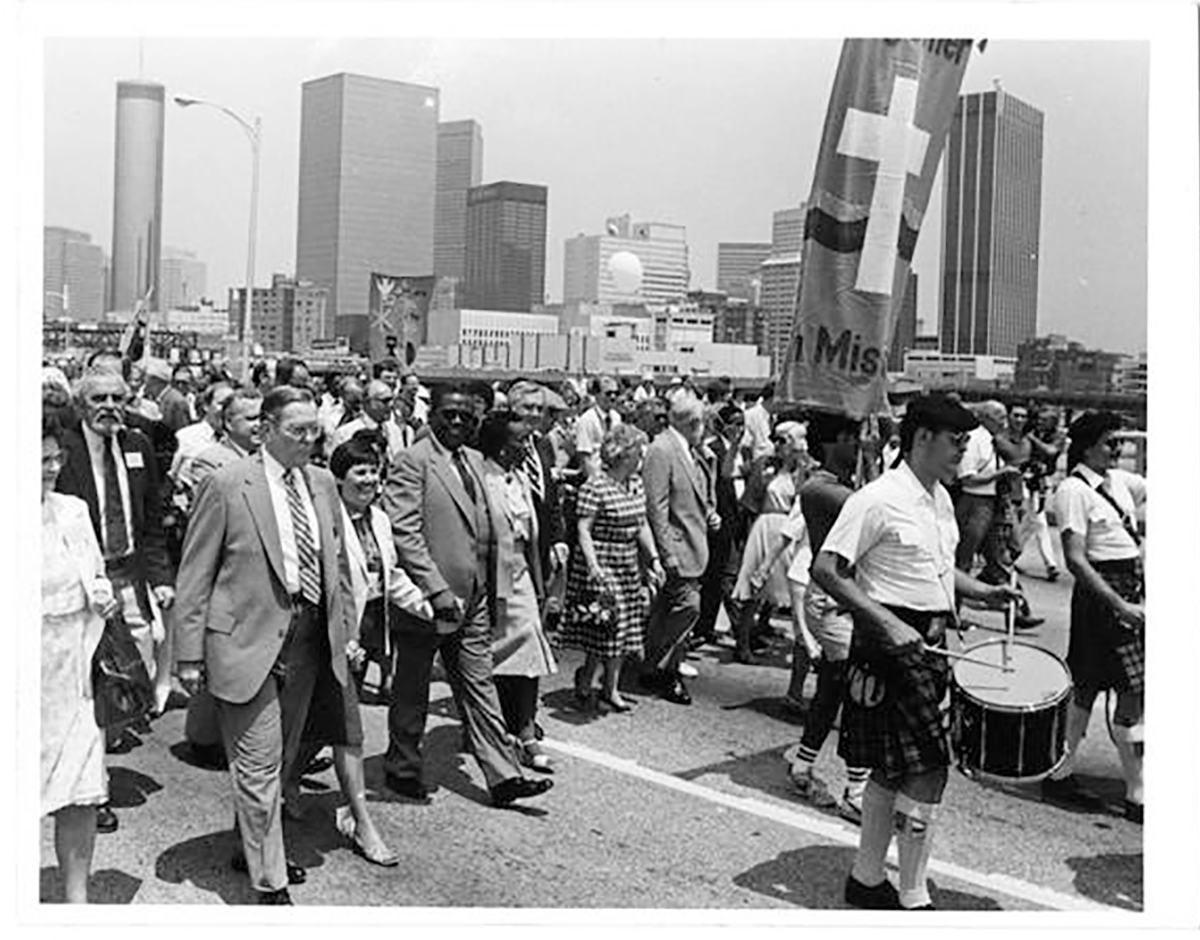 As the congregants flowed into the streets of Atlanta, television news flocked to the event. CBS's national broadcast noted that the end of the schism between north and south was greeted with "apprehension" from some quarters, and that "real reunion will take years." In the video recording of the broadcast, Moderators James Costen (UPCUSA) and John Anderson (PCUS) are seen leading the crowd in song—the tune of choice being "Amazing Grace."

As is the case in any major decision, there were dissenters to the reunion. The CBS broadcast captures a group of counter-demonstrators, who held signs associating the World Council of Churches with the KGB. One man is heard shouting, "Be ye separate! You Southern people are going to be swallowed up by these liberals and these socialists!" 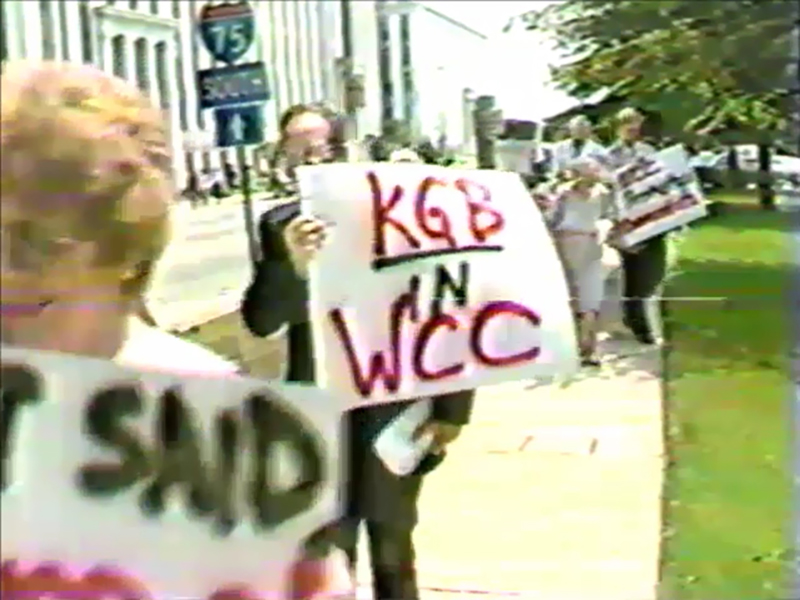 Counter demonstrators against the 1983 reunion likened the World Council of Churches to the KGB. (Courtesy of PHS)

Counter demonstrators against the 1983 reunion likened the World Council of Churches to the KGB. (Courtesy of PHS)

Prior to the union, in a publication titled Highlights and Questions in Studying the Plan for Reunion, members of churches, presbyteries, and synods were encouraged to approach Reunion with the same spirit of compromise that “gave the United States a Congress composed of a Senate and a House of Representatives, so that the concerns of both large and small States could be expressed.” Though not all approached the event with such patience and hope, as is evidenced in the presence of dissenters marching in protest, many supported the reunion and agreed to move forward in unity.