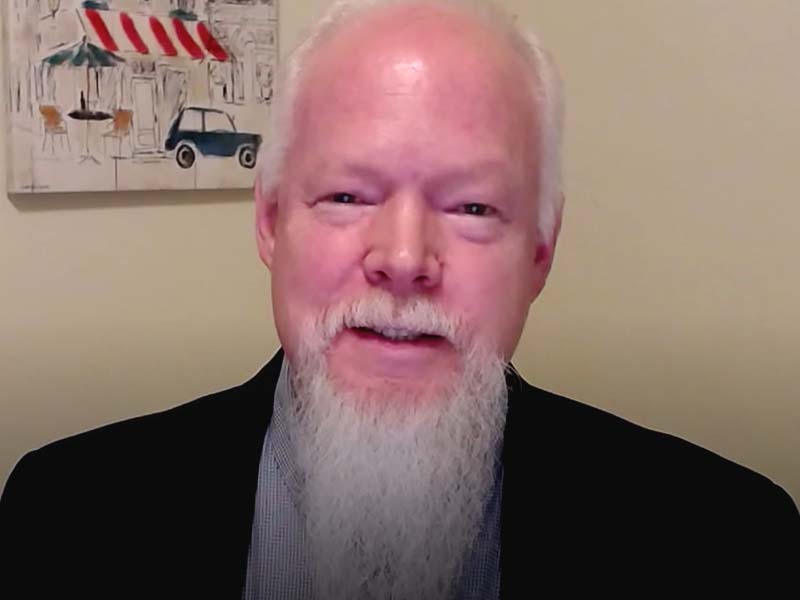 ACC Moderator Forrest Claassen, via an Equip training video about ACC for GA225.

ACC Moderator Forrest Claassen, via an Equip training video about ACC for GA225.

And for good reason. The nine-person permanent committee works hard during a 60-day window to review items of business with possible constitutional implications — including resolutions, reports and overtures that relate “to interpretation and amendment” —and then crafts written advice that Assembly commissioners and other participants can review as text.

All that careful discussion and writing prior to an Assembly, and anything ACC members speak to during each biannual gathering, has a singular goal: helping commissioners and advisory delegates navigate the church’s constitution as they discern and make decisions. The ACC advises the General Assembly; it never instructs.

Laurie Griffith and Forrest Claassen, Associate Director of Constitutional Interpretation in the Office of the General Assembly (OGA) and ACC Moderator respectively, referred anyone looking for specific advice by ACC to the 225th General Assembly tab of PC-Biz.

[To bring up 36 items across 9 committees mentioning ACC advice, type “Advisory Committee on the Constitution advises” into the “Contains” box at the top of the PC-Biz search screen.]

They also gave generously of their time to talk with the news service about everything else ACC-related, including their passion for the committee’s work and ACC’s dedication to Presbyterian polity. Just not, you know, ACC’s specific advice.

ACC focuses on constitutional implications to the Book of Order’s four parts: The Foundations of Presbyterian Polity, Form of Government, Directory for Worship and Rules of Discipline. ACC’s own responsibilities are detailed in the Book of Order.

ACC also comments on items of business before the Assembly with implications for the Book of Confession (the other book in the PC[USA] constitution), such as an overture about a new confession before the Theology, Worship, and Education Committee at GA225.

Griffith said 31 items of business have been commented on by ACC for this Assembly. Their work has included business submitted to GA224 that was referred to this summer’s Assembly because of the truncated 2020 format.

Some of the items are (and this is a small sample) a proposed merger of the Presbyterian Mission Agency and OGA, amending family leave policies, electronic appointment of teaching and ruling elders in extraordinary circumstances, receiving immigrant pastors as presbytery members, and appointing future committees and commissions. 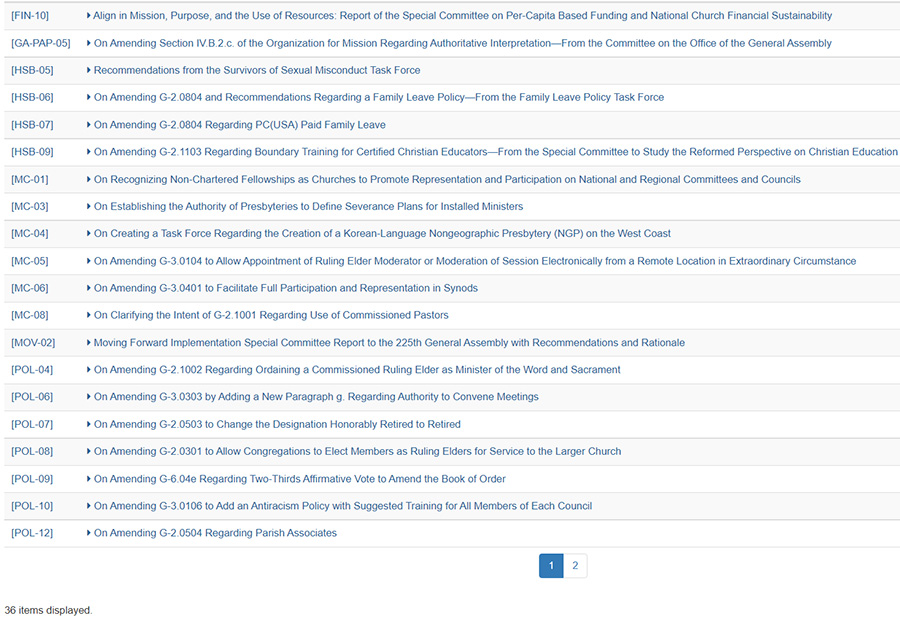 First of two pages showing items of business including ACC advice, via PC-Biz.

When ACC comments on an item, it often advises approval or disapproval, citing constitutional or theological precedent. Sometimes ACC proposes alternate wording that could bring an item into alignment with the church’s current polity. Sometimes ACC points out “issues” with item wording or intention.

ACC’s work this cycle included writing advice for 12 items before the Polity Committee, which Claassen called the default place for business calling for amendment to the Book of Order.

“ACC’s charge is most obvious when the constitution would be changed,” he said. “But that’s not the only type of business ACC reviews.”

Claassen used the example of a congregation changing presbyteries as another item type ACC might review. “That’s a time the Book of Order is not being modified but lived out.”

Griffith, while staying away from the substance of ACC’s advice, said that some of those business items are “designed to make the Rules of Discipline easier to understand and apply.”

As Associate Director of Constitutional Interpretation in the Office of the General Assembly, Griffith has worked with the Book of Order since 2002, including those same Rules of Discipline the Assembly could vote to change this summer.

One thing she loves about her work is how it connects “church processes to church values and people,” she said. “The form of how we order ourselves is so closely linked to our theology of everyone having a voice and everyone having different skills and gifts.” Griffith said members of ACC share that enthusiasm.

“Folks on the committee have worked in the broader PC(USA) in various ways. They are ruling elders and ministers of word and sacrament, including stated clerks and attorneys and professors. They have different skills but all have a passion for our form of government.”

In the build-up to GA224 in 2020 the committee was meeting in Louisville when pandemic shutdowns began. This year it worked online via Zoom, which Griffith described as “more challenging.”

Claassen agreed. “Before the pandemic we would spend 40 or 50 hours over the course of a few days together,” he said. “That built a special comradery, gave us extra energy. When we’re wedging Zoom meetings into busy schedules it’s difficult to do the deep work.

“There were some benefits to meeting online,” he added, including making it easier for ACC members to juggle other volunteer or work commitments. “But overall, virtuality hurt the process.” 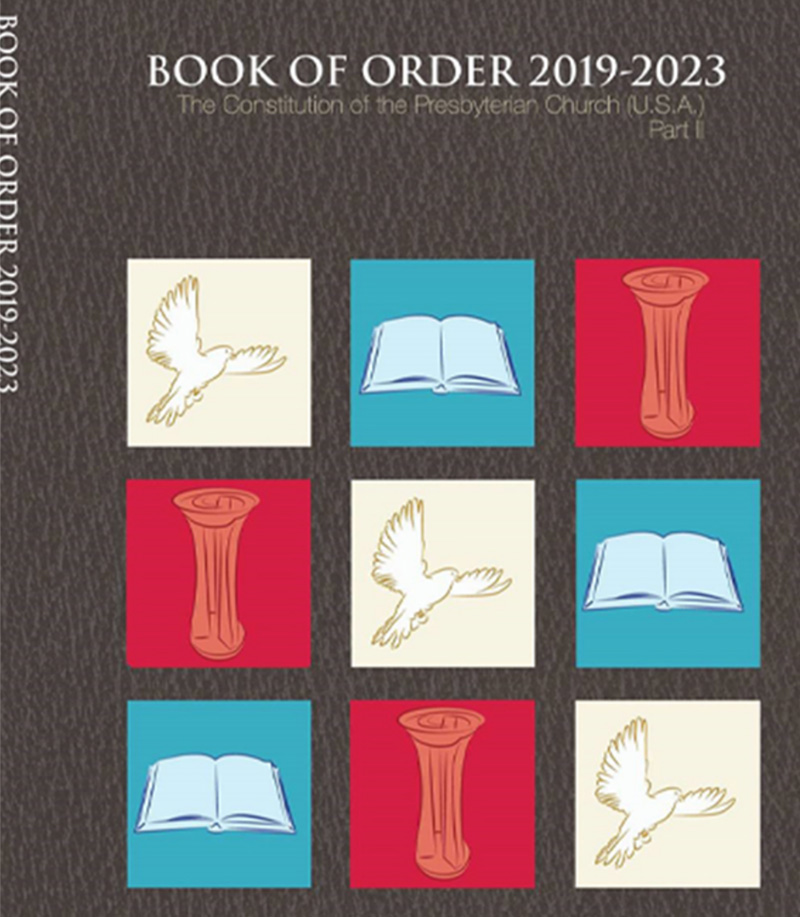 Cover of the Book of Order, via pcusa.org

Cover of the Book of Order, via pcusa.org

Claassen has been an ACC member for 6 years. He is also Executive of the Synod of the Trinity, a call he began earlier this year.

He described the committee’s work crafting comments for GA225.

“First we figured out what business is relevant to our charge, then we divided that work among the nine of us.” After discussions in three-person small groups, each item is discussed by the full committee.

That small- and large-group process makes it possible for any ACC member to speak to the full Assembly about any item reviewed, although “the initial sub-team and especially the primary author of a comment are detailed to committees doing that business,” Claassen said.

Griffith and Claassen noted that during plenary at least three ACC members are present to advise the full Assembly.

“At this Assembly that will be via Zoom just like commissioners,” Claassen said, “in case a commissioner has a question or if we feel the need to speak to something that hasn’t been sought. And if the moderator is inclined to recognize us.”

Reflecting on his experiences at past assemblies, he said, “The work is such a blur, by the end of the assembly we look back and think we did a lot.” Then he joked, “After that we think … now what did we do again?"

“Everyone on the committee doesn’t just love the PC(USA) but values the way of being Presbyterian that is shaped and defined by the constitution. We understand our way of doing justice and walking humbly as manifested in the Book of Order, whether perfectly or imperfectly.

“The Book of Order is really the embodiment of the ethos of the church. We work hard to make sure that the ways the Book of Order change reflect the leadership of that theology and ethos.

“Being true to that conviction means being thick-skinned during committee discussions,” Claassen added. “It can mean saying to other members, ‘This advice that you’ve written can be written better.’ We are loyal to the idea that our advice should be good.”

Members of ACC “can be more critical than most Presbyterians,” he said. “We spot things we think of as problems and name them."

“The culture of the committee means we don’t hold back from doing that. To leave something alone when you see a problem is not in the service of the Assembly.”

Learn more about the Advisory Committee on the Constitution: https://oga.pcusa.org/section/committees/acc