Home News Amending a recommendation to unify PMA and OGA

Amending a recommendation to unify PMA and OGA

Day 2 at the Financial Resources Committee 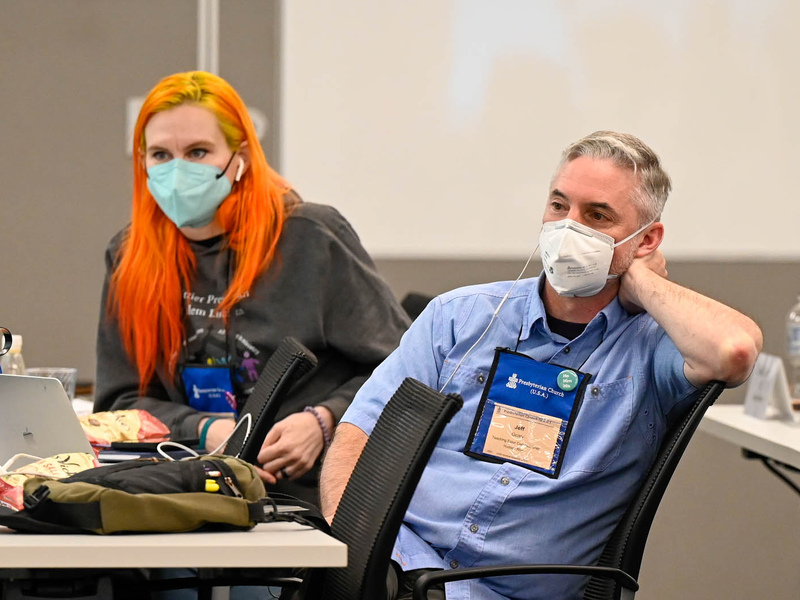 Maggie Goodwin, a teaching elder from Los Ranchos Presbytery, and Jeff Geary, a teaching elder commissioner from Hudson River Presbytery, listen to a discussion in the Financial Resources Committee. The fourth and final round of committee meetings at the 225th General Assembly of the Presbyterian Church (U.S.A.) started June 30, 2022 at the Presbyterian Center in Louisville, Kentucky. (Photo by Rich Copley)

Maggie Goodwin, a teaching elder from Los Ranchos Presbytery, and Jeff Geary, a teaching elder commissioner from Hudson River Presbytery, listen to a discussion in the Financial Resources Committee. The fourth and final round of committee meetings at the 225th General Assembly of the Presbyterian Church (U.S.A.) started June 30, 2022 at the Presbyterian Center in Louisville, Kentucky. (Photo by Rich Copley)

Day 2 at the Financial Resources Committee was light on items of business but heavy on discussion and discernment, much of it concerning the weighty matter of unifying the Presbyterian Mission Agency (PMA) with the Office of the General Assembly (OGA).

Reviewing and amending that proposal took up most of the committee’s day.

After morning worship, the committee started with a presentation for [FIN-11] 2023-2024 Mission Work Plan of the Presbyterian Mission Agency, spelling out PMA’s goals for the next two years, including continuing to build on the Matthew 25 invitation. A slide with the insignia of Matthew 25 framed most of a connected video presentation.

“The mission agency’s whole reason for being is to partner with presbyteries, synods and congregations,” said Schlosser-Hall. “Diane is always asking us to focus on discipleship.”

After a look at mission work and priorities, the presenters discussed new planned functions, including the Center for the Repair of Historical Harms and The Office of Innovation, Futuring, and Discernment. Those connect to PMA’s strategy to “assure that concerns around confronting racism, environment concerns, standing against violence and militarism, and advocating for the dispossessed come before the Assembly on a regular basis.”

“We seek permission-giving new ideas,” said Lisherness. “We notice that as we engage the core values of Matthew 25, we face new areas of intersection.”

She and Moffett added that the new initiatives do not mean PMA is moving away from its existing ministries, including World Mission, Special Offerings and Presbyterian Disaster Assistance.

The committee voted unanimously to approve the work plan as presented in FIN-11.

Then it was time for the main action of the day, consideration of [FIN-10] Align in Mission, Purpose, and the Use of Resources: Report of the Special Committee on Per-Capita Based Funding and National Church Financial Sustainability.

FIN-10 began with a presentation by special committee co-moderators Valerie Young and the Rev. Laura Cheifetz, who said that the need for PMA and OGA unification is urgent now, and that this urgency should be considered against any reluctance for change —reluctance the presenters said was understandable given the historic structure of the Louisville staff. The presenters also noted coordination with the Moving Forward Implementation Special Committee, and that group’s support of movement toward targeted unification of OGA and PMA.

The first of two recommendations from the special committee received the overwhelming amount of conversation from presenters, resource staff and committee members: “Form a commission to oversee and facilitate the unification of OGA and PMA into a single agency, revise the Organization for Mission to reflect this change, and work to align the entities, boards, committees, and constituent bodies of the General Assembly toward long-term faithfulness and financial sustainability of its mission within the Presbyterian Church (U.S.A.).”

The special committee’s second recommendation, about appointing “a Funding Model Development team to develop, recruit, implement, and provide oversight of possible funding model experiments,” was presented but little discussed on the day.

The special committee’s presentation shared how years of work on their report and recommendations, which included a listening tour that gave special attention to mid council voices, made them aware that “sustaining the witness of church” is the big problem, not individuals working in the current system. “This report is not an effort to supplant individuals in any way,” Cheifetz said.

Another non-problem? “Vision…we have an abundance of vision in the church.”

Per capita “was designed for a different church,” Young said. “As a denomination we are experiencing attrition,” with smaller and smaller presbyteries. In order to keep the current system, each group paying into per capita has to pay more, putting support of the national church and of mid councils in tension.

The special committee co-moderators shared examples of different ways per capita is collected by presbyteries. When per capita giving goes up, mission giving goes down, they said. Some congregations can’t or won’t contribute to per capita, forcing the presbytery to gather those funds from elsewhere. “Because of the pandemic, more of us see how per capita is based on an outdated model.”

They said the current system goes to reinforce the idea that faith is connected to the size of a congregation. Presbyteries don’t have the “capacity or frankly the inclination” to be a funds development arm of the national church.

“We are an incredibly wealthy denomination in all the ways,” said Cheifetz. “What we seek is a structure to better reflect our abundance.”

Recommendation 1 addressed the per capita question by calling for a commission to “review, address, and align the financial agreements including per capita, restricted, and unrestricted funds, among the Foundation, PMA, OGA, and the Presbyterian Church (USA), A Corporation (A Corp) to support the new Organization for Mission so that each area of mission has adequate funds to sustain its mission long-term.” That would help to ease “the squeeze” on presbyteries, the co-moderators said.

Resource staff from PMA and OGA and their governing boards (the PMA Board and the Committee on the Office of the General Assembly [COGA]) came to the microphone. Much of their focus was on the call for a unification “commission,” with the Rev. Stephanie Anthony and the Rev. Eliana Maxim of COGA voicing support for the idea of unification while advising changes to the language in the motion, including advice for the Funding Model Development Team called for in Recommendation 2.

The Rev. Warren Lesane Jr. and the Rev. Shannan Vance-Ocampo of the PMA Board spoke against Recommendation 1 and its call for unification to soon begin, citing concerns about any unification process that was led by people outside the two agencies jeopardizing recent efforts toward collaboration between OGA and PMA and current PMA program focuses, including the Matthew 25 invitation. Speaking later, the Stated Clerk of the General Assembly, the Rev. Dr. J. Herbert Nelson, II struck a similar cautionary note about any outside group directing the two agencies in any process of alignment or merger.

The Rev. Michelle Hwang of the Racial Equity Advocacy Committee raised concerns about the inclusiveness of the special committee’s work, which she said showed tendencies of white supremacy culture, including a sense of urgency that makes it difficult to be inclusive, promoting self-sustaining models of funding that ignore disparities of resources at the six different agencies and a lack of transparency around the comments from mid council respondents that the special committee based its recommendations on.

Hwang also said that a quick unification of OGA and PMA could result in one of the persons of color who lead those agencies losing a job.

During the questions phase of the committee’s work on FIN-10, two commissioners said that Hwang’s remarks gave them pause about approving a commission to unilaterally direct any unification.

The committee began discussing switching out “commission” for “task force.” Kerry Rice, deputy stated clerk in the OGA, said a commission can have the power to direct actions, while a task force usually has to bring back recommendations to the full Assembly for approval.

After meeting in small groups, committee members began to amend Recommendation 1 in FIN-10 accordingly, including switching out “commission” for “task force.” An amendment recommending that an outside facilitator should be used was voted down. Another amendment proposing incorporating written advice by the Advisory Committee on the Constitution (ACC), the A Corp and COGA was approved.

During the 10 minutes it took to work those changes into the language of the amendment in PC-Biz, Felipe Martinez, the Financial Resources Committee vice-moderator, said, “You guys are great,” to the patient but increasingly tired commissioners and advisory delegates. “This is difficult stuff. We’re working it through.”

After another amendment was approved eliminating what the vice-moderator called “problematic” pearls remaining in Recommendation 1, so that it was now clear the task force in the amended motion would operate with the restrictions of a task force, a final amendment changed the timeline for the unification work process. This moved the presentation of the plan for unification to the next Assembly in 2024, not the Assembly in 2026—when the original special committee recommendation had proposed the presentation of a final Organization for Mission be presented post-unification.

The finally amended Recommendation 1 was passed by the committee and will be taken up again together with Recommendation 2 from FIN-10 on Saturday, the last day of committee work in Louisville.