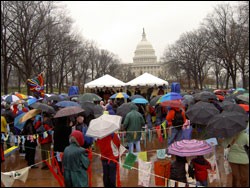 On April 29 and 30, Christians from around the country will gather in Washington to protest the ongoing war in Iraq and ask President Obama to bring a just and lasting peace to Iraq.

Christian Peace Witness for Iraq is an ecumenical group of partners committed to raising a Christian voice for peace. Founded about two years ago, the group is grounded in worship and scripture and is dedicated to public witness, advocacy and nonviolence.

The two-day gathering is in conjunction with Obama’s 100th day in office and will begin with speeches and workshops on April 29. That evening, participants will proceed from National City Christian Church to the White House, where they’ll bless and present loaves of bread to the administration. On April 30, some participants will make advocacy visits to Congress, in coordination with Witness Against Torture’s 100th Day Action.

“This is a key moment for supporting the new administration,” said Rick Ufford-Chase, executive director of the Presbyterian Peace Fellowship and moderator of the 216th General Assembly. “We are hopeful that the president or a spokesperson will join us for worship or to receive the bread.”

The bread will represent repentance for the war and the call to choose the way of life. For Christians, repenting is the first step in rebuilding relationships, Ufford-Chase said.

Civil disobedience — with some participants risking arrest — will also be part of the April 29 proceedings. The group will form two semicircles — one in “non-arrestable space” and one on the sidewalk in front of the White House, Ufford-Chase said. In order to avoid arrest, people must keep moving while on the sidewalk, but participants will stay in place.

Participants must decide for themselves if they want to risk arrest, and Christian Peace Witness has provided information about citations and the booking process on its Web site. The group had a similar gathering in 2007, with about 200 people out of about 1,000 being arrested.

“Civil disobedience is an obedience to a higher order. Minds and hearts and countries can be changed through civil disobedience,” said Susan Mark Landis, peace advocate for the Mennonite Church USA. “This is a group that knows how to witness to the government in a way that they can be heard.”

The group is hoping to create opportunities for real dialogue with the administration about ending the war in Iraq. The group aims to raise a collective voice in both protest and affirmation.

“We’re going in the spirit of supporting the president’s thrust for peace, but also calling on him to go further,” Butigan said.

Workshops at the gathering will focus on nonviolence and advocacy training, as well as a legal briefing on nonviolent direct action.

Speakers and preachers are:

At the White House worship and witness, speakers will be the Rev. Raphael Warnock, pastor at Atlanta’s Ebenezer Baptist Church, Martin Luther King Jr.’s spiritual home, and Catholic Kathy Kelly, who has been to Iraq 24 times and lived in Baghdad during the March 2003 bombardment.