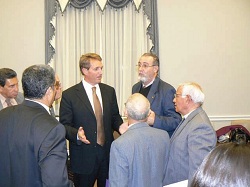 Rep. Jeff Flake (R-AZ) (center) speaks with the delegation at the congressional briefing. To his left are the Rev. Reineirio Arce Valentin and the Rev. Pablo Oden Marichal Rodriguez (profile). —Photo courtesy of the Office of Public Witness of the PC(USA).

On Nov. 15-16 the Office of Public Witness (OPW) of the Presbyterian Church (U.S.A.) hosted a delegation of high-level church leaders from Cuba.

OPW arranged for the delegation from the Cuban Council of Churches to meet with the U.S. Department of State, the National Security Council and the Commission for International Religious Freedom. The delegation also spoke at a Congressional briefing sponsored by U.S. Reps. Jeff Flake (R-AZ) and Jim McGovern (D-MA).

In meetings with the Administration, the delegation emphasized the need to remove severe U.S. restrictions on religious and other people-to-people travel to Cuba. The tightened restrictions,  initiated in 2005 under the Bush Administration, are a result of a new interpretation and application of the U.S. Code governing travel.

Because of this new interpretation, the Departments of State and Treasury stopped issuing general licenses to travel to Cuba for mission work to national church agencies and organizations. The government began issuing new licenses that substantially restrict religious travel by denominations and religious organizations, while providing greater Cuba travel access to individual congregations.

The restricted license limits religious travel to only four trips per year and requires applicants — such as Church World Service, the Episcopal Church, the United Methodist Church, the PC(USA) and others — to list on the application the names of up to 25 people who will travel under the license. This is a difficult hurdle for national churches as they do not know at the time of license application which church members will request travel in any year and changing the names on a license once it has been granted is very time-consuming.

U.S. denominations argue that it is also unrealistic to place a four-trip limit on denominational agencies representing millions of members. The Rev. Raul Suarez, director of the Martin Luther King Center in Matanzas, said the relationship between the U.S. and Cuban churches “was seriously impaired by the former Administration because U.S. churches were given very limited ability to travel to Cuba and many Cuban religious leaders were not given visas to come to the United States.”

The delegation informed the Administration that contact between the churches in Cuba and their counterparts in the U.S. — the PC(USA), for instance, maintains a vast network of relationships between PC(USA) congregations and presbyteries and the three presbyteries and 40+ congregations that comprise the Presbyterian Reformed Church in Cuba — is a good thing for the people of both countries, and when it is restricted it harms the Christian communities in each.

The religious leaders gave examples of how the U.S. embargo hurts the churches and the Cuban people by cutting off resources to them and limiting cross-cultural awareness from people in the United States.

With both Congress and the Administration, the delegation advocated for the lifting of the U.S. economic embargo of Cuba. The Rev. Pablo Oden Marichal Rodriguez, executive secretary of the Cuban Council of Churches and vice-president of the Evangelical Theological Seminary of Matanzas, Cuba, stated that the embargo has slowed down the development of the churches in Cuba and has prevented U.S. churches from participating in the mission of the churches in Cuba.

The Rev. Reineirio Arce Valentin, moderator of the Presbyterian Reformed Church in Cuba and president of the Evangelical Theological Seminary of Matanzas, expressed concern that U.S. restrictions on financial transfers prevent U.S. churches from providing retired Cuban clergy pension support owed to them for service during years when Cuban churches were missions of U.S. denominations, thus causing great distress to many elderly clergy.

To date, the Obama Administration has not eased the travel ban or the embargo, though he has med it easier for Cuban religious leaders, cultural workers, academics and others to get visas to come to the U.S.  This delegation visited the United States because of that decision.

Prior to coming to Washington, the group attended the National Council of Churches of Christ in the U.S.A. (NCC) General Assembly in New Orleans in cooperation with the PC(USA)’s Office of the General Assembly and visited Lakeview Presbyterian Church, one of those hardest hit by flooding following Hurricane Katrina.

Administration officials may be considering steps to ease the travel ban so that U.S. citizens, including church groups, could travel more easily and with fewer restrictions to Cuba. The delegation encouraged this movement by sharing the great desire of the Cuban religious community to be closer to sister churches in the U.S., and their desire to see the travel ban and the embargo end.

“The visit to Washington was an opportunity to combat prejudices and misconceptions about the church in Cuba, and showed the Cuban churches as vital and growing voices in their society,” said Catherine Gordon, OPW Representative for International Issues.

The Rev. J. Herbert Nelson, director of the OPW commented that “this type of advocacy is probably the least known part of the work of our office. We are blessed to be in working circles with interfaith and ecumenical partners who share a commitment to both domestic and international justice and freedom.”

Catherine Gordon coordinated the visit in cooperation with the Latin American Working Group, Church World Service, and the Washington Office on Latin America and furnished the information for this story.