Majority of presbyteries must approve change 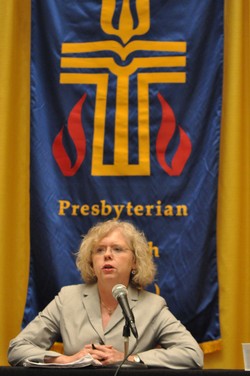 With a 50-vote margin (373-323-4), the 219th General Assembly of the Presbyterian Church (U.S.A.) approved an overture from the Presbytery of the Western Reserve that would amend the so-called “fidelity and chastity clause” of the Book of Order (G-6.0106b).

The amendment will now go back to presbyteries, where a majority of the 173 presbyteries must approve it for the change to make it into the Book of Order.

Ordaining and installing governing bodies have the responsibility of determining if candidates meet the standards for office. According to the overture, candidates are to be examined based on calling, gifts, preparation and suitability. Governing bodies, guided by Scripture and the confessions, would also determine candidates’ ability and commitment to fulfilling requirements stated in the constitutional questions for ordination and installation.

Speaking in favor of the overture, the Rev. John Vest (Presbytery of Chicago) said the PC(USA) must change its Constitution to move forward. The overture does more than just remove language – it adds language that is just and constitutional, he said. Ordination examinations should be “vigorous and robust.”

The Rev. William Reid Dalton III (Salem Presbytery) opposed the overture. With the GA’s approval of the Belhar Confession and the new Form of Government, presbyteries already have much to discuss, he said.

The assembly rejected a minority report from the Church Orders and Ministry Committee, which considered overtures related to ordination standards. The report called for a pastoral letter to be sent to sessions and for the reversal of authoritative interpretation issued at the 218th GA (2008).

The committee also approved an overture calling for an evaluation of the PC(USA)’s call system to find ways to shorten the amount of time that churches seeking a pastor are without one.

At a press conference following the assembly’s vote, committee moderator elder Theresa Denton said she’d like conversations about ordination standards to be about trust rather than fear or anxiety. She said she doesn’t see the proposed amendment as a move toward lowered standards, but toward increasingly higher ones that look at the totality of a candidate’s life.

Elder Cindy Bolbach, Moderator of the 219th GA, said she believes that, for the most part, people are committed to staying in the conversation.

“It’s the ties of the heart that bind us together … even as we deal with this particular issue,” she said.