'a man and a woman' to remain in Constitution 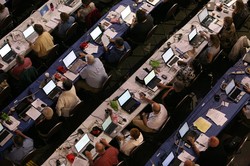 Plenary at the 219th General Assembly (2010) at the Minneapolis Convention Center. —Photo by Danny Bolin.

The 219th General Assembly (2010) voted Thursday night to maintain the current definition of marriage — between a man and a woman — in its Constitution.

Just prior to the Assembly’s action, the body accepted the recommendation of the General Assembly Civil Union and Marriage Issues Committee to approve the report of the Special Committee to Study Issues of Civil Union and Christian Marriage by a vote of 439-208. The Assembly decided to send both the special committee report and the minority report generated by three members of the special committee to the larger church for study after a motion to replace the final report with the minority report was defeated, 358-311.

Following that action was a parliamentary maneuver that resulted in the Assembly voting to let the approval of the special committee report “answer all pending items” on the remaining Assembly committee’s list of overtures that included changing the definition of marriage to “two people,” giving pastors and sessions discretion in deciding who may marry and whether they may use church property for the ceremony.

The vote was 348-324, with six commissioners abstaining.

Audible gasps were heard on the floor of the Assembly, and many commissioners and observers burst into applause as the result of the close vote (51%-49%) flashed on overhead screens at the Minneapolis Convention Center.

The overtures, which were never considered by the full Assembly, had passed the Assembly Committee on Civil Union and Marriage Issues by approximately 2-to-1 margins.

The Rev. Ryan Balsan of New Brunswick Presbytery, who moved that the study should answer the overtures, said he did not want those overtures to prejudice the study process.

“The church was not yet ready to make a decision,” said 219th General Assembly Moderator Cindy Bolbach during a press conference following adjournment. “This kind of thing happens at every assembly.”

While many people will see the vote simply as winning or losing — “that’s human nature,” the Moderator said — Bolbach said more helpful thinking involves “trying to figure out where God is leading the church. Women’s ordination took us years and years to decide.”

At the same event, the Rev. Rick Nutt, moderator of the Assembly committee, said that “it would have been interesting” to discuss the overtures on the Assembly floor, “but the will of the Assembly is to pursue those issues in conversation,” meaning allowing churches and presbyteries to study the two reports.

Acknowledging the complexity of the decision to send both reports to the church-at-large, Stated Clerk of the General Assembly the Rev. Gradye Parsons said, “We’re going to have to draft a pretty good cover letter.”