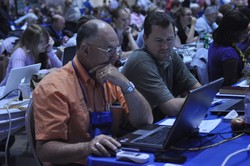 After nearly two hours of debate on Thursday evening, the 219th General Assembly (2010) agreed to refrain from holding national meetings in states where travel by immigrant Presbyterians or Presbyterians of color might subject them to harassment due to legislation.

The overture, which passed 420-205, was presented in light of a recently enacted Arizona law that many feel unfairly targets Hispanic Americans.

“Racism must be confronted with action,” said Fife.

Ufford-Chase cited PC(USA)’s “historic concern for those who stand on the fringe of our society.”

Those opposing the recommendation said the wording was “too vague” and that the church “did not need to impose such harsh restraint.”

The 220th General Assembly is scheduled for Pittsburgh in 2012. Pennsylvania has immigration laws similar to those in Arizona. Stated Clerk the Rev. Gradye Parsons said the General Assembly would take a “serious look” at the situation if the need arises.

“In the end, we would follow the directions of the Assembly,” said Parsons.