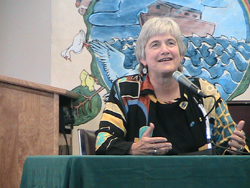 The Rev. Jane Adams Spahr testifies at her trial for violating her ordination vows by conducting same-gender marriage ceremonies. —Photos by Anitra Kitts

The Rev. Jane Adams Spahr was convicted by the Presbytery of the Redwoods Permanent Judicial Commission (PJC) Aug. 27 on three of four misconduct charges of performing same-gender marriage ceremonies during the time they were legal in the State of California.

Spahr, 68, an honorably retired member of the Presbytery of the Redwoods,  was charged with presiding over the June 20, 2008, marriage ceremony of a same gender couple while such marriages were recognized and recorded as legal by the State of California.

In addition Spahr was charged with presiding over an additional 15 same-gender marriages during that period of time.

The third charge was that in presiding over the secular marriage ceremonies, Spahr was violating her ordination vows by failing to obey an Authoritative Interpretation of the Presbyterian Church (U.S.A.)'s Book of Order.

The denomination's constitution defines marriage as between "a man and a woman." The church’s highest court — the General Assembly Permanent Judicial Commission — has ruled that same-sex ceremonies cannot be conducted in such a way as to be held out as marriage ceremonies.

The PJC's vote on the three charges was 4-2 and it acquitted Spahr on a fourth charge of failing to "further the peace, unity and purity of the church."

Instead, the court said "We commend Dr. Spahr for helping us realize that peace without justice is no peace."

The PJC voted to verbally rebuke Spahr, the lightest of five possible punishments listed in the constitution, and to instruct her to "... avoid such offenses in the future." It then stayed the rebuke and injunction in case of an appeal.

The verdict was read after a two-day trial and 24 hours of deliberations. The court heard testimony from 10 of the couples married by Spahr, expert witness Deborah A. Krause, dean of academic affairs and New Testament professor at Eden Seminary, and extended testimony from Spahr.

When the verdict was announced gasps and sounds of weeping could be heard from the couples, who were seated behind Spahr in the gallery.

Even before the hearing was formally concluded, the couples as well as many observers pushed forward to form a tight circle of prayer, singing and comfort.

PJC members remained near their table after the hearing, until Spahr and some of the couples came and spoke to each one.

"I am deeply saddened," Spahr said after the judgement was read. "We had before this committee the most amazing people and couples and still they said 'No.' I'm stunned."

The accusations against Spahr were filed by a ruling elder from Redwoods Presbytery. The elder's identity was protected as is permitted in the Book of Order. The accusation was accompanied by written documents that included a certified marriage certificate of one same-gendered couple whose wedding Spahr performed, a newspaper article interviewing the participants and a copy of a previous General Assembly PJC (GAPJC) decision (Discipinary Case 318-12) on same-gender marriage from April 2008.

In that 11-page decision, Spahr — who has been active in sexual orientation/identity ministry within the PC(USA) for decades — was acquitted on appeal of charges that she performed two same-sex marriages in 2005. At that time same-gender marriage was not legal in California, so the court ruled that the ceremonies Spahr conducted could not rightfully be called marriage ceremonies, though she called them that at the time.

The binding authority of that ruling — the GAPJC cautioned Spahr as part of its Authoritative Interpretation of the constitution not to represent same-gender ceremonies as weddings — and the implications of the changing civil definition of marriage in California was at the center of the Aug. 24-27 hearing in the reception hall at Covenant Presbyterian Church here.

The prosecution counsel, Joanna Blackstone an elder member of the Redwoods Presbytery, argued that the previous GAPJC ruling included a clear mandate against representing same-sex unions as marriages as defined by the Book of Order. Blackstone, who praised Spahr’s life-long ministry within and on behalf of the gay, lesbian, bisexual and transgendered (GLBT) community, nevertheless argued that “there is a bright line” between marriages that are legally established by the state and marriages blessed by the church.

"This is an ecclesiastical trial," Blackstone said, "and we are not here to debate civil law."

"There are ways to seek that change, but this [judicial commission] does not have the authority," she said referring to several overtures on the definition of marriage submitted and debated at the recent July meeting of the General Assembly. "This [commission] does not have the authority to change the constitution," Blackstone declared throughout the course of the trial.

Spahr's defense counsel, Scott Clark, a lawyer and candidate for the ministry of the Word and Sacrament and the Rev. Beverly Brewster, a former trial lawyer, challenged the standing of  the 2008 GAPJC decision, saying that the PC(USA) constitution lists only two reasons for a disciplinary trial: a violation of scripture or a violation of the constitution.

Clark and Brewster then argued that even if the GAPJC decision had standing, it was still subject to the, "... authority of Christ's Gospel, as revealed in Scripture and expressed in the constitution," Clark said.

"Your decision impacts real people in real lives," Clark said in his closing argument. "It's never, ever a choice between individuals and a book. Our faith is only as important as the way we live it out with each other." The defense cited Mark 3:1-6, a story of Jesus confronting religious leaders over a Sabbath healing, at several points in the trial.

The prosecution called no witnesses.

Krause noted that one of the PC(USA) predecessor denominations, the United Presbyterian Church in the U.S.A., changed the definition of marriage in its constitution in the 1950s in response to cultural changes that opened up the opportunity for remarriage in a church after divorce.

Thus, Krause noted, marriage is a unique blending of state and church authority.

"Calvin taught that the civil authority creates the contract and the church solemnizes it," Krause said.  When the definition of marriage was in harmony between the two institutions, Krause continued, the 2008 authoritative interpretation had logic.

But when California and five other states plus the District of Columbia extended the legal definition of marriage to same-gender couples, Spahr and other ministers of the word and sacrament were left without guidance.

Spahr petitioned the GAPJC for additional guidance when the California Supreme Court legalized same-gender marriage a few months after the GAPJC's 2008 ruling. The GAPJC declined to issue clarification.

Thus, Krause argued, there was no violation of the ordination vows because there was no disciplinary advice to rely on after California legalized same-gender marriages.

Ten couples then testified over the course of about six hours. Many testified to how being married by Spahr was an extension of a pastoral relationship of years with her. Others spoke of how Spahr’s pre-marital counseling helped ground their intention to marry within their spiritual traditions. Several talked about how a formal wedding helped their families celebrate with them.

"You go to all these weddings of your brothers and sisters and then the nieces and the nephews and then, it's your turn," Constance Valois, who is married to Barbara Jean Douglass, said. "It brings the family in with all the cooking and the 'go do this' and 'go do that.'"

As a wedding present, an aunt put together a shellacked family tree that listed the couple on par with all other relationships in the family, Douglass said. “We stopped being invisible. There we were right in the middle.”

The prosecution declined to cross-examine all but the first couple, one of whom had served as Spahr's counsel in the 2008 case. "We've made no objection to the witnesses called by the defense who did not have to be here but have chosen to be here," Blackwell told the PJC. "Their testimony is being heard out of respect for their feelings," she said, "but we still have the facts and the law. The decision has to be made on that basis."

Spahr testified for several hours aobut the length and breadth of her ministry. Spahr, a grandmother and a resident of San Rafael, Calif., said she was deeply shaped by her first call in an urban Pittsburgh congregation as a white minister in an African-American community.

While serving her second call as a youth minister at San Rafael's First Presbyterian Church, she came to accept herself as a lesbian, which led to a period of time when she was not in active ministry. With a catch in her voice, Spahr described the acceptance she experienced from her sons and her then husband, Jim Spahr, who was present at the trial.

Spahr's path back into ministry led her to a ministry of  support to gay men and their families during the height of the HIV epidemic in San Francisco through the Metropolitan Community Church.

Her call to serve as co-pastor of Downtown Presbyterian Church in Rochester, N.Y., was blocked by the GAPJC. The congregation then hired her as a "lesbian evangelist," and she co-founded "That All May Freely Serve," a PC(USA)-related orgination that works for the full inclusion of LGBTY persons in the church.

"There can be no peace in this church until there is justice," Spahr said. "I am inviting the church into unity with these couples. These marriages are legal, they are honored by the (civil) institution and I want it to be honored by the church. As pastors we have a huge responsibility to perform marriages which are both a church and a civil function. We can not ask pastors to bifurcate themselves, to do one part of a marriage but not the other," Spahr said. 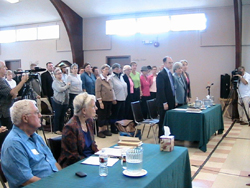 The ten couples stand with Janie Spahr and Defense Counsel Scott Clark and Beverly Brewster for the reading of the decision. Jim Spahr, Sphar's former husband and long-time supporter, sits with Prosecuting counsel JoAn Blackstone who is a friend of the Spahr family.

PJC members were clearly uncomfortable as the decision was read. "... we call upon the church to re-examine our own fear and ignorance that continues to reject the inclusiveness of the Gospel of Jesus Christ," Jim Jones, moderator of the commission and elder member of First Presbyterian Church, Napa, read from the podium. "... We say this believing that we have in our own Book of Order conflicting and even contradictory rules and regulations that are against the Gospel ... marriage can be between same gender as well as opposite gender persons, and we, as a church, need to be able to respond to this reality as Dr. Jane Spahr has done with faithfulness and compassion.

"Notwithstanding the foregoing, we are constrained to accept that the following language in GAPJC Disclipinary Case 318-12 is authoritative and should be followed until and unless modified."

The decision concluded, "We implore the Synod and General Assembly levels of our church to listen to these testimonies, which are now part of this record, to take them to heart, and to do what needs to be done to move us as a church forward on this journey of reconciliation."

"I am deeply proud of the PJC and all involved with the process," Redwoods Executive Presbyter and Stated Clerk Robert Conover said, "and I am profoundly moved by the sadness of those who feel hurt by this decisions."

Spahr spoke to waiting media as she left the building with a number of her supporters. "See us?" she said. "Here we are. We're still here."

Anitra Kitts is a free-lance writer in northern California and a candidate for the ministry under the care of the Presbytery of the Cascades.

Tags: permanent judicial commission, presbytery of the redwoods, same-gender marriage, that all may freely serve