Home News ‘A wave of the Spirit’

‘A wave of the Spirit’

Fresh expressions of church taking root in the UK 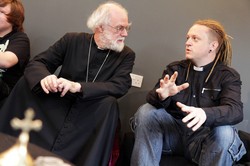 Rowan Williams, the Archbishop of Canterbury (left), recently attended the launch of a fresh expression known as The Order of the Black Sheep for those who feel they don’t fit in with society. —courtesy of the Diocese of Derby

The Church of England might not be best known for its entrepreneurialism, but that hasn’t stopped a fresh wind of the Spirit from blowing through its ranks.

Called Fresh Expressions, it is a movement of “planting congregations of Christian people among groups, communities and networks with whom the church as it now stands has no impact or little effect,” said Bishop Graham Cray. The Anglican is the leader of this ecumenical partnership that includes the Methodist Connexion, the United Reformed Church, and the Congregational Union.

“We unite locally for the sake of others, and for their sakes we address a shared weakness: the ineffectiveness of many of our historic approaches to mission to engage with many parts of our current society.” Cray said.

Underlying the movement, now in its seventh year, is the fundamental assumption that the mission of the church is to participate in the mission of God.

The movement has been covered extensively in the British Christian press.

“We seem to have caught, or been caught up by, a wave of the Spirit, and our central task is not to fall off!” Cray said.

That wave is also flooding through the Methodist Church in Britain, where nearly one in five congregations is encouraging new forms of church for those who non-members. One thousand fresh expressions meet regularly in more than 700 churches.

“Fresh Expressions is about going out and staying out — and it doesn’t mean duplicating your own church,” said Stephen Lindridge, is Fresh Expressions’ connexional missioner for the Methodist Church. “Part of what the movement has done is to help people as they begin to think again about, ‘What is a church?’ and ‘What does it mean to build an ecclesial community?’

“The answers may mean that they will look very different to what is generally perceived as church, so they may meet in a skateboard park or as part of a farmers’ market — though the majority are simply in neighborhoods, reflecting their context and culture, in a way that’s appropriate to the community they serve,” Lindridge said.

He cited the story of one Methodist pioneer — the term used to refer to those who are planting such communities — who was sent to be part of a new housing estate. Bart Woodhouse and his family had moved into the development as it was being built.

Woodhouse tells of his experiences in a Fresh Expressions DVD saying, “As more and more people began to move here, one of the things I was very keen to do was to start a Residents’ Association. We had an informal meeting in a building nearby and had about 40 or 50 people come along. We made it very clear we were a church and that we wanted to work to try and build community here, firstly by getting residents together in that Association and giving them a voice.”

Woodhouse’s work subsequently brought him to the attention of the town council, which offered him office space so he could help them with the area’s community cohesion.

Of course, as Bishop Cray frequently points out when speaking about Fresh Expressions, relationships are not quickly forged.

“People can be very suspicious, wary as to why you are doing something new,” he said. “It may be difficult for them to understand it’s because they’re worth it and God loves them. That’s why it can take a long time to build relationship and develop community.”

“It is a very slow process. In business terms you may plan to do something to get a particular outcome — but, as we know, it doesn’t always work like that in life, in church, or when you are planting a fresh expression.”

In spite of its steady but sure approach to development, the Fresh Expressions’ movement seems to be taking root, thanks in part to three factors, Cray said.

“First, there is a new imagination about the form and shape of church. That new shape is being formed around the idea of mission, rather than mission being simply one program within the larger organization,” he said. “Second, there is a new era of permission and encouragement by church leaders.”

This support extends all the way to the Archbishop of Canterbury, Dr. Rowan Williams, who recently attended the launch of a fresh expression known as The Order of the Black Sheep for those who feel they don’t fit in with society.

The third major factor in the story so far is the training resources developed and made available by the Fresh Expressions team.

“Parishes can imagine appropriate fresh expressions of church, are permitted to take the risk of starting one and are encouraged to do so — with training and materials available to show them how,” Cray said.

The traditional church continues to have a vital role to play, he said.

“The phrase coined by Archbishop Rowan Williams was ‘mixed economy’ in that traditional and fresh expressions of church complement each other in what they do. Any idea that fresh expressions are the Church’s sole answer to the challenges of mission in today’s society is wrong,” Cray said. “It is not a case of ‘either/or;’ it is very much ‘both/and.’”

But the traditional church must also “realize that sometimes something comes along that is new, and of God, and such is the interest and the sheer take-up of it that you have to listen to what is going on,” he said. “It is, of course, easy to say, but can be difficult to do.”

The important thing is for the traditional church and the fresh expressions of church to remain in conversation and in relationship.

“Looking to the future we don’t know how things will develop; some fresh expressions may well come to an end but that is fine; they may only be right for a season,” Lindridge said. “We are not here to build our own empire, we are here to encourage, enable and resource others to reach those the Church hasn’t yet reached."