Home News The dance of life and death

The dance of life and death 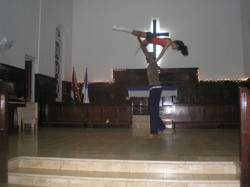 Liturgical dancers at the annual worship service to support ministries with persons with AIDS and their families and caregivers at the Evangelical Theological Seminary’s chapel —Jerry L. Van Marter

The liturgical dancers circle each other at a distance, then move closer together, then join in an intimate pas-de-deux. They then separate, dance alone at opposite sides of the chancel, then come swirling together again, the man sweeping the woman off her feet and up into the air in a graceful lift before setting her gently back down onto the floor.

The dance ― of separation and connection ― is both beautiful and haunting … especially because it depicts the ambiguity and ambivalence of human relationship in the age of HIV/AIDS in Cuba.

The dance is part of an annual service of worship in the chapel of the Seminario Evangelico Teologia (Evangelical Theological Seminary, or SET) here marking the partnership of the seminary and the HIV/AIDS Center in Matanzas to combat the disease and the stigma attached to it.

During her remarks, the Rev. Ofelia Ortega, world-renowned Cuban theologian and church leader, says that the theme for this year’s joint activities between the seminary and the HIV/AIDS Center is “0-0-0” ― “Zero new infections, zero deaths, zero discrimination,” she tells worshipers.

Later she tells the Presbyterian News Service that her interest in HIV/AIDS ministry “is because, as we read in Ezekiel 47) the people of God must pay attention to what is happening in the city. I wanted to see what we could do as a seminary about how to go out ‘for the healing of the city’ because that’s where our students will serve as pastors.”

Ortega launched the  annual worship service for seminary students, HIV+ persons and AIDS sufferers and their families and caregivers and others in Matanzas ― a city of 150,000 about 100 miles east of Havana on the northern coast of the island ― during the time she was president of the seminary between 1996 and 2004. 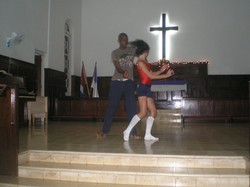 But the seminary’s involvement in HIV/AIDS ministry dates back almost to the first awareness of the disease in Cuba in 1986. “The problem we’re confronting now,” Ortega says, “is that because of all the medical advances, people just shrug and say, “Oh well, it’s curable.’”

Cuba has done an effective job of prevention and treatment and has one of the lowest HIV infection rates in Latin America. There are an estimated 12,200 HIV+ persons in Cuba, about 500 of them in Matanzas. “The problem is much worse in Havana, because of the tourists and all,” Ortega says. “But overall, our work has been so effective that the U.N.’s Global Fund for AIDS (UNAIDS) came to Cuba one month ago to do research on our success.”

Ironically, for several years, UNAIDS funding for Cuba’s efforts was blocked by the U.S. economic embargo.

HIV/AIDS ministry is part of the seminary’s curriculum. Ortega, who teaches theological ethics, dedicates one entire class session each semester to the issue, inviting a speaker from the HIV/AIDS Center ― usually her close friend Pablo Omar Milian, who is HIV+. “We also invite speakers from the center to speak to visiting groups at the seminary,” Ortega says, “because everyone must understand that this is a global issue.”

Ortega, who is currently one of the seven regional presidents of the World Council of Churches (WCC), has been instrumental in the global church’s efforts to combat the disease worldwide. In March 2010 she attended a meeting of some 40 religious leaders around the world to develop the first interfaith response to the AIDS pandemic. The group ― Christians, Jews, Hindus, Buddhists, Ba’hais, Muslims and Sikhs ― met in Amsterdam under the auspices of the WCC’s Ecumenical Advocacy Alliance. 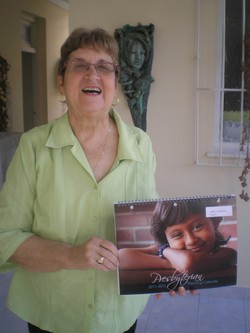 “The good thing about that first meeting,” Ortega says, “is that there were HIV+ and AIDS young persons there ― to listen to them and learn about their lives was most important.”

A second meeting of the group, last month in Canada, produced a commitment, “Together We Can Do More,” that includes stringent agreements to provide reports on what various faith communities are doing to extend their efforts to combat the disease.

The most recent initiative of the Cuban partnership is a program for children whose parents are HIV+ or have AIDS in Holguin, at the eastern end of the island near Guantanamo. “First, we’re trying to find nutrition for them,” Ortega says, “so we started a chicken farm for them so they’ll have eggs. We can’t just tell these children Bible stories,” Ortega says. “We have to care for them.”

The first batch of chickens came from Canadian theologian Phil Joudrey, who solicited contributions to purchase chickens for his birthday.

The ecumenical effort, led by a Quaker, Maria Ji, also includes a sex education program. “We have to help the children with sex education,” Ortega says, “to help them not be afraid.”