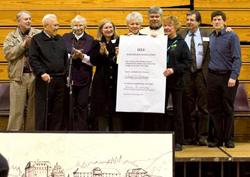 An enthusiastic crowd at the Hames Center cheered and applauded Saturday (March 12) as the Sheldon Jackson College (SJC) Board of Trustees presided at a symbolic passing of the torch, transferring ownership of the college’s campus to the Sitka Fine Arts Camp.

“This place has caught my personal love and attention,” trustee Arliss Sturgulewski said to the crowd of more than 200 in the Hames Center gym.

“We are extremely fortunate to have the Sitka Fine Arts Camp come into this community with their vision and leadership,” she said. “There was a tremendous amount of volunteers, which is a compliment not only to (executive director) Roger Schmidt … but the community and Sitka for what you’re bringing to this place.”

All seven trustees who stayed on the board during the college’s financial crisis were present for the ceremony. They jokingly referred to themselves as “the Steadfast Seven” or “the Surviving Seven.” They attended a board meeting later in the day where they received reports from community volunteers working to preserve and safeguard SJC archives and artifacts remaining on campus or being stored elsewhere.

The SJC campus was transferred officially to the Fine Arts Camp on Feb. 1, but the ceremony was scheduled for March 12 so all trustees could attend.

Sturgulewski paid tribute to the 133 years of history of the school, which was started as a training school for Alaska Native boys by John Brady and Fanny Kellogg in 1878. The school was named after Presbyterian missionary Sheldon Jackson, who raised funds for the school, after his death in 1910.

Sheldon Jackson operated as a boarding high school until 1967. The (junior) college program began in 1944, became accredited as a four-year college in 1966 and closed its doors at the end of the 2007 school year.

“We want to thank the trustees of Sheldon Jackson for having faith, faith in the health of the organization to bring this campus back to life,” Grussendorf said. “We are excited, we are thankful and we are humbled by the job we’re doing together.”

Schmidt said he wanted to thank SJC trustees for the choice they made following the closure of the historic school in 2007 to keep the core campus intact. “As a lifetime community member, there was a lot of fear about what might happen and what might not happen,” he said. “The trustees had a lot of choices and they could’ve just left it … I feel incredibly thankful. The trustees have found a way to keep it alive, to keep it in the hands of the community. I want to thank you for that.”

The comment drew a lengthy applause from the audience.

“Courage brings courage and they had the courage to do that,” Schmidt said. “I feel humbled to take the next step to meet that courage.”

Both SJC trustees and Schmidt commented on the work done so far to fix up the campus, and the encouragement the arts camp has received from many members of the community.

“Today I wish Roger and his crew well,” said Fawcett. “The legacy of Sheldon Jackson will live on and produce people who will leaders of this great state of Alaska.”

Sturgulewski, a longtime Alaska state legislator and SJC trustee, said after the ceremony that she had promised herself she would not cry that day, and so far had been successful.

“It’s a day of a lot of emotion,” she said. “It’s been both an opportunity to be so thankful of the past and the accomplishments of this institution, and the serving of Alaska Native people. I also feel sadness for the fact that the past is truly behind us.

“I’m very excited about the potential that Roger and his merry gang of helpers are bringing not only to Sheldon Jackson, but also to the community and the state,” she said. “I think we’ll see not only wonderful music … but opportunities for all kinds of things: workforce development, conventions and meetings, educational opportunities. I see one more step in the future of a place I dearly love.”

Rob Allen, a member of the trustees board, said he’s excited about this step.

Scores of volunteers have been pitching in to fix up buildings for occupancy by the Fine Arts Camp this summer. The Hames Center opened on Feb. 1, and will be run by volunteers for the first four months. About 30 Sitka High School students showed up for more work the day after the transfer ceremony.

Allen said that although he is impressed with the effort so far, he has some concern about the work ahead, including major capital campaigns that are being undertaken by several groups associated with the campus. He said it may be a good idea for the organizations to cooperate on their capital campaigns.

Allen said he hopes SJC will now be seen as a part of the community, not as a separate community, as it may have been in the past.

“This has the potential for going away,” he said. Allen said his biggest disappointment currently is with the city administration and the Sitka Assembly, and their lack of support, including no relief to SJC on a property tax assessment as an educational institution.

“It blows me away,” Allen said. “I can’t believe it, the lack of support.”

Although SJC was granted relief in secured debt from its main creditor, Alaska Growth Capital, the college still has about $200,000 in unsecured debt owed to individuals, vendors and businesses in and out of town.

Many of those gathered for the ceremony were volunteers on the campus, Hames volunteers and supporters of the Sitka Fine Arts Camp. Assembly members who attended included Mayor Cheryl Westover, Thor Christenson, Phyllis Hackett and Mim McConnell.

Assembly member Phillis Hackett said she personally supports the arts camp and is “fully on board” with its mission to take over the campus. But she said she didn’t know what kind of support would be offered by the city or Assembly.

“I applaud Roger and the board for climbing on that little peak,” she said. “The city should be behind this. I just hope we as an Assembly should see our way to help in any way we can, and not just put up necessary roadblocks because there are many of them.”

“It was at fine arts camp where I developed my love of film and filmmaking,” said Rusk, 20. “It shaped me and showed me what I want to do with my life.”

Tracy Turner, a SFAC board member and alumna, proudly wore an “Art is for Sharing” pin she had from her years of camp on the SJC campus in the mid-1970s.

“I’m so excited, I can hardly stand it,” she said. “To me, this is an opportunity for our whole town.” She said she supports camp not only for furthering kids in their arts education, but getting them to try new art forms, and in helping them see their potential.

“We’re standing at the beginning of something, where years later we’re going to say, ‘I can’t believe I was there when it started.’”

Jennifer Robinson said she was attending as a camp alum, and as Chamber of Commerce director.

“It’s got me excited about what’s going on here,” she said. “It seems like a good thing to support.” She said she is interested in the economic development potential for the campus.

Former camper Sarah Reynolds said she wanted to show her support for the effort.

“I was a camper for a long time, and I met a lot of my friends on this campus,” said Reynolds, now studying to become a nurse. “I’ve always thought the Sitka Fine Arts Camp should take over this campus from Day 1,” she said.

Gus Adams said he was pleased with the decision to turn the campus over to SFAC.

“It’s great to see the turnover to a real dynamic organization that is developing the youth of tomorrow,” he said. “I think it’s off to a great start and it’s going to work to succeed.”

After lunch the board of trustees heard from various groups about SJC’s archives, books and records.

Those who spoke, on behalf of the Sitka Historical Society, Sitka Library Network, National Park Service and the Alaska State Museum, talked about their desire for items to remain in Sitka as much as possible, properly preserved and accessible to the public. Bob Banghart, chief curator for the Alaska State Museums, attended the trustees meeting and gave assurances that there is now no time limit on the museum’s agreement to store SJ archives, which originally was for three years.

Discussed were such SJ properties as the 961 glass plates and prints by E.W. Merrill, Alaskana books from Stratton Library (which the college sold to the state), the C.L. Andrews collection and the SJC archives.

Allen said that the trustees for the most part supported the recommendations of the various working groups in Sitka.

“We were amazed at how much this ad hoc group has done,” he said. “No matter what happens, or where this stuff goes, it will be taken care of.”

He said the next step will be to take up the Alaska State Museums’ offer to hire an archivist to review the collection of papers, records and artifacts now being stored in Sweetland Hall, and make a recommendation to the trustees.

He said the trustees will continue to meet, and work on raising money through land sales in an effort to pay off unsecured debt and establish and endowment for Sitka Fine Arts Camp scholarships.