Home News Lives transformed: Maseabane and the people of Lesotho

Lives transformed: Maseabane and the people of Lesotho 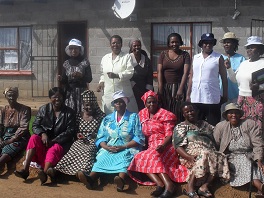 Some women members of KKM dance and sing a praise song as they pose for a picture at a meeting of KKM. —Photo by Bridgette Hector.

Maseabane, a grandmother in the small African country of Lesotho, is a prolific planter of seeds.

She sows seeds in the earth so she can feed her three grandchildren whose parents were victims of the AIDS pandemic and drug abuse. She also sows seeds of hope across her country through her work as an advocate for small farmers.

The seeds she sows for sustenance come from a seed bank supported by Kopano Ke Matla (KKM), which in the Se Sotho language means “with unity in strength we fight hunger.”

KKM is part of the Joining Hands, a ministry of the Presbyterian Hunger Program. Joining Hands links churches and nonprofit groups in other countries with Presbyterians in the United States.

In Lesotho, as in other developing nations, small farmers struggle as agribusiness gains a larger foothold.  Thanks to the efforts of KKM’s community grain banks, a growing number of small farmers are able to save, store and share seeds and maintain their livelihoods, says Bridgette Hector, a Presbyterian mission worker who facilitates Joining Hands networks in Lesotho and neighboring South Africa.

The seed banks decrease dependence on genetically modified and hybrid seeds that must be purchased every year. Through seed banks, farmers have a sustainable seed supply that depends solely on the cooperation of local farmers. The KKM farmers store seeds that produce maize, sorghum, wheat and beans.

Meseabane, one of about 75 female farmers in the 300-member KKM, serves on the group’s core team. “She lives very deep in the mountains, but she comes to every meeting, is involved in every project, and she speaks up,” Hector says. “That’s a rarity for women in the patriarchal society of Lesotho.”

KKM benefits all its members, but Hector says it has given its female members a voice in society and “a quality of life they never would have experienced.”

Joining Hands Lesotho is partnered with the Los Ranchos Presbytery in California, and Hector helps build bridges between KKM and the presbytery. Presbyteries in the Joining Hands program stand with their international partners through relationship-building, prayer and advocacy.

Four times a year the members of KKM come together in the capital city of Maseru.  “They stay in a church, hear speakers from around the world, and join in praise and worship,” Hector says.

They also are equipped to be better farmers and more effective advocates, Hector adds. “It’s practical education that empowers people.”

Around Lesotho, KKM is promoting locally produced seeds and farming methods that do not require chemical fertilizer.

“Foreign seeds (both hybrid and genetically modified seeds) and chemical fertilizer are becoming more expensive and unaffordable to poor farmers,” Hector explains. “As a result, many fields are lying fallow. The more fields that lie fallow, the more risk of forfeiting the fields to wealthier people, including foreigners.”

Hector says KKM’s goal is for Lesotho to produce enough food to feed its people year-round without relying on imported seeds, fertilizers and food.

While she sees lives transformed around her, Hector says her own life has changed because of her work among people who have deep faith but few material resources. “I’m not as concerned as I was years ago about being in control,” she says. “The reality that I can have nothing and still have God’s love is transforming me a lot.”