Home News Human Trafficking: The Story of Mariano Lucas and the Impact of the Campaign for Fair Food

Human Trafficking: The Story of Mariano Lucas and the Impact of the Campaign for Fair Food 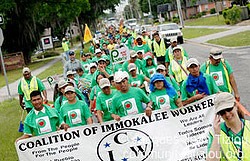 Mariano Lucas punched his way through the ventilation hatch in the ceiling of a box truck in the town of Immokalee, Florida.  Mariano and his co-workers were held captive for more than two years, forced to labor and deprived of wages for harvesting tomatoes in Florida.

US Assistant Attorney General and Presbyterian Doug Malloy, who handled the case, characterized their condition as “slavery, plain and simple.”

Each man bore marks of heavy beatings to their head and body.  One man’s hands were chained behind his back every night, leaving his wrists swollen.  Mariano and others would later testify in court and name those who forced them to endure terrible conditions and treatment.

Employers Cesar and Geovanni Navarrete received 12 years each in federal prison on charges of conspiracy, holding workers in involuntary servitude, and peonage.  They employed dozens of tomato pickers in Florida and South Carolina.

In the fields of Florida, farmworkers earn 45 to 50 cents for every 32-pound bucket of tomatoes they harvest.  According to the U.S. Department of Labor, farmworkers make around $10,000-$12,499 a year which places them at or below the poverty line. [1] They lack rights and benefits that workers in other industries are guaranteed by law, like the rights to overtime and to organize.  In some instances, workers labor in conditions of modern-day slavery, where they are forced through violence or threat of violence to work against their will and are not free to leave. [2]  While these cases of modern-day slavery aren’t the norm, they are the extreme end of a continuum of systemic abuse that can best be described as “sweatshop” conditions. Though most of the winter tomatoes consumed in the United States come from Florida, [3] often people are unaware of the exploitative conditions under which tomato harvesters labor.

The farmworkers’ struggle for fair wages and human rights in the fields first came to the attention of the Presbyterian Church (U.S.A.) through Florida congregations.  The congregation’s members regularly offered food and clothing to the workers so that they could meet their basic survival needs.

Congregations began to work together as partners with the farmworkers to change the very structure of the food industry that contributed to these exploitative conditions.

The Coalition of Immokalee Workers (CIW) is a community-based farmworker organization headquartered in Immokalee, Florida, with over 4,000 members.  The CIW seeks modern working conditions for farmworkers and promotes their fair treatment in accordance with national and international labor standards.  Together with the CIW, Presbyterians have begun to help reshape a food system that has been nourished on human suffering.

In this country, in this century, Mariano Lucas and others were chained, beaten, and locked in trucks simply to deliver cheap produce, not only to grocery stores and restaurants – but to you and me.

Through the Campaign for Fair Food, the Presbyterian Hunger Program helps Presbyterians work with the Coalition of Immokalee Workers to prevent slavery and end the conditions in which it flourishes.  Seven major food companies, supplied by the employers of the crew leaders, that signed fair food agreements with the Coalition of Immokalee Workers (CIW), suspended purchases from the growers who employed the crew leaders.  This incident propelled the Florida Tomato Growers Exchange, which represents over 90 percent of Florida growers, to sign a fair food agreement with the CIW in November of 2010 that is changing these egregious conditions.

1. National Agricultural Workers Survey, published by the US Department of Labor, March 2005

2. Modern-day slavery does not mean “slave-like” or “resembling slavery” – rather, it refers to conditions that meet the high standard of proof and definition of slavery under federal laws.  In fact, the Coalition of Immokalee Workers also has been involved in the discovery, investigation, and prosecution of six slavery operations in Florida since 1997 involving a total of well over 1,000 workers.  These cases have been prosecuted by the U.S. Department of Justice Civil Rights Division either under laws forbidding peonage and indentured servitude  passed just after the Civil War during Reconstruction (18 U.S.C. Sections 1581-9) or under the 2000 Victims of Trafficking and Violence Protection Act.

3. Florida’s annual tomato crop is valued at $500 million - $700 million and supplies 90 percent of the nation’s domestically grown tomatoes during the winter months (Florida Department of Agriculture and Consumer Services, March 2009)