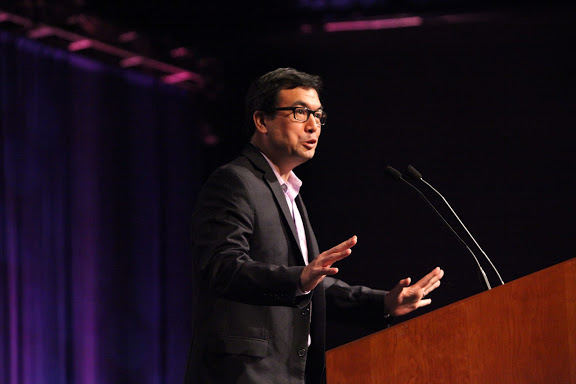 The McCormick Theological Seminary Board of trustees has elected the Rev. Frank Yamada as the school’s 10th president. He assumes office July 1.

Yamada succeeds the Rev. Cynthia M. Campbell, who is retiring.

In a press release issued by the seminary, John Anderson, the board’s chair said, “With Frank Yamada as our next President, we have a tremendous opportunity to re-imagine theological education for and by a new generation of church leaders.”

Anderson continued:  “He is tremendously enthusiastic about the future of theological education and new ways to deliver it. He is passionate about scholarship and research, is deeply committed to students, and this is a great opportunity for a new generation of leadership not just for McCormick but for the church, as well.”

Yamada, 44, who will be the first Asian American to lead a Presbyterian (U.S.A.) seminary, is currently associate professor of Hebrew Bible at McCormick and director of its Center for Asian American Ministries.

When she became president of McCormick almost 17 years ago, Campbell was the first female president of a Presbyterian (U.S.A.) seminary.

“I am honored and truly humbled to have been chosen as the tenth president of McCormick Theological Seminary,” Dr. Yamada said in the seminary’s statement announcing his election. “McCormick has a long and rich history of being on the cutting-edge of change in theological education. I believe that we will be leaders in that change. This is what we have always done. This is what we will continue to do. This is who we are.”

McCormick is “moving into an exciting new chapter and I am eager for us to step into this next stage faithfully and boldly,” Yamada said. “These are challenging times but we are poised to do something great. It is in this type of climate that God calls individuals and communities, to face the future with courage ‘for such a time as this’ (Esther 4:14).”

Prior to joining McCormick’s faculty in 2008, Yamada was associate professor at Seabury-Western Theological Seminary in Evanston, Ill. A graduate of Southern California College, he earned his Master of Divinity and Doctor of Philosophy from Princeton Theological Seminary, where he studied Hebrew Bible with an emphasis on hermeneutics, feminist theory and culturally-contextual biblical interpretation.

Yamada was an editor of and contributor to The Peoples' Bible, a cross-cultural study bible from Augsburg Fortress Press (2008) and is the author of Configurations of Rape in the Hebrew Bible: A Literary Analysis of Three Rape Narratives (Peter Lang, 2008). His writing has appeared in several collections, bible dictionaries, lectionary volumes, websites, and periodicals including The Christian Century.

He is a recognized and sought after speaker and consultant on issues of diversity and cross-cultural theological education. He has provided leadership through the Association of Theological Schools, within the academy, and in the local and national church. He is a minister of word and sacrament in the PC(USA) and a member of the Presbytery of Chicago.