Home News "Perhaps this is my season"

"Perhaps this is my season" 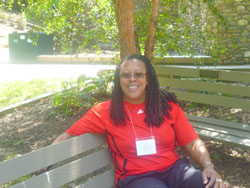 If Moses got a call, Flo Watkins got a phone call.

Watkins – the first woman and the first African American to serve as pastor of the Seigle Avenue Presbyterian Church in Charlotte, N.C. – recently found her sabbatical interrupted by a series of phone calls and email messages asking her to confirm whether or not she would be attending a seminar for African-American leaders. When she learned that the seminar was intentionally designed to strengthen and nurture the gifts of African American clergy and elders to encourage them to seek out executive and senior leadership roles at all levels of the Presbyterian Church (U.S.A.), she wondered how she was chosen to participate.

“When I found out that it was my presbytery executive who had recommended me, I said, ‘Absolutely I’m coming to do this,’” Watkins said. “I was incredibly honored. I’ve always had huge aspirations within our denomination, although I wrestle with being in the forefront or behind the scenes. I think God calls us in different seasons of our lives to different things. Perhaps this is my season.” 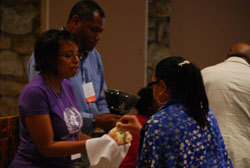 Watkins was one of nearly 20 African-American church leaders who responded to an invitation from the Rev. Dr. Rhashell Hunter, director of the Racial Ethnic and Women's Ministries/Presbyterian Women (RE&WM/PW) ministry area of the General Assembly Mission Council (GAMC), and the Rev. Dr. Lonnie Oliver, associate for African American Congregational Support “to come away to a restful place and enjoy opportunities for networking, leadership development, and wisdom sharing with other passionate African-American leaders like yourself.”

“These days are a gift to you from your church just as your leadership is a gift to the church that you serve,” Hunter told the gathering during its opening session on Sunday, August 28. “We will spend days together as African-American leaders in the church sharing wisdom, much of which we did not learn in school or in seminary yet recognize as essential for senior and executive roles in the church. You are here because someone has identified you as having particular gifts for greater leadership. We believe in your abilities and want to nurture those gifts.” 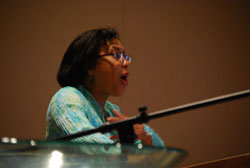 In the seminar’s opening sermon, “The Right Question,” based on passages from Esther and 1 Corinthians, Oliver addressed the culture shifts and changing leadership needs in the PC(USA), including the alarming statistic that 48% of the PC(USA)’s African-American congregations are currently without pastoral leadership.

“We’ve been challenged to revive leadership in times like these,” Oliver said, “but leadership is complex now. It’s so flexible. It requires a lot of complex qualifications, skills, opportunities, and courage. You have to be a risk taker.”

The seminar also featured powerful sermons by the Rev. Mark Lomax, founding pastor of the First African Presbyterian Church of Lithonia, Ga., and assistant professor of Homiletics at the Interdenominational Theological Center (ITC), the Rev. Sterling Morse, coordinator for Cross Cultural Ministries and Congregational Support for the GAMC, and Hunter. In their messages, they called participants to remember their past legacy and to be innovative, responsive and faithful as African American leaders in new emerging paradigms in society and in the church.

The African American Executive Leadership Seminar, held here from August 28-31, was presented by RE&WM/PW in partnership with the Center for Faith and Life at Montreat Conference Center. The seminar built upon the RE&WM/PW ministry area’s first successful partnership effort with Montreat in 2010, an innovative leadership program designed specifically for racial ethnic clergywomen. 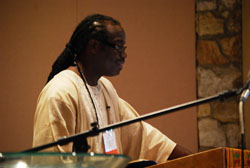 “We consider it a rich privilege to be the host site for this important African American Executive Leadership seminar,” said Merri Alexander, vice president for the Center for Faith and Life at Montreat Conference Center. “When Dr. Hunter, who has been a keynote speaker in Montreat on multiple occasions and sits on the conference center’s Master Planning Team, told me she was thinking about these kinds of leadership events, I told her how much Montreat wanted to be a partner and do everything we could to make them ‘remarkable!’ Our team is indeed grateful to be a part of this important ministry in the PC(USA).”

In bringing his own greetings to the gathering, the Rev. Albert G. “Pete” Peery, president of Montreat Conference Center, acknowledged Montreat’s difficult history of racial segregation.

“It is an honor for Montreat Conference Center to host this event and to welcome you here,” Peery said. “When I said that Montreat has been serving the church for over a hundred years, I’m well aware that it did not serve the whole church. Since the policies in the South changed in the early 1960s, we have been living into a new reality of the church and it is our commitment to become a place of welcome for all Presbyterians.” 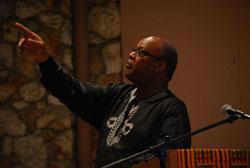 Seminar participants also took part in leading devotions during the week. The Rev. Gloria Williams led morning devotions on August 30, providing a testimony of her call into ministry as a second career clergywoman, who had a career in business prior to being called as the pastor of Second Presbyterian Church in Sumter, S.C.

The Rev. Alford Branch, pastor of Holmes Chapel Presbyterian Church in Monticello, Ark., led morning devotions on August 29 based on Exodus 4, in which Moses did not recognize the gifts that God had bestowed upon him.

“God selected Moses, equipped him and connected him to a people so that he could bring leadership to them,” Branch preached. “When God asked Moses, ’What is that in your hand,’ he did not recognize that God had already given him everything he needed. I could ask the same question of the people here, ‘What is that in your hand?’ Like Moses, we don’t recognize it, but everything that God has given us for this church, this ministry, is already in our hand.”

For those contemplating greater leadership roles in the church, Branch further emphasized that Moses started his ministry “at the bottom” by tending sheep. “It’s important to start down here in order to get up there,” he said.

Branch, like Watkins, said that he also remains “open to God’s leading.”

“I’m glad that someone sees my gifts,” Watkins said. “I believe in the power of God to transform us into what God wants us to be.”