Home News A journey for justice

A journey for justice 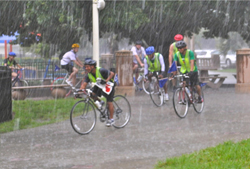 Cyclists ride into a park in Lakeland, Fla., where they hoped to speak with Publix about fair food principles. —Photo by Parrish Jones

“Biking 200 miles seemed a small price to pay for such a just cause as this,” said Bob Forbes, an elder at First Presbyterian Church of Sarasota, Fla.

Seven bicyclists took such a pilgrimage to the headquarters of Publix in Lakeland, Fla., to urge the grocery store chain to adopt fair food principles and pay tomato pickers one cent more per pound of tomatoes.

The Coalition of Immokalee Workers, a partner of the Presbyterian Hunger Program’s Campaign for Fair Food, has long been asking Publix for a hearing to discuss these issues, but has not been granted one.

Publix is one of Florida’s largest corporations and one of the largest sellers of tomatoes in the United States.

Located just 200 miles south of Lakeland, the CIW is a community-based worker organization in Florida that works for fair wages, an end to indentured servitude in the fields, better working and living conditions and stronger laws against those who violate workers’ rights.

While seven bicyclists rode the whole 200 miles, many others joined them for part of the journey. Along the way, cyclists stopped at churches to speak and enlist the support of faith communities. On Sept. 6, the final day of the pilgrimage, they rode triumphantly into a local park despite the pouring rain.

Joined by about 80 people of faith from all over Florida, the cyclists celebrated with a brunch and then journeyed on to the headquarters of Publix, where they had hoped to meet with CEO Ed Crenshaw. They wanted to remind Crenshaw of the words of Publix founder George Jenkins: “Never let making a profit stand in the way of doing the right thing.”

The group gathered and prayed on the muddy bank of a pond located on the boundary of the Publix grounds. Representatives of Florida several organizations made offerings: 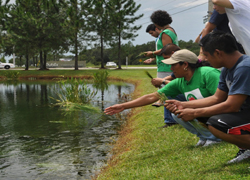 Participants spread pine needles on the water as a symbol for peace, happiness and dignity. —Photo by Parrish Jones

“As we spread the needles, pray that Mr. Crenshaw will receive the delegation,” instructed Darinel Sales, a CIW leader.

In the end, only a very brief and unproductive conversation with a Publix representative took place before a security guard ordered the group to leave.

Oscar Otzoy, a leader of CIW, expressed his disappointment that the CEO refused to meet with the CIW representatives. Having been turned away, Brian McClaren, a noted evangelical theologian, led a call and response while the participants held hands to lament the failure of Publix to listen to the cry for justice.

Before, during and after the rally, participants spoke of the importance of doing something so simple for justice as the penny a pound initiative, now accepted by a host of corporations, which has helped increase the daily incomes of pickers.

“Until I got involved with the CIW, I had never participated in a protest of any kind,” Forbes said. “The treatment of migrant workers is such a clear example of injustice you have to do something.”

Parrish W. Jones, Ph.D., lives in St. Augustine, Fla., and is a minister at large in the Presbytery of St. Augustine. He has been a mission volunteer for Frontera de Cristo and in Colombia. He speaks and writes on mission, immigration, border ministry and Colombia.