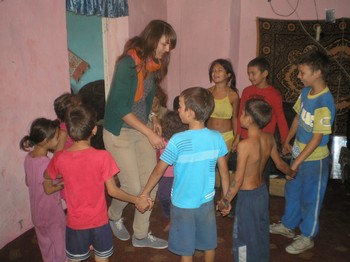 Two years ago, when the Rev. Nadia Ayoub came to this area near the Ukraine-Hungary border known as Carpath-Ukraine to serve as a Presbyterian Church (U.S.A.) mission worker with Roma people (sometimes called Gypsies), she says she was given three choices for doing her early childhood education ministry.

“The bishop [of the PC(USA)’s partner Reformed Church in Carpath-Ukraine] told me I could teach in a well-established school, or in a school in need of much improvement, or in a place where there was nothing. I chose nothing.”

Ayoub, who has also served the PC(USA) in Kazakhstan and Tajikistan, divides her time between two Roma “camps” ― really semi-permanent ghettos ― tucked into Beregovo neighborhoods. She holds classes for Roma kids ages 3-12 four days a week in the larger homes in the camp. 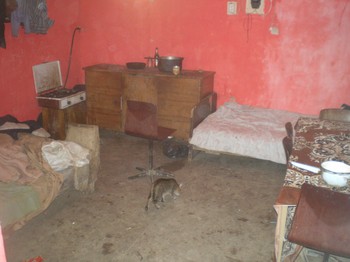 Her “classrooms” are cleared of sleeping mats and cooking supplies each day to make room for learning activities. Frequently, upwards of 20 children crowd into a 10-by-10 foot room for their lessons.

Ayoub has spent several frustrating months trying to find a separate building to house her “school.” “The Roma are all over the streets, but still they [the city authorities] don’t want to give them a place where they can be properly educated.”

Such is the plight of Roma throughout Central and Eastern Europe. An ethnic group that traces its origins to the Indian sub-continent, Roma population is estimated at between 5 and 15 million. No one knows for sure because many Roma are still nomadic and those that do settle someplace do not register because they are so discriminated against. 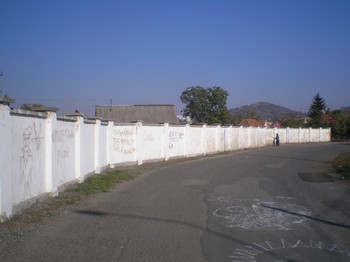 A wall, recently constructed around a Roma “camp,” is meant to keep passing motorists from getting distracted, officials say. —Jerry L. Van Marter

“There are many buildings for sale here,” Ayoub says, “but three sales in recent weeks have fallen through because neighbors objected.” Recently authorities build a tall wall around one Roma camp. “It’s on a main road,” Ayoub said. “The officials said it distracted passing drivers, but really they just want to make Roma as invisible as possible.”

Hitler’s regime in Nazi Germany marked Roma for extinction ― alongside Jews and homosexuals, among others ― and political parties, such as the Jobbiks in neighboring Hungary, have gained strength in recent years on a platform of “getting rid” of Roma.

Into this cesspool of discrimination, threats and grinding poverty and disenfranchisement, churches ― mostly in western Europe but also U.S. denominations such as the PC(USA) and the Reformed Church in America (RCA) ― have attempted to bring the gospel and much-needed social services.

PC(USA) involvement with Roma in central Europe began in the early 2000s with visits to this region by Presbyterian Frontier Fellowship founder Harold Kurtz and then Europe Area Secretary Duncan Hanson, who now holds similar responsibility for the RCA. Mission personnel have been deployed to the Czech Republic, Hungary, Ukraine and Russia to work with Roma in partnership with PC(USA) partner churches in those countries. 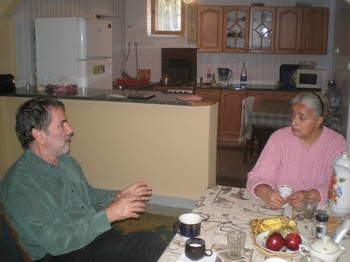 According to Presbyterian Mission’s regional liaison for central Europe, Burkhard Paetzold, the PC(USA)’s mission strategy here is self-development ― economically and socially ― and the “contextualization” of the gospel in a place where people are discriminated against at best and brutalized at worst.

Ayoub is extending this strategy into her classroom. “Roma kids all have a gift for memorization,” she says, “but one girl, Isabella, shows great ability to read and write so we’re working a lot with Isabella so she can teach the other kids how to read and write.”

Still, Ayoub longs for her own classroom building. “We had one nice classroom, but then some relatives of the people living there had some problems and just moved into it.” Most kids are pretty attentive, she adds, “but the older ones will gather outside waiting their turn and they’ll pound on the windows and doors, which makes everything more difficult.”

She also recounts an encounter with a father who repeatedly sent his son to school naked. “I insist that they wear clothes to school,” she says, “but this father told me, ‘my boy doesn’t like to wear clothes,’ but I insist.”

Roma kids in Beregovo’s camps are legally entitled to attend public schools “but in fact they cannot,” Ayoub says. “There is always an excuse to send them home ― they are too dirty, or too unhealthy, or smell too bad.”

Ayoub’s three-year appointment here concludes in July 2013, but she’s not ready to leave. “If the PC(USA) will reappoint me I want to come back ― I don’t know who will come if I don’t. I have only begun to scratch the surface.”

Ayoub tells of bringing a visiting Ukrainian social worker to the Roma camps here. “She stood with me with tears streaming down her face,” Ayoub recalls. “She said, ‘I can’t believe this exists in my own country ― in Africa, maybe yes, but not here.”