Contending for water rights in Bolivia 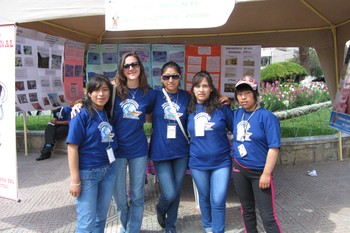 Working alongside partners in Bolivia, Presbyterian mission worker Chenoa Stock helps people speak up for their right to clean water.

It’s a right that is threatened by mining, which if done irresponsibly can contaminate both ground and surface water. Stock works with Joining Hands for Life, a Bolivian network of churches and nonprofit organizations that seeks to bring attention to environmental abuses and advocates for change.

Stock and Joining Hands for Life, which is known by its Spanish acronym UMAVIDA, are focusing on the Kori Kollo gold and silver mining operation near Oruro. “The community began to see issues with soil and water,” Stock says. “There are shortages in ground and surface water. People are experiencing health problems.” In addition, she says some animals are dying inexplicably and the reproduction cycles of livestock are abnormal.

Stock is a facilitator with the Presbyterian Hunger Program’s Joining Hands initiative, which links Presbyterians in the United States with overseas networks like UMAVIDA. Two presbyteries, Cascades and San Francisco, are partnered with UMAVIDA.

After prodding by UMAVIDA, the Bolivian government ordered an environmental audit of the area surrounding the Kori Kollo mine. It was supposed to be a 1½-year process, but delays stretched it into a three-year effort that concluded in 2012. The audit found no major environmental damage, but some experts, recruited by Joining Hands partners in the United States, concluded that the audit was inadequate. UMAVIDA continues to urge the government to force the mine’s owner, a Bolivian subsidiary of a U.S. company, to take corrective action.

“We’re not against mining,” Stock says. “Mining is a huge part of Bolivia’s economy. We are asking for accountability and environmental justice.”

As she looks toward Bolivia’s environmental future, Stock is heartened by the positive response of young people who attend UMAVIDA’s “water schools,” where information about water sources is shared and the need to preserve these sources is emphasized. She says she can sense that the young people see the need to make changes “one action at a time.”

For Stock, the work of UMAVIDA is a quest to fulfill Jesus’ prayer that God’s will be done on Earth as it is in heaven. “It is a struggle to create a world where there is abundant life for all—people, land, water, and all beings,” Stock says. “It is a struggle for justice that can be achieved only when we are bound together by our Christian hearts and kindred minds, proclaiming our faith in solidarity.”