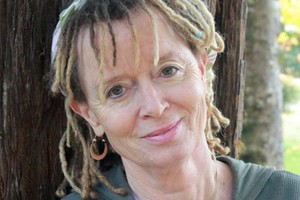 Anne Lamott ― a member of St. Andrew Presbyterian Church in Marin City, Calif. ― is the most honest and self-critical author I know, and so I was predisposed to find her new slim book on prayer ― Help, Thanks, Wow: Three Essential Prayers ― a helpful gem.

What I wasn’t expecting was how easily and briefly this remarkable writer can lay out how rich a life of prayer can be ― and how well she seems to know me, and maybe you, too.

The book is in three main sections, each an essay on particular circumstances for prayer.

“Help” is first because it’s what Lamott calls a “good, honest prayer,” one that “remind(s) me that I am not in charge, that I cannot fix anything, and that I open myself to being helped by something, some force, some friends, some something.”

“Thanks” is the prayer that spurs Lamott to action. “Gratitude begins in our hearts and then dovetails into behavior,” she writes. “It almost always makes you willing to be of service, which is where the joy resides.” The circle of family and friends ― “the lifesaving gift that your pit crew of people has been for you” ― is often at the heart of the “thanks” prayer.

“The marvel is only partly that somehow you lured them into your web 20 years ago, 40 years ago, and they totally stuck with you,” she writes. “The more astonishing thing is that these greatest of all possible people feel the same way about you ― horrible, grim, self-obsessed you.”

I’ve often found that remarkable. If you only knew me, I’ve thought more than once about some pretty terrific friends, you’d spend your time with someone you deserve and not me.

“Wow” is the prayer to use when words fail us ― “when we are stunned to the place beyond words,” according to Lamott.

There are “lowercase wows,” like crawling between clean sheets after a hard day, making you feel like “the best sandwich ever. You’re being taken care of from the top and the bottom, with not a crumb or a lump or a wrinkle. Wow: you can’t believe you felt so low and lonely till you thought to clean the sheets.”

And there are “uppercase wows,” such as when we first learned what magnificent and gargantuan creatures the dinosaurs really were. “When you’re a little kid, that’s about as trippy as science gets: These huge creatures once roamed the earth, and now are fossils; everything, from stegosaurus to your granddad, appears, roams the earth for a little while, and then vanishes. Wow.”

We end our prayers with an “amen,” and that’s how Lamott draws her 102-page book to a close. “I pray not to be such a whiny, self-obsessed baby, and give thanks that I am not quite as bad as I used to be (talk about miracles),” Lamott writes. “…It turns out that I’m less of a brat than before, and I hit the reset button much sooner, shake it off and get my sense of humor back. That we and those we love have lightened up over the years is one of the most astonishing sights we will ever witness.”

Help, Thanks, Wow will fit easily into a Christmas stocking, but read it before you give it away. Lamott says she prays constantly “between bouts of trying to live life on life’s terms.” Now that we know how she does it, we can do the same.

Mike Ferguson is a ruling elder at the United Presbyterian Church of Lone Tree (Iowa), a reporter for “The Muscatine Journal”― the newspaper where Mark Twain got his start ― editor of “Out and About,” the enewsletter of the Presbytery of East Iowa, and a frequent contributor to Presbyterian News Service.