A tribute to Presbyterian-friendly Dave Brubeck 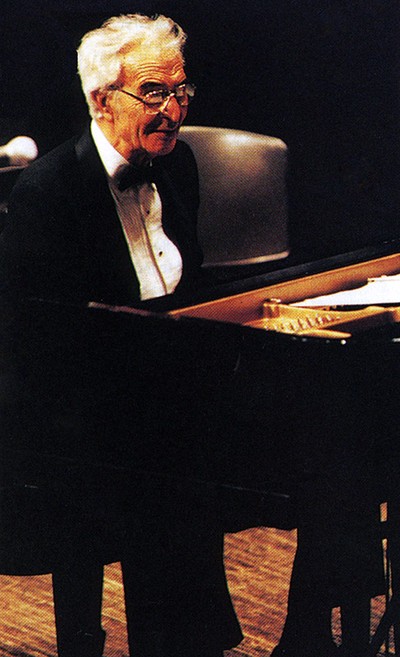 Dave Brubeck, in concert at the 1997 General Assembly. —Courtesy of Presbyterians Today

Jazz legend Dave Brubeck died Dec. 5, the day before his 92nd birthday. His impact on the world of music in general and jazz in particular was profound, marked by the front-page announcement of his death in newspapers all over the world. Along with millions of others, I was a Dave Brubeck fan, a life-long lover of his music since I first heard it in the late ‘50s, and, I am honored to say, a friend.

Brubeck changed jazz by his “cool” sound produced in collaboration with alto saxophonist, Paul Desmond playing counterpoint to Brubeck’s piano, by his innovative use of unusual rhythms, and by capturing the imagination of a whole generation of college students in the ’50s and ’60s. In the process his 33rpm record, “Time Out,” became the first jazz album to sell more than a million copies.

Following a State Department tour to India and the Middle East, Brubeck began to experiment with unusual rhythmic structures in his jazz composition and playing. His signature piece, “Take Five,” perhaps the most popular jazz single ever, broke out of the standard jazz genre and employed an innovative 5\4, a five beat measure instead of the standard 4. Later, “Blue Rondo a la Turk” was written in a surprising and engaging 9/8. Brubeck once suggested that children sing naturally in 5/4 rhythm and wrote one of his liveliest Christmas pieces, “God’s Love Made Visible,” in that time.

Brubeck’s musical and personal life gradually found religious expression. His father, a California cattle rancher, was an avowed atheist. His mother was a Christian Scientist who directed the choir in a local Presbyterian Church, so Brubeck’s earliest religious exposure was to Presbyterianism. His first professional job was playing the organ at a local Reformatory Chapel at the age of fourteen. He remembered favorite hymns sung by the inmates at Sunday services, “Just as I Am” and “The Old Rugged Cross.”

In the middle of his critically acclaimed career as a jazz musician and composer, religious themes and motifs began to appear in Brubeck’s music. While composing a complete Mass, “To Hope,” he was so struck by the beauty and power of the liturgy that he joined the Roman Catholic Church and for the rest of his life was a regular worshipper in his home parish church, Our Lady of Fatima in Wilton, Connecticut. His funeral was celebrated in that church Dec. 12 and included some of Brubeck’s sacred music compositions including, “The Desert and the Parched Land,” “Psalm 23” and the Gloria from “To Hope.”

I first met Dave Brubeck when the church I was serving, The Fourth Presbyterian Church of Chicago, invited him to play during the annual Festival of the Arts. Brubeck agreed and he and his quartet played a magnificent concert of favorite jazz and sacred music with the Morning Choir singing the choral numbers with the quartet.

He returned to play at the church several times and during one of those early visits Brubeck had a minor heart incident and was admitted to Northwestern Memorial Hospital for observation on the very day of the concert. It was my duty that evening to greet a sanctuary full of people who had purchased tickets to hear Dave Brubeck and announce that the Brubeck Quartet was a trio for that performance, without Brubeck himself. There was a little grumbling but the trio presented a great concert of Brubeck music.

I asked Brubeck’s manager and conductor, Russell Gloyd, who later married a Fourth Church Choir member and became a faithful church member himself, if a visit in to Brubeck in the hospital would be appropriate. Russell assured me that a pastoral call would not only be appropriate but that Brubeck, a believer and a man of faith, would be grateful.

So, with some fear and trepidation and a bit of awe at the great jazz artist himself, I visited him in Intensive Care. He was gracious, seemingly grateful for the visit as Russell predicted, and we talked about music and faith, and when I asked him if I could pray he immediately agreed. We prayed, and thereafter he began to call me his pastor.

Every time he played in Chicago, we were invited to attend the concert as his guests and to visit back stage afterward. Without fail he would greet me with a lively, “It’s my pastor!” He telephoned once to discuss appropriate scripture passages for future compositions and one of our dearest memories is of a lunch Sue and I shared with Brubeck and his wife, Iola. In addition to being the mother of their six children, Iola was a trusted business consultant and the author of many of the lyrics to his sacred music. We talked, of course, about our six children and theirs and the joys and challenges of parenting, and we talked about music, church and faith.

At the end of my term as Moderator of the 208th General Assembly (1996) of the Presbyterian Church (U.S.A.), I inquired of Russell Gloyd and Brubeck about the possibility that the Brubeck Quartet might play for the 209th General Assembly (1997) meeting in Syracuse. To my absolute delight, they accepted the invitation and played a wonderful evening program for the General Assembly commissioners and guests. With a local choral group Brubeck presented several sacred works, “All My Hope” from the Mass, To Hope; “God’s Love Made Visible” from Fiesta de la Posada; and a powerful “The Peace of Jerusalem” from The Gates of Justice. It was a memorable evening for which I, and all those privileged to be present, will be forever grateful.

In every age religion and the arts have been partners and collaborators in the great vocation of expressing human wonder and awe at the mystery of human existence, and giving voice to adoration, praise, and gratitude to God: from the ancient poets who wrote:

Sing to the Lord, bless his name...

Then shall all the trees of the forest sing for joy,

to J.S. Bach, whose “Jesu, Joy of Man’s Desiring” occasionally emerged in the middle of a Brubeck improvisation, to Dave Brubeck himself, who is now part of the music department, instrumental division, in the great company of heaven.