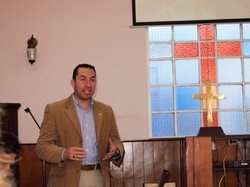 Rabbi Richard Gamboa, a member of an interfaith peace group in Bogotá, says that peacemaking is about disarming hearts as well as hands. —The Rev. Shannan Vance-Ocampo

In the past, interfaith work in Colombia has mostly involved top-level clergy, not their congregants at the base, says a peace group here.

But Tuesaquillo Territorio de Paz (Territory of Peace, or TTP) is working to change that model. Based in Tuesaquillo, one of 20 districts in the capital city of Bogotá, TTP is an interfaith, secular group dedicated to peace in the midst of Colombia’s decades-long armed internal conflict. Participants range from the local mayor’s office and academic institutions to many faith groups, including Presbyterians, Catholics, Muslims, Jews, Buddhists and Mennonites.

“We are very excited,” said Rabbi Richard Gamboa, speaking at La Paz de Dios Presbyterian Church here Feb. 11. “We want to clamor for peace from the base for a negotiated end to this conflict.”

TTP began when the mayor of Tuesaquillo gathered local faith groups to discuss their shared values. They all agreed that peace was No. 1. They decided to work together to make Tuesaquillo an engine for peace in Bogotá and throughout Colombia.

TTP’s ideological platform is made up of nine principles:

In the area of women’s rights, TTP has become a major player in local society, said Magnolia Agudilo Velasquez, a member of TTP who works with the local human rights council.

“Peace is talked about in high levels of government and constitutions, but this group wants to be a local expression of peace,” she said.

True peace involves more than just a ceasefire, Agudilo said. Peacemaking is an attempt to close large breaches between people, which is one reason why women are a central focus of TTP.

In Colombia, women are not always treated the same as men, and violence against women is a huge problem. So TTP works to put forward a new vision for women — to show them as “transformers of society, builders of peace, constructors of wealth,” Agudilo said.

Last year, TTP sponsored a public recognition of women peacemakers in order to highlight the ways that women from all levels of society can work for peace.

As an interfaith group, the relationship between religion and peace is another focus of TTP. It hosts a three-month, weekend course at a local university where different religious leaders speak about peace in their traditions. The Rev. Richard Williams, a PC(USA) mission co-worker in Colombia, led the discussion on the Reformed approach to peace.

TTP also hopes to start “schools of peace” throughout the country that will educate students about peace processes.

There have been various reactions to TTP’s model of interfaith peacemaking. Some faith groups admire the work very much while others don’t believe that different religions should work together. And the news media isn’t very interested in TTP because it focuses on peace, not fighting, Gamboa said.

But TTP’s efforts continue to grow and get results.

“The work ends up being more like photo ops in other instances,” said Fernando Luis san Miguel, a participant in TTP and the son of a Presbyterian pastor here. “This is real work.”

The above comments were translated from Spanish by PC(USA) mission co-worker the Rev. Mamie Broadhurst.

This is one of a series of stories gathered on a Presbyterian Peace Fellowship delegation to Colombia Feb. 3-13. To learn more about PPF and its work in Colombia, including the Colombia Accompaniment Program, click here.