Home News Docket in your pocket

Docket in your pocket

Stated clerk unveils compact edition of the Form of Government 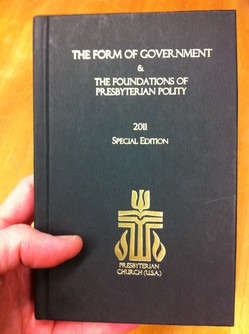 The “2011 Special Edition” of the PC(USA)’s new Form of Government is pocket-sized. —Jerry L. Van Marter

The technological age has brought us many pocket-sized wonders: telephones, cameras, computers, music-players.

Now, for Presbyterians, there’s a new mini-wonder: a pocket-sized “2011 Special Edition” of the denomination’s new Form of Government.

“We believe this is a transformative Form of Government,” says General Assembly Stated Clerk the Rev. Gradye Parsons, speaking of the new landmark constitutional document ratified last year. “So it deserves special attention.”

The compact edition includes the new Form of Government and its companion “Foundations of Presbyterian Polity.” With a black cover and gold embossed lettering, it measures just 4 x 6 x 5/8 inches ― almost identical in size to a Presbyterian Book of Christian Order published in 1908.

“Polity-wise, we really are getting back to what we used to be,” Parsons notes.

The compact volume is admittedly “commemorative,” Parsons says. “We know it’ll be out of date by the time the next Assembly approves the next batch of amendments.

“But this book represents a special moment in the history of the church.”

Parsons believes the pocket volume will be used as a gift for “those who are or who have been key leaders in the church, such as retiring presbytery moderators or clerks.”

Copies of the limited run of the book are available for $20 at the Presbyterian Church (U.S.A.)’s online store.