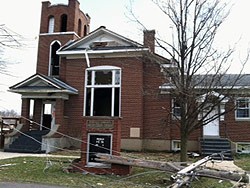 On Friday, March 2, Henryville Community Presbyterian Church was badly damaged by a tornado that blew out windows and tore the roof off the building. It was one of a number of storms that struck the Midwest during that week, wreaking much havoc and destruction.

The church fared better than some of the other homes and business in town, many of which were completely destroyed.

For two days, only residents and emergency personnel were allowed into the area and with power mostly out, getting in touch with friends and neighbors was nearly impossible for those both in and out of town.

Louisville Presbyterian Theological Seminary student Alex Becker, who preaches three Sundays a month at Henryville Community but does not live in town, raced to help his people that Friday only to be turned away by emergency personnel.

“I told him he had to go back,” says Susan McGhee, executive presbyter for the Ohio Valley Presbytery. “I told him it’s not safe and they won’t let you in there anyhow. He did what I asked him to do but his first thought was for those people.”

Becker finally got into the area on Sunday when he and McGhee led worship for the members of Henryville Community and nearby Mt. Lebanon Presbyterian Church in a joint service held at Mt. Lebanon’s undamaged building.

“We started the service late because people were talking and the passing of the peace went on and on and no one felt like stopping it. And it was wonderful because people hadn’t seen each other. People wanted to know how everyone else was doing and people got that chance at church,” says Becker.

Though some lost their homes, no church members were killed in the storm. Not only did they need to see each other and find out if their neighbors were all right, Becker says, it also met a need to feel some sort of connection with God.

Becker preached that morning, confirming that connection and also giving people a message of faith and hopefulness for the recovery that lay ahead.

“That’s part of the offering. We talk about tithes and offerings and everyone thinks about giving money,” Becker says, “but in this case it’s also about giving our time to helping other people if you weren’t quite as damaged and showing the world what Christians can do for each other.”

They seem to have taken his words to heart. People have “come out of the woodwork” to take care of the needs of others. Becker says the people of Henryville have approached the work of cleanup and recovery with great spirit and he’s amazed by how much has already been accomplished.

“As far as what’s happened with the tornado, they’re grateful more than anything for what didn’t happen,” he says. “The fact that the church is still standing, the fact that they are going to be able to repair it, the fact the people who are working on it have been working so hard and getting things done so quickly.”

Neither Henryville Community nor Mt. Lebanon have installed pastors right now, but Becker says the clerks of session and the memberships as a whole have really stepped up to get everyone together and take care of not only the church members but the community.

For McGhee, it affirms what a church really is.

“The church building is the church’s house. The church’s house can be destroyed but the church does not get destroyed,” she says. “Those people are strong and marvelous and I am in such awe to see how they are reaching out to each other, their community, and loving one another.”

Ohio Valley Presbytery has a relief fund and has received funds from Presbyterian Disaster Assistance to help the people of Henryville and other communities in Indiana and Kentucky devastated by the storms with recovery.

Other relief organizations like the Red Cross and Salvation Army have also arrived so McGhee says they are assessing needs right now, with a focus especially on those needs that might fall through the cracks otherwise.

“We are concerned with long term recovery. We’re also concerned with the spiritual and emotional needs of these folks,” McGhee says. “We’re aware of how this has rocked people’s worlds and that that recovery is also so important. The fact that we were able to in worship together on Sunday was a step toward addressing those spiritual needs.”

Toni Montgomery is a free-lance writer and frequent contributor to Presbyterian News Service in Statesville, N.C., where she also serves as church secretary for First Presbyterian Church of Statesville.