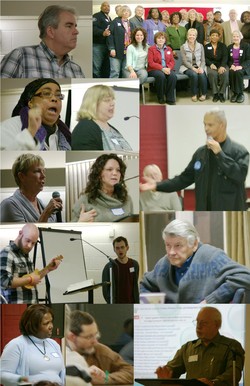 The bucolic setting of the Stony Point Conference Center an hour north of Manhattan stands in sharp contrast to the fabled Sing Sing Correctional Facility just seven miles away.

Gathered at Stony Point Feb. 16-18 was a clutch of Presbyterians committed to prison reform, gathered to discuss, among other issues, the growing trend toward the privatization of U.S. prisons.

Though the overall U.S. prison population has decreased since 2008 ― some 60,000 inmates are released each year ― at the end of 2010, the U.S. Justice Department shows that roughly one in every 32 people are incarcerated. That’s some 2.3 million Americans ― including 3,200 people on death row ― behind bars at the county, state and federal level.

Since at least 1958, the Presbyterian Church (U.S.A.) has consistently called for the end of the death penalty. For almost as long, the denomination has championed criminal justice system reform, calling for “restorative” justice rather than a retributive justice system. The most recent broad policy statement was approved by the General Assembly in 2003.

About three years ago, Ruling Elder Annie Rawlings, then serving the Presbytery of New York City as interim associate executive presbyter for social witness, noticed that Criminal Justice Sunday was no longer listed on the denomination’s planning calendar.

Out of her quest to get the day restored came a joint overture to the 2010 General Assembly from New York City and Hudson River presbyteries to add national staff dedicated to the PC(USA)’s advocacy efforts around criminal justice reform.

Budgetary constraints precluded adding staff, but the Assembly suggested an alternate approach: utilize the already-developed and in-place networks of the Presbyterian Health, Education and Welfare Association (PHEWA) to “… convene a gathering of interested individuals … to consider and propose the creation of a PHEWA network on criminal justice for education and advocacy ministries” and report back to this July’s 220th GA.

For the Rev. Trina Zelle, PHEWA’s national organizer and executive director, and for co-organizer Rawlings, the chief goal of this consultation was to prepare a “referral in process” (progress report) for the Assembly.

Also on the table for PHEWA’s team, which includes its vice-president, the Rev. John Scotland, and national staffer, Susan Stack, is countering a solicitation recently mailed to 48 state governors by Corrections Corporation of America (CCA), one of the leading operators of privatized prisons in the country.

The consultation drafted a communiqué urging these governors to avoid the allegedly cost-effective move of privatizing some, if not all of their facilities.

Three young former classmates at Pittsburgh Theological Seminary, were also present: the Rev. Doug Holmes, pastor of First Presbyterian, Albion, NY; the Rev. Steve Werth, pastor of Appleby Manor Memorial and Crooked Creek Presbyterian congregations in Ford City, PA; and Caitlin Rohrer who will soon become director of the pre-release HOPE Program at the Allegheny County Jail. There she will manage the rehabilitative interfaith program and serve as a chaplain.

Taking a SWOT at “The System”

Reminding everyone that “PHEWA has a 50-year mission tradition of efforts trying to get the church to become ‘passionate,’” Scotland cautioned the group: “Your efforts must be smart. You must avoid the trap of a ‘Ready! Fire! Aim!’ effort that ultimately misses the mark.”

Thus, a quick refresher on how to ‘SWOT the opposition’:

“The only way to end the monster (of a retributive justice system) is if the church stops it,” she said.

Gonzalez’ opening presentation was a fitting complement to the concluding charge to “Get your elevator speech ready” from grassrootsleadership.org’s Gail Tyree. She’s a Soros Justice Fellow from South Haven, Miss., whose activism grows out of her passion as the mother of an incarcerated son.

“Can you state your case in 35 seconds?” she challenged. “In the time it takes for an elevator to go the 4th or 5th floor (can you make your point) so that your fellow passengers ride past their floor to hear your full position?”

Tyree’s remarks were underscored by her recent success in Tallahassee, where the Florida legislature voted not to privatize 29 of the state’s approximately 90 prisons.

Also presenting was Alex Friedmann, an associate editor with Prison Legal News who began writing for the publication while incarcerated, and Bob Sloan, an independent prison industry consultant who contributes to DailyKos.com.

Altogether, the two men have spent nearly two decades behind bars, some within the privatized prison system.

In separate presentations, both decried the privatization of prisons as inherently dehumanizing. A privatizing company like CCA or Geo Group dangles dollars in front of a state to buy up its aging prison properties — mostly minimum- and medium-security facilities. States often must sign a 20-year contract guaranteeing a 90 percent occupancy rate in the prisons.

This can be an especially attractive concept for states with severe budgetary issues.

The privatizing of prisons is designed to save on labor costs; CCA claims these account for roughly 70 percent of the overall operating costs of a prison across what’s termed its “useful life,” Friedmann and Sloan said.

Both men said the privatizing prison firms are the only winners in these deals. Among their first acts: replacing union-represented prison staff with lesser-paid non-union staff.  The lower salaries lead to a high turnover rate among staff who find it hard to make ends meet, the men said.

Their research also indicates that prisoner rehabilitative programs are almost always sacrificed for the sake of profits so that inmates have more available hours to work in prison-run manufacturing plants. But prisoners’ earnings from these manufacturing jobs are almost always less than those in non-privatized facilities. Plus, Friedmann and Sloan said, these wages are often subject to “nickel-dime” charges such as daily room and board.

Additionally, for many privatized prisons to maintain their contractual 90 percent occupancy rate, inmates are shipped to facilities further away from their homes and families; sometimes this means being shipped to another state.

It’s a scenario that tends to heat up underlying tensions endemic to prison life, resulting in a higher ratio of escape attempts from privatized institutions, Friedmann and Sloan said.

‘A human connection has to be made’

“To be a religious leader is to appeal to a higher law in a higher court.”

The words belong to the Rev. Don Shriver, emeritus president of New York’s Union Theological Seminary and an expert on justice and reconciliation. On a panel with his wife, Peggy, an expert on prison reform; and Gail King and Laura Markel Downton, representing the General Board of Church and Society of the United Methodist Church; Shriver opened with a story from New Zealand about restorative justice.

A young man broke into a car one day, stealing a digital camera. When he was caught, instead of jail, the prosecutor, the defense and the victims worked out a plan with the judge whereby the thief would work to replace the stolen camera and the damage to the car. While nothing could replace the loss of the family reunion photographs in the camera, there was a “save:” the young man’s future.

While Don Shriver acknowledged that this was just one incident, “Transforming the community may be a direct stimulus to transforming the justice system,” he said.

For Peggy Shriver, “Restorative justice … could lead to some remarkable breakthroughs.”

She pointed to an example closer to home, from the Oakland (Calif.) Unified School System, which discusses events with accused perpetrators. In one instance, a young man had burglarized two homes because he had gotten his girlfriend pregnant. When guilt overcame him, he “manned up” and went back to return the stolen money. One of the victims was impressed, giving the youth money to take parenting classes.

Ask lay pastor Hans Hallundbaek of Hudson River Presbytery, who’s been working inside Sing Sing since 1995. He will answer “very successful” then introduce you to Theo Harris, who turns 63 this spring; for 40 of these years he has been incarcerated.

“It is an absolute privilege to be standing here today,” said Harris, who has seven felony convictions and was last arrested on his 53rd birthday in 2002. “God has His hand on me.”

It was only during this last stretch that Harris learned something about himself: “I was addicted to prison through a drug addiction.”

Thinking he was headed toward a life sentence, Harris ended up getting treatment for and controlling his addiction.

Despite living in an era when many prisoner education programs are being dropped due to funding cuts — “What genius took education out of the prisons?” Harris asked. “You have people going in with no education, coming out with no education, doing the only thing they know when they come out of prison [is] committing more crime.” — he’s earned a B.A. from Syracuse, his M.A. from The State University at Buffalo and an M.Div. from NY Theological Seminary all while incarcerated.

He’s also written A Wretch Like Me: Memoirs of a Felon, due from Tate Publishing this December.

Yet, despite all these accomplishments, Harris’ biggest ― his most restorative ― is occurring during this weekend.

“There are people who recognize that a human connection has to be made,” he said.