Home News Ending child malnutrition in Kenya, one sprinkle at a time

Ending child malnutrition in Kenya, one sprinkle at a time 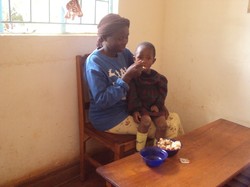 Working in collaboration with the Kenyan Ministry of Health, CWS is now distributing packets of vitamin and mineral-rich powder supplements to maternal and child health clinics. —courtesy of Church World Service

In a country facing some of the highest malnutrition rates in more than a decade, global humanitarian agency Church World Service (CWS) announced that it has launched a nutritional supplement initiative aimed at reaching thousands of malnourished children in eastern Kenya whose physical and mental development and health are permanently at risk.

Working in collaboration with the Kenyan Ministry of Health, CWS is now distributing packets of vitamin and mineral-rich powder supplements to maternal and child health clinics in Mwingi and Kwale districts.

The two districts had been treating hundreds of malnourished children on a monthly basis but previously had no access to appropriate micronutrient supplements, according to Sammy Mutua, emergency coordinator for CWS Africa.

The effort falls in the light of recent published reports indicating that as many as 385,000 children under five are malnourished in Kenya.

Mutua said the Mwingi and Kwale clinics are distributing to mothers of malnourished children packets of a multiple micronutrient-powder (MNP) of essential vitamins and minerals, including essential vitamin A, the B vitamins, iron, iodine and zinc, with instructions to sprinkle the powders onto cooked foods such as rice and porridge.

The project will initially reach 3,000 children between the ages of 6 months and 2 years, and the clinics are monitoring each child's health.

“This is a very critical contribution to their health,” Mutua says.

This month, Suryantan is visiting district health centers participating in the micronutrient powder supplementation initiative to conduct a progress survey.

“Our dream is to scale up the intervention to reach more small children and mothers, and to strengthen our partnership with government and private sector participants like the H. J. Heinz Foundation and Heinz ABC,” she said. Heinz ABC produces Nurturemate brand micronutrient powders as part of the global Heinz Micronutrient Campaign.

“This intervention in eastern Kenya is a welcome addition to our emergency response and long term development work in Africa, to help to build people’s health and resilience,” Suryantan said.

Kenya is the second country where CWS is using multi-micronutrient supplements to fight child malnutrition. Since 2008, in partnership with the H.J. Heinz Company Foundation, CWS has provided vitamin and mineral supplements and health education to the caregivers of 20,000 young children in regions of Indonesia.

By 2009, early childhood anemia was reduced by between 21 and 32 percent in the Church World Service Indonesia project areas, according to a follow-up study conducted by the agency.

In the adjacent nation of Timor-Leste, CWS recently collaborated with Helen Keller International in formative research that included a micronutrient powder usability trial with 45 mothers-child pairs together. A report on the research, which was funded by UNICEF and the Timor-Leste Ministry of Health Nutrition Department, is expected to be available soon.

“Malnutrition is especially harmful to young children within the first thousand days of life, whose bodies are building organs, cognitive development and immune systems to last a lifetime,” says Suryantan. “Research shows that in these critical, earliest months, deficiencies of vitamins and minerals can lead to irreversible consequences to child health, growth and development.”

Reducing anemia and iodine, vitamin A and zinc deficiencies with micronutrient powders is a very cost-effective way to help children, Suryantan adds.

One single-serve packet of micronutrient powder contains 14 vitamins and minerals commonly found in fortified foods such as breakfast cereals and costs approximately 3 U.S. cents to produce.

Says Suryantan, “Anemia is often a sign of nutritional deficiencies, mostly iron deficiency, that in children can impair growth, motor and mental development and often leads to other illnesses.”

Maurice A. Bloem, head of global programs for CWS, argues that humanitarian agencies must address the nutritional needs of children at an early age in order to have a lasting impact. There is a growing recognition that micronutrient supplements should be used in areas where families are not able to eat enough nutritious food, Bloem says.

“While CWS does not consider micronutrients to be a magic bullet in the fight against hunger, they are an important tool,” says Bloem.

One of CWS’ partners is the Presbyterian Church (U.S.A.).