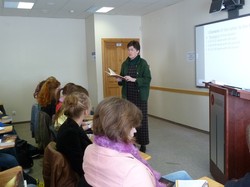 For days after he enrolled in a required Bible course at LCC International University, Georgij sat in the class and scowled indignantly at his professor, Presbyterian mission co-worker Jane Holslag.

He had come to the Christian school in Klaipeda, Lithuania, because he wanted the educational opportunities it offers. However, he didn’t want anything to do with the Christian faith the university considers foundational to its mission.

His behavior was so rude that Holslag called him aside and demanded that he start showing her respect. “You’ve got a good mind,” she told him. “Why don’t you take the high road and outshine these students who are Christians?”

After the conversation, Georgij began to engage his studies with enthusiasm. “I heard him teaching Romans 3 to some other students one day,” Holslag says. “He was giving a good discourse on Paul’s thought.”

Georgij, who has now graduated, apparently began to reconsider the merits of the Christian faith. He became a regular at Christian events. “What’s God doing?” Holslag asked? “I don’t know but we had a new relationship and he began to smile more.”

Holslag, now in her 11th year of teaching at LCC, encourages students to approach the Bible with an open mind and to use scholarly tools to enhance their understanding. She doesn’t insist that students believe the message of the Bible, but she says the biblical witness can change their minds.

“God’s word doesn’t return void,” says Holslag, referring to Isaiah 55:11. “I believe the word of God speaks for itself.”

The university mostly serves students mostly from Lithuania and nearby countries where totalitarian regimes suppressed Christianity for decades. Holslag says that only about 20 percent of LCC’s students come from Christian homes.

The university offers a liberal arts education taught in the English. The language of instruction is a drawing card for students seeking to improve their skills at what has become the international language of commerce and technology.

LCC, founded in 1991 in the wake of communism’s fall, seeks to train students for leadership in their home countries. In addition to Holslag, two other Presbyterian mission workers, Eric and Becky Hinderliter, serve at LCC. “Everything we do is to help students integrate learning into their lives,” Holslag says. On campus there is a strong emphasis on the Bible, moral philosophy, and a Christian worldview. A variety of Christian traditions are represented on the faculty and in the student body.

Depressed economies can discourage students from returning to their home countries when they graduate, Holslag says. Yet LCC continues to emphasize they are needed back home. One student, Anastasia, told Holslag that she had thought about seeking better economic opportunities in a place other than her native Ukraine. “This place has helped me to question those values,” she told Holslag. “I was wavering, but now I am going home because I supposed to go home.”