Couple honored for providing 2,500 free showers to those in need 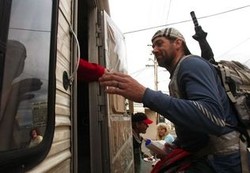 Jason Felton, of Everett, enters Frank Fargo's trailer on his way to take a shower outside the First Presbyterian Church. —Sarah Weiser, The Herald

Outside, there’s a chill in the evening air. Inside the trailer, it’s warm and steamy. Clean scents of soap and shampoo fill the cramped space.

“When we get here, there are usually three or four people waiting ― an hour early,” said Frank Fargo, whose custom trailer makes his ministry possible.

Fargo, 59, and his wife, Louise, were honored recently at Everett’s First Presbyterian Church. In a presentation during the church’s “Dinner at the Bell,” they were recognized for providing 2,500 showers to people in need.

“Tonight is special,” said Shirley Morrow, a church member and organizer of the free Wednesday night community meals, where all are welcome. “Frank and Louise have been coming to this church for four years to give showers. Tonight they start on the next 2,500,” she said.

A plaque given to the Clearview-area couple thanked them for what they call “Shower to the People.”

During the dinners, Frank Fargo hands out reusable tickets for showers. Each Wednesday evening, he parks his trailer in the alley behind the church, which is on Rockefeller Avenue near the Snohomish County Courthouse.

He offers as many as 15 showers after the evening meal. Some people take 10 minutes or longer in the trailer, which is customized with a regular-size stall shower, a curtained-off dressing area and a skylight. Patient and easygoing, the Fargos wait ― sometimes until 9 p.m. ― while people with nowhere else to shower take their turns.

Frank Fargo stands outside. His wife sits inside the trailer handing out towels and other items. Along with showers, they give away new socks and underwear.

“It’s easier to find meals than showers,” said 20-year-old Eli Calderon, adding that he lives on the streets.

“We appreciate what he does out here. He’s a good man,” Russ Roderick, 42, said as he waited and chatted in the group outside.

Also in line was Elaine Wolf, 42, who said she lost a home after separating from her husband.

“Bless their hearts,” Wolf said of the Fargos. “It's amazing ― endless hot water. Just knowing people care is enough. It’s God’s work for sure,” she said. 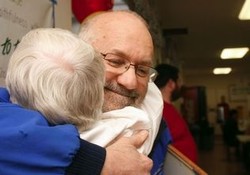 Frank Fargo, who offers free showers out of his trailer behind the First Presbyterian Church in Everett, gets a hug from Lois Sugars, a friend and fellow churchgoer, after he was honored for providing his 2,500th shower. —Sarah Weiser, The Herald

Along with First Presbyterian at 5:30 p.m. Wednesdays, the shower trailer stops weekly at Trinity Lutheran Church in Lynnwood. A Neighbors in Need breakfast is served there at 8:30 a.m. Saturdays.

Frank Fargo was inspired by a book he read. Under the Overpass: A Journey of Faith on the Streets of America, by Mike Yankoski, is the true story of a man who followed his Christian faith by living like a homeless person for five months. Fargo was struck by the author’s descriptions of going without showers.

Deciding to make a mission of it, Fargo looked for a used trailer with room to install the full-size shower, and clearance underneath for water tanks. He carries 150 gallons, but there’s no danger of running out. The trailer has an instant water heater, and Fargo hooks up a hose from the church.

Fargo juggles charity efforts with his day job. In addition to providing showers, he helps a youth group at Cascade View Presbyterian. He commutes to King County, where he works for the Port of Seattle.

The Fargos get some donations at their church, but mostly buy the new socks and underwear. They estimate that each shower costs them about $5, with fuel costs and clothing they provide.

Inside the trailer, one wall has stacks of folded towels. There are travel-size shampoos and other toiletries. They also gather used coats and other clothes, which they give freely to people waiting outside.

“When he wanted to do this, I told him they can’t put the same old clothes back on,” Louise Fargo said.

“Frank meets all of these people exactly where they are,” said Lois Sugars, who attends Cascade View Presbyterian with the Fargos. “This is a blessing. Frank and Louise are wonderful,” said the Rev. Alan Dorway, pastor of Everett’s First Presbyterian Church.

Hours after the trailer arrived, a few people still waited to shower before walking off into the night. Frank Fargo stood by, still chatting, still smiling.

“You have to give back if you’ve got it,” he said.