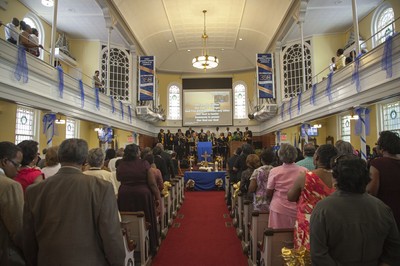 In 1662, a group of colonists ― primarily from Halifax, West Yorkshire, England, who had settled in what would become Jamaica, Queens ― began holding worship services in a public meeting house. The congregation was the beginning of First Presbyterian Church in Jamaica.

In 2012, First Presbyterian Church in Jamaica is celebrating its 350th anniversary, making it the longest continually serving Presbyterian church in the United States.  Today, it is a diverse congregation serving a multicultural urban community, but the historic 1813 sanctuary, only the second one used by the congregation and still in use today, serves as a visible reminder of the church’s long heritage.

Celebration events included not just church members but friends, supporters, and the surrounding community and took place throughout the first half of the year. Festivities kicked off in January and included a Food and Fashion Festival, Street Fair, Faith In Action Community Service Day, celebratory worship service June 10th, and wrapped up with an Anniversary Gala dinner on June 22nd.

“Part of the goal for church 350th campaign was to see how we could introduce ourselves again to the community and I think we have been successful at that,” says the Rev. Patrick O’Connor, the church’s pastor.

The June 10 worship service in particular was a centerpiece event of the celebration, attended by hundreds of members past and present, politicians, representatives of other local churches and organizations that originated from First Presbyterian’s ministry, and Executive Presbyter Tony De La Rosa of the Presbytery of New York City.

“The worship service was an inspirational time for us.  We tried to capture the fact that so many generations of faithful servants helped to keep this church going,” O’Connor says.

The Jamaica YMCA, Jamaica Hospital, Princeton University, The House of Hope, and a number of other area churches got their start from ministries of First Presbyterian Church in Jamaica.

“The legacy we have is a legacy of service to the community,” O’Connor says. “Every generation has had to interpret ‘what is God calling us to do now.’ Having gone through this 350 year celebration, in reviewing the history of the church what’s been really helpful is just to see the way every generation looked upon the community, looked upon the calling of the gospel and said, ‘well, this is what we are being asked to do at this time.’”

O’Connor says this opportunity to honor the history of the church has also given the congregation a renewed vision for its future as it moves ahead in a very different community than the one that existed at its founding.

First Presbyterian has survived for 350 years as people, backgrounds, races, situations, needs and circumstances have changed.  A nation has been born, wars have been fought, populations have shifted and the church is still here.

O’Connor credits a combination of the church Session’s vision, great pastoral leadership over the years, and intentionality on the part of all for First Church’s continuing presence.

“I think to be able to respond to a new community or to a diverse population, both the staff and the session have to be intentional in saying this is what we are seeking to do, these are the people we are seeking to embrace,” he says.

He says it’s a matter of “fighting against the spirit which says ‘this is just for us.’

“A lot of churches struggle with that even when they are dying, they are still thinking this is just for us,” says O’Connor. “A church is God’s gift, its God’s instrument for the world and so always having this outreach intention has helped us.”

“Part of that strategy involves how we create a more welcoming culture, how we brand and market the church more aggressively,” O’Connor says.

The anniversary celebration presented a great opportunity to put that branding and marketing into practice.  It also presented an opportunity through the Gala Dinner event to raise funds for First Presbyterian’s newest community outreach program, The Tree of Life Outreach Center.

This family resource center will offer vulnerable youth and families in the community a broad range of resources, tools, support groups and programs to foster development, self-sufficiency and improved quality of life and will continue the church’s legacy of service.

“I think the calling of God to every church and especially a mainline church like ours is the importance for us to be bold in representing God,” O’Connor says. “So many of our churches have not believed in the power of the gospel to transform and change lives. I think that rediscovered belief for us has given us new energy and new passion to do the things that God is calling us to do.”

Toni Montgomery is a frequent award-winning contributor to Presbyterian News Service. She lives in Statesville, N.C., where she serves as church secretary for First Presbyterian Church of Statesville.