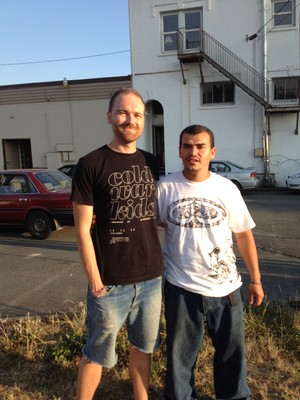 Chris Hoke found Jesus in the Skagit County Jail … not as a prisoner, but as a pastor.

That’s quite a change for the southern California native, who says “the evangelical churches I grew up in just didn’t seem to be practicing the gospel they were preaching.

“Seven and a half years ago, after college, I came from UC-Berkeley to work with Bob Ekblad [a Presbyterian minister and founder of an ecumenical ministry here called Tierra Nueva (“new earth”)], Hoke says, sitting at a sun-drenched picnic table outside the ministry’s weathered downtown storefront.

“I was suicidal and depressed, loaded with good ideas but not wanting to do secular work because it seemed so empty,” the relaxed, bearded redhead says. “I had heard about Bob doing radical theology in community settings. I went with him on a summer mission to Honduras and then came up here where he was starting Tierra Nueva.”

According to its website, Tierra Nueva “is an ecumenical ministry dedicated to proclaiming the Good News of God’s reign (on earth as it is in heaven) in solidarity with the oppressed for our mutual liberation, healing, empowerment, transformation, and total salvation.” It receives significant support from the Presbyterian Church (U.S.A.)’s North Puget Sound Presbytery.

The Skagit Valley in northwest Washington is a rich agricultural region and its population includes many migrant workers. Tierra Nueva reaches out to them in many ways. “Bob took me to the prison,” Hoke says, “and when he blessed the biggest meth (amphetamine) cook in the valley, it was like reading the gospel in Jesus’ own context.”

Hoke was particularly drawn to the young Chicano prisoners. “These guys, all gang members, were my existential doubles,” Hoke says. “They wanted nothing to do with the church, but they came to our Bible studies ― they wanted to know if this God I was talking about was for them.”

The result of those jailhouse Bible studies was “mutual conversion,” Hoke says. “I found in these tattooed gangster guys the peers I needed to make the gospel real for me. We recruited each other for Christ. They started calling me ‘Pastor for Homies,’ which I can embrace because they think of a pastor as a shepherd ― I’m a pastor of black sheep.”

Desperate to break the cycle of recidivism that takes these young Hispanic men on a seemingly endless loop from the streets to jail and back again, Hoke commandeered one corner of Tierra Nueva’ building to try and establish a residential community. “I live here and tried to get some of these guys to come live here, too. Ramon was the first.”

Ramon started coming to Hoke’s jail Bible study while awaiting trial on a trumped-up rape charge ― he’d been set up by a rival gang member. While studying Jesus’ teaching on forgiving enemies, Ramon broke down and gave up a long-held grudge against a man who had killed his brother in Juarez, Mexico.

Shortly after that act of repentance and forgiveness, the rape charges against Ramon were dropped. “Ramon took the very literal interpretation of forgiveness from the Bible and got a concrete result,” Hoke says. “He knows the two are connected.”

That conversion changed Ramon. “I was tired of being an a**hole and I was tired of spending all my money on stupid s**t,” he says.

When he was released from jail, Ramon ― a big-time leader in his gang ― moved with his kids into Tierra Nueva. Subsequently, two other released gang-members and their families moved into the now-established community. It’s become a growing source of support and belonging ― a family ― that Hoke says is a natural outgrowth of the Gospel.

“We’re all looking for discipleship and family ― what Paul calls ‘a spirit of adoption,’” he says. “What we’re doing here is not some social program for a particular demographic. This is adoption into God’s family. It’s redemption and community. We’re no longer orphans but sons and daughters of God.”

Ramon says Tierra Nueva’s gang ministry is as simple as “sharing our love of God with others. It’s like God called me to do this. Other gangsters see us with our kids and they want that, too.”

It’s the kind of “incarnational theology” that drew Hoke and now Ramon to this ministry.

“You can try to give these guys advice,” Ramon says, “but it’s seeing the goodness in others that makes the Gospel real and makes people want to change. The reality for us gangsters is falling in love with God and Jesus Christ, who accepts communities no one else will accept.”

Part of breaking the cycle of street-to-prison-to-street recidivism is employment. Tierra Nueva, with seed money from North Puget Sound Presbytery, has helped launch a number of small businesses. Ramon has started an auto-detailing business that exclusively employs former prisoners.

What about the gangs?

“We’re not trying to dismantle the gangs,” Ramon says. “That’s God’s job. We’re just trying to love these guys with Christ’s love until they see and feel that love. We see God in each other and it gets really contagious.”

Adds Hoke: “This isn’t social work. This is discipleship.”

To support this and other ministries of Tierra Nueva, visit its website.