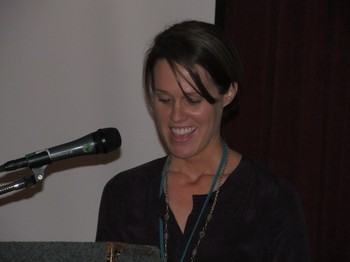 As the disciples of Jesus were told to lighten their loads for the journey to follow him, believers today are called to shed the burdens they carry and follow Christ, the Rev. Sara Hayden told worshipers at the PC(USA)’s Disciple-Making Conference here this evening (Jan. 22).

Following the conference’s theme ― “This Is Our Story” ― Hayden, an Atlanta-based church planter, challenged her listeners to “replace our existing narratives” of doubt, fear, rejection and the world’s criticism and condemnation and adopt “the power of living into [Jesus’] reality that is better than the story we’ve been taught.”

She told the story from Mark of Jesus dining with Levi the tax-collector, surely an outcast in his own society. In inviting Jesus into his home, Hayden said, “Levi accepted Jesus’ truth rather than the prevailing narrative that he was a bad guy. He accepted another reality than the rejection he had experienced until then.”

Hayden recalled baptizing her nephew, Sully, in December. At the service was a 6-year-old family friend who asked her what the baptism meant. She explained that “nothing is more important than baptism because it [adoption by God] is final and forever.”

The child, Kyler, ran to his mother and said he wanted to be baptized because, Hayden related, “I don’t just belong to mommy and daddy, I belong to God.” He told a truth that transcends all other realities, Hayden said, “that he’s a member of the household of God.”

The disciples dropped their nets to follow Jesus. “What can we drop in order to follow?” Hayden asked, and made time for worshipers to write down their thoughts. “All those burdens are transformed into utilities for service in God’s kingdom,” she said.

Speaking of Jesus on Calvary, Hayden said, “Having been deserted by most of his family and friends, in a wild last act of inclusion, He invited the hanging thief next to him into the kingdom with him.”

She said, “The world looks at our weird families, like those gathered around him then, and criticizes him for hanging out with people like us. And we say, ‘Thank God!’”